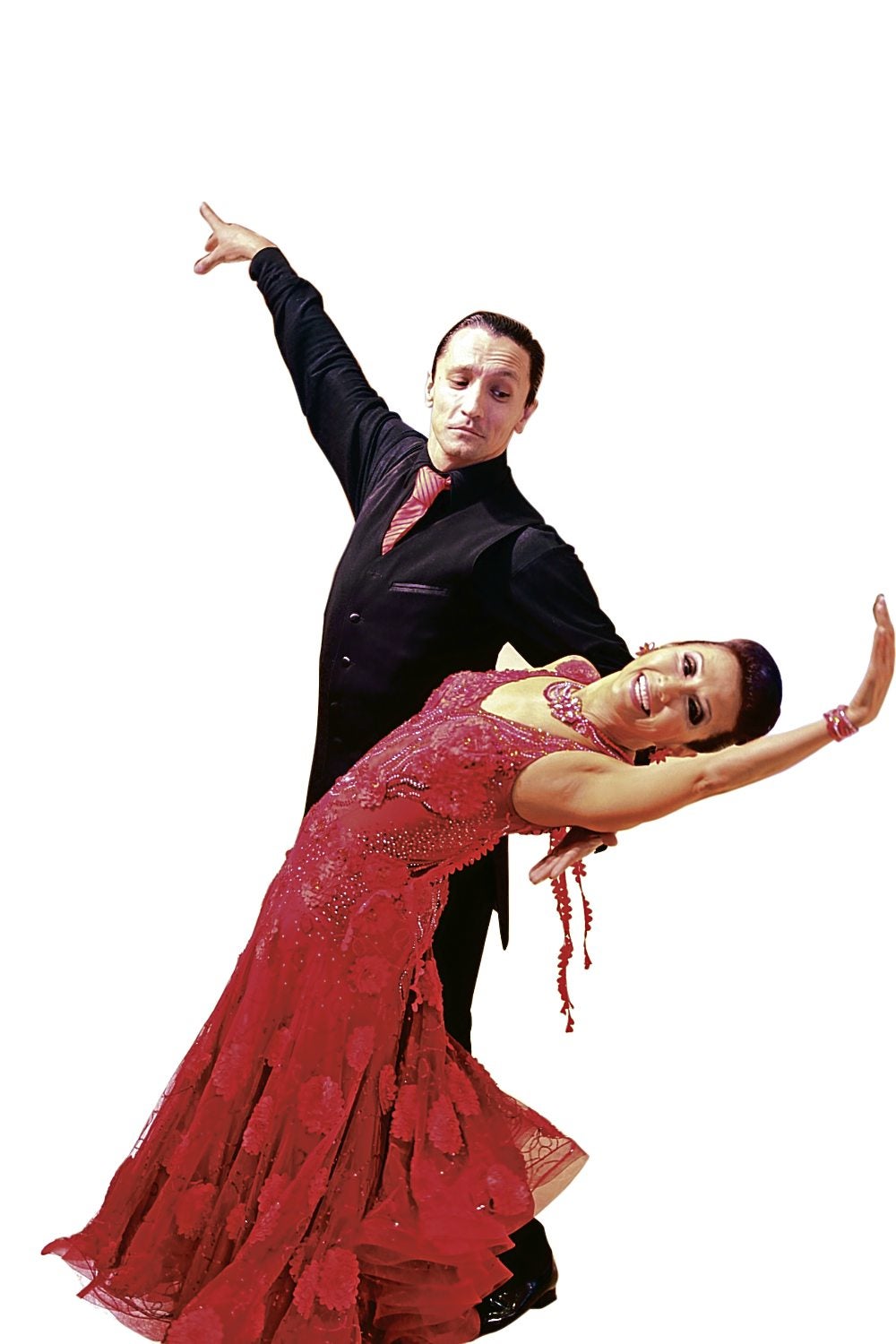 PINKY totally commits herself to the dance.

At 63, Pinky Puno makes the dance floor her comfort zone

Poised and elegant, ballroom dance proponent Michaela “Pinky” Puno moves with feline grace.  Watching her, you don’t sense at all that she’s had shoulder surgeries, a hip replacement and partial knee replacement.

“I still have this great feeling that there’s still more in store for me,” said Pinky. She is 63, yet she still has a girlish mien when she dances.

Since midlife, she has been devoted to dancesport.  On July 28, she will open a  ballroom studio called Avant Garde Ballroom Dance Center in Greater Washington, DC.

She fuels her passion for dance by joining competitions in the senior bracket (over 35 years old). From July onwards, her competition calendar is full. When she visits the Philippines, she hopes to contribute to the growth of the local dancesport scene.

Pinky has always been single-minded about her dance. In her teens, she performed with  the Hariraya Dance Company,  appearing with Maniya Barredo, who became a great prima ballerina.

Pinky was in her senior year at Maryknoll (now Miriam) high school when she proved her mettle in dance.  During the era of inter-school song festivals, Pinky’s choreography for the song “Greensleeves” won the top prize for Maryknoll.

Pinky’s father, the foremost architect Felipe Mendoza, noted how  enthusiastic she was to teach ballet so that he built a studio below his office  in New Manila, Quezon City.

Pinky was only 19, a college sophomore, when she married Ronaldo Puno in 1968. The groom had just graduated from Ateneo, with a Political Science major.

“I could not continue college studies. I was pregnant and teaching until two weeks before I gave birth. My sister Sally would take over my classes,” she said.

Although the marriage bore seven children, Pinky had more kids to take care of in her dance school. Her students called her “Ms Pinky.”

“I was a disciplinarian,” she said.

More than just being strict, Pinky ran the school efficiently. She acted with a sense of purpose and moved quickly.  She set high production standards in her school recital, presenting her 250 paying students at their best.

In 1987, the Punos migrated to Virginia when the children, in school, could no longer take the pressure of politics. Puno was Local Government undersecretary, under Secretary José Roño.

“We didn’t have the same political views. The children were getting the flak,”  Pinky said. “But things worked out for the best. In America, they learned how to do house work, were not embarrassed to wait on tables, made sandwiches or cookies for restaurants, lived on a budget, became independent-minded and learned to speak up. It also taught them to be responsible for their actions.”

She was in her 40s when she was raising her seventh and youngest child in the US without any household help. “It was great though because I learned to be everything—yaya, labandera, plantsadora, cocinera, driver, hardinera.”

Still, Pinky volunteered to choreograph and direct the spring productions in her children’s school. Teachers would complain about how unwieldy the students were during rehearsals. However, the principal would commend Pinky for taking command of the students.

“I  never worried about 40 being over the hill. I was involved in too many things, and never once felt that my life was going downhill,” said Pinky.

Meanwhile, Puno would be shuttling between Manila and Virginia. From the Ramos to the Arroyo administrations, Puno was involved in Philippine politics.

“It’s hard to raise kids in a political family.  They tend to think they’re above the law. We wanted to raise the kids in the States so that they would learn to follow rules,” she said. “With seven kids, they went through their turbulent teens, but they turned out to be great. They are parents now. God was watching over us.”

When Puno joined the Arroyo Cabinet, Pinky stayed behind in the US and flew back to the country only to be with her husband and attend important government functions.

The long-distance relationship worked. “He wanted it that way so that people would not use me. Sometimes he would teach me: People are going to say this and that. Learn not to offend anybody. You have to say things kindly so that you don’t get involved,” said Pinky.

Their marriage has lasted 44 years, beating the odds that teen marriages wouldn’t work. Asked the secret, she said, “Believe it or not, it’s love. We’re totally opposite. I like to socialize. He likes to stay at home. Although Ronnie appreciates the arts, he will not go out of his way, unlike me. I’m not keen on politics but he’s very supportive of my dancing. We let each other be.”

In America, Pinky was mesmerized by a ballroom dance competition she watched on TV. She then  challenged herself to take it up.

On one of her regular visits home, she learned from Jojo Cariño, who taught the Latin dances. Eventually, the pair competed in America.

A turning point came when she was buying ballroom dance shoes. The woman, who sold her the shoes, learned that Pinky would fly in her partner from the Philippines. She then recommended Slava Sergiev, a Russian teacher who also competed in the professional division.

“When I started joining competitions that entailed hard work, I built a small studio in our basement so I could practice the basics.”

Initially, Pinky’s children were concerned because she was already 52 when she started competing, the age most dancers retire.

“I found a sense of purpose again in my 50s—something I had in my 20s and 30s when I was teaching ballet. This time it was not teaching but learning something new for myself. I totally submerged myself. But then I worried. What would people think about my taking this up at this late age? Traveling and competing in my 50s? Ballroom dancing did not have a great reputation in Manila. Would the people there think any less of me? But when you’re in your 50s and you are secure about yourself and your family, you dismiss these worries and do what you love to do.

“In one competition in San Francisco, my daughter said, ‘I can see why you love it so much. You’re having fun.’ They see how radiant I look  while dancing on the floor.”

Pinky enjoys Latin dances because  they become vehicles to express herself in various ways. She could be flirtatious in the cha-cha,  theatrical in the paso doble, playful in jive, perky in samba, sensuous and romantic in rumba, and dramatic in the tango.

She put her ballet training to good use in the American Smooth,” a style that is synonymous with Fred Astaire’s combination of the waltz, foxtrot, tango and Viennese waltz.”

Her biggest asset is her total commitment to the dance.

Pinky’s talent as a producer was revived when Cariño, president of the Council of United Professional Dance Teachers, sought her help to organize an international ballroom competition. Her plan was to attract the world’s best dancers and hold it in a classy venue.

In 2008, Pinky sought the help of then First Gentleman Mike Arroyo and then Tourism Secretary Ace Verano.

Pinky boldly sent invitations to world champions even if they didn’t know who she was. Fortunately, she had been working with top choreographer Taliat Tarsinov, who created her competition pieces. He put in a good word for Pinky when he met the champions.

Tongues wagged as Pinky pulled off those events because of her government connections. She had to defend her vision. “Starball would give the Philippines great exposure. It would bring top international competitors. Visitors from Singapore, Malaysia and the US flew in,” she said.

With tickets at P10,000 each, the competitions were sold out.

The event was covered by major dance publications in Europe. Word got around in the international dancesport world about the production quality of Philippine Starball. At the Blackpool in London, the Olympics of ballroom dancing, the participants lauded her for her efforts.

Hoping for a revival

Now that Puno is no longer high-profile in politics and is into the construction business, Pinky still hopes to revive Starball in 2013.

“I’m hoping, but there’s politics in the dance world,” she explained. “One reason for Philippine Starball was that amateurs could dance with the best in the world and be judged by the top judges.”

Challenges and all, Pinky will always return to her comfort zone on the dance floor.

“Stanford research showed that of all the physical activities, dancing is No. 1 in preventing Alzheimers’ disease. When you have a passion for something like dancing, you love it. Even if you don’t have time, you make time for it and enjoy it.”