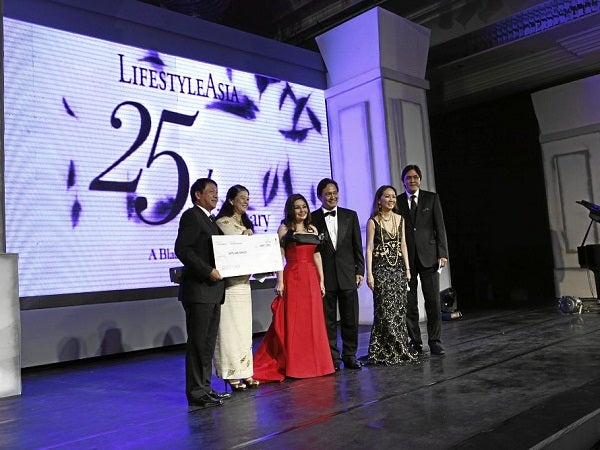 “The black swan is a metaphor for a philosophical concept describing a rare event with far-reaching effects long after it has transpired,” said Lifestyle Asia editor in chief Anna Sobrepeña during opening remarks. “Twenty-five-year anniversaries happen only once in a lifetime. That’s what makes it rare.”

The tree installation also underscores Lifestyle Asia’s commitment to the environment. In the last few years, as a way of giving back to the earth, it began planting trees for every page the magazine used to print its monthly edition, said Sobrepeña.

“The seeds are not only symbols of dreams and possibilities,” she added. “They will become gardens and forests as we continue to partner with those who believe that great things come from small beginnings.”

Cruz had the seeds wrapped in envelopes made of parchment paper. Each envelope was suspended from the ceiling to form tree leaves over a trunk.

To emphasize the contrast between black and white in his table settings, leading floral arranger and event stylist Robert Blancaflor played with white and crystal elements in the form of roses, candles, wrought-iron candelabras and dangling beads on black table cloth.

Lifestyle Asia had reasons to celebrate. As a member of the One Mega Group Inc. family, the high-society magazine has emerged as the leading glossy in its category for five years now in annual surveys conducted by global market research firm Ipsos Media Atlas (formerly Synovate).

Yang, a trained classical singer, belted out such staples as “O Sole Mio” and “Volare,” while Zubiri, with Tiu on the piano, sang “I Love the Way You Love Me” and “Back for Good.” Classical singer Stephanie Reese and live-wire pop performer Bea Tantoco also performed.

Shangri-La Makati’s chefs came up with an Asian-inspired menu. Champagne and paired wines provided by Moet Hennessy flowed all night.

Donations from such influential Filipino companies as CVC Law Center (aka The Firm) and SGV & Co. accounting firm went to chosen advocacies such as Gifts and Graces, The Joy of Urban Farming and Preparation Smile. Inquirer President and CEO Sandy Prieto-Romualdez received the donation for Gifts and Graces.

As fitting start to Lifestyle Asia’s next 25 years, Sobrepeña also called the guests’ attention to the magazine’s redesigned logo.

“Earlier, we saw an excerpt by dancers of Ballet Philippines,” she said. “The performance of the dying swan is a valedictory prefacing new things to come. Our redesigned logo is the signpost signifying changes to address the evolving taste of our readership.”