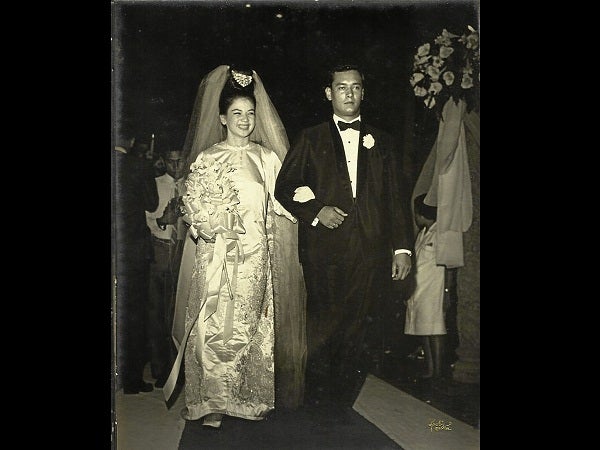 In her speech at her parents’ wedding-anniversary party, Tina recalls walking accidentally into a bedroom scene straight out of “I Love Lucy,” the popular ’50s television show. There was her mother, Betina, holding a pitcher of water over her father’s, Chito’s, head.

“Tell your father to say sorry to me!” Betina commanded her daughter, who stood transfixed. Before she could say or do anything, her father, to make matters worse, as he is wont to do under such circumstances, pushed his luck, mumbling something to her other than sorry and triggering his untimely bath, which had the effect as well of dousing the flames of their misplaced passions and launching themselves into raucous laughter.

“That’s how those spats usually end,” says Tina, 29, an only daughter, arriving after three boys.

And that’s how Betina Kahn and Chito Legarda’s marriage, celebrated on Sunday, June 17, has lasted all these 45 years.

Everything going for them

It all began with an elegant wedding at San Agustin Church between a young and beautiful bride, Beatriz (Betina) Khan and an older, much taller, and good-looking bridegroom, Celso (Chito) Legarda, both of prominent parentage. From the start they had everything going for them.

Betina became a more or less traditional wife and mother. She cooked particularly well and loved cooking enough to turn it from an aficion into a thriving catering business. I imagine her a dream daughter-in-law, but especially for the Legardas, who themselves love to cook and eat and who have, in fact, had among them their own famous chefs like Bombona and Moning. Chito, on his part, became a successful businessman.

After four children, who that night thanked their parents for the gift they all “treasured most,” their constant presence, Betina and Chito decided to direct their energies toward political causes, and in so doing expanded their friendships and their world.

Answering the question on everybody’s mind—why they didn’t wait until their 50th year to celebrate as grandly—Chito took the microphone and between chuckles announced, “This is only practice.” That should excuse, he said, the haphazard planning that ended up in all sorts of confusion—invitations unsent (“Some are still in my car”) or sent late or lost. “With all this practice,” he said, “the 50th should be smoother.”

The couple was surprised that, despite all the faux pas and the rain, there was an almost perfect attendance by what Betina called a “handpicked crowd,” actually largely family—the Legardas, the Kahns, the Aranetas, and the Lobregats, of the understatedly old-rich; no one was overdressed or eye-poppingly jeweled. Being around them was both a pleasure and an education—they were self-assured, indeed with nothing to prove, warm and friendly.

Among friends present were those from their “street life,” their expanded world: journalists like my husband, crusading lawyers, political victims like Jun Lozada and Ariel Querubin. I was myself a straddler: a relative on the Roces-Legarda side and wife, as happens, to an outspoken observer of the sociopolitical scene, and as much a regular street advocate as a partaker at the dinners Chito and Betina host for advocacy, commemorative or yet other reasons.

Betina is remembered famously from the street rallies, as the “sandwich lady” who practiced a sort of reverse discrimination: Her sandwiches are intended exclusively for the poor. “One look and she knows,” said Merily Orosa, who herself was once stopped before she could squander Betina’s generosity on an unworthy beneficiary. “She restrained me: Hindi poor ’yan.”

Looking around, I spotted Erap, himself the self-proclaimed champion of the poor. That night he looked and comported himself every bit like the true Ejercito that he genuinely is, favorite son of Mary, sharing a table with some from his old Cabinet, most of them de buena familia themselves. He had just bought the Legarda property in Sampaloc and appeared to share a comfortable friendship with the former owners.

Joseph Ejercito Estrada surely knew when to leave properly earliest—after the wedding giveaways had been distributed: traditional wedding cookies, a wafer-thin version of Russian teacakes, powder-puffed with confectioner’s sugar “to ensure happiness and sweet joy,” that wish printed on the tag pasted on a dainty acetate box tied with a thin, blue ribbon.

It was a great relief that no one asked for one more giveaway to bring home or filched the flowers, vase included, arranged on every table.

Indeed, the affair brought back all those proud traditions sorely missed today, without taking away from the laughter and the fun.