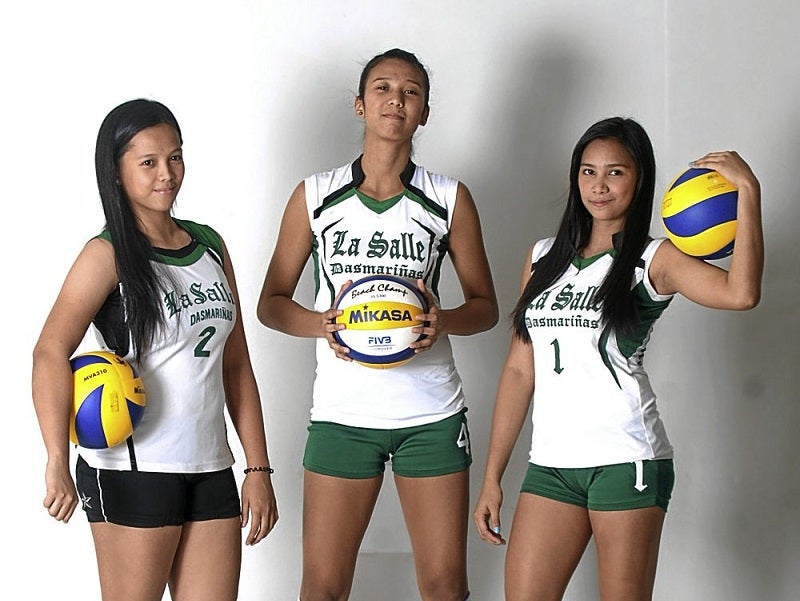 Never mess around with the Yongco sisters and don’t be fooled by their youthful innocence and playfulness.

Though each one is a looker because of her height and pretty features, Iari, Iona and Iumi Yongco are mean athletes who are ready to take all comers.

But due to their difference in height and skills, Campana said the sisters have different styles of play.

“Iya’s strength lies in her blocking, while Iumi, because of her leaping ability, is a powerful spiker,” noted Campana who owns six NCRAA crowns on top of PRISAA titles and back-to-back national games crowns. “Iona is very hard-working and the team’s cheerleader.”

But the three are far from perfect, he added. Iona’s jumping ability can use a lot of improvement while Iumi must correct her erratic service and court sense, he noted. Iya, too, is prone to committing mistakes due to lack of focus.

Despite these weaknesses, the trio has set themselves apart from other players with their fighting hearts.

“They are ready to die to save that ball,” said Campana, an observation shared by athletic director Gery Sergio. “Never-say-die: The Yongco sisters won’t quit until the end of the game,” he added.

Despite their different playing styles, the three sisters are clearly supportive of each other.

“We love, support and care for each other. We like to protect each other,” said the eldest, Iari, of her relationship with her sisters, putting to rest any hint of sibling rivalry that observers might impute on them. Iari was picked Most Valuable Player in the action-filled NCRAA volleyball wars.

The protectiveness extends to her scrutinizing her sisters’ suitors.  Because though Iari, popularly known as Iya, has a boyfriend from the varsity basketball team, she doesn’t mince her words when it comes to guys lining up to woo her twin siblings.

“I am strict when it comes to their suitors and tell them clearly that I don’t like this or that guy,” said the 21-year-old Iya, a Tourism major.

At 5’11”, Iya is the tallest among these three volleyball-playing sisters. Twins Iona and Iumi stand at 5’6 ½”.

Though they live under one roof, the Yongcos have different tastes when it comes to movies, food and men.

Iya, who learned volleyball only two years ago, swoons over tall and athletic guys. Her boyfriend, Mark Laurence Igtiben is 6’3” and plays small forward for the Patriots. She prefers action movies and likes Tom Cruise and Angelina Jolie.

Iona, who is one minute older than her twin Iumi, likes screaming her lungs out while watching horror movies where bloody heads and limbs tumble out on the screen without letup. Surprisingly, she also cheers for looker Zac Efron of “High School Musical” and singer-actress Emma Roberts.

A Physical Education major, Iona seldom joins her sisters in gimmicks. She’d rather cook, she revealed. “I like to cook all types of food. I really don’t want to go out often,” she said.

The siblings also share a common interest in music and like to sing and dance. “We play the guitar,” said Iona. “Music is a form of relaxation for us.”

While dreaming of donning the country’s colors in international competitions, Iya said she’d like to join the country’s police force or become a stewardess someday, while Iumi and Iona look to a possible career in broadcast.

The Yongco sisters credit their parents Ireneo, 49, and Marlene, 53, for their athletic abilities.

“Our parents are sports-minded. No wonder they encouraged and supported us when we plunged into sports,” said Iya. “Even our Kuya Ien likes sports,” she added, describing the Yongco’s first born, a graduate of Marine Engineering.

Six-footer Ireneo, a government employee based in Hagonoy, Bulacan, met Marlene while he was playing for the Far Eastern University Tamaraws in the UAAP volleyball championship. Marlene saw action with the Amazons, which is the University of the East women’s basketball team.

“UE and FEU are neighbors. [Our parents were] sporting rivals. I bet my parents saw each other in the University belt,” said a giggling Iya.

But talk about marriage is farthest from their mind, the sisters agree. “We’re still young and we have plans. Marriage can wait,” said Iya.

Now that’s good news for the country’s volleybelle tourneys, but definitely bad news for all the Romeos out there. •