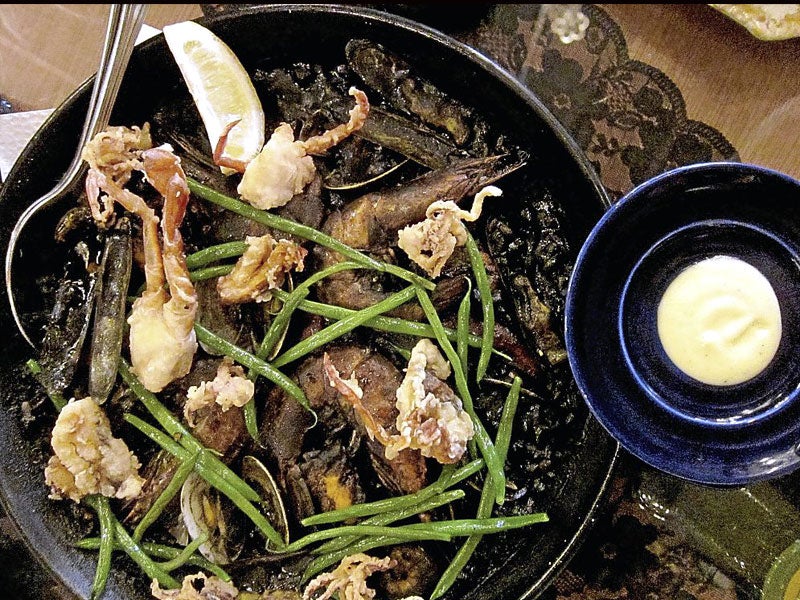 Forever in the Milky Way

Last July 3 was a sad, sad day not only for the family of Julie Araullo Gamboa, founder/ owner of Milky Way Cafe, but for those of us whose lives the Gamboas have touched, whether directly by way of their exuberant personalities or indirectly by way of their vibrant cooking.  Malu Gamboa is the best friend of our publisher Leica Carpo while I had a brief but bright breakfast encounter with Mrs. Julie in Singapore.  The bad news is that their family matriarch has passed away; the good news is that her spirit will live on forever through the legacy that is Milky Way, a Filipino restaurant on Pasay Road, Makati.

The American family that had introduced Milky Way ice cream to the Philippines by way of an ice cream parlor on the Malacanang grounds sold the business to the Araullos, who later supplied the ice cream to various shops in Manila. This went on until they moved to the Makati Commercial Center food center before taking over Anson’s Makati food court.

What began as a small kiosk (located in a building that at the time would be considered a mall) expanded until it occupied the entire floor.  The business now has an entire building that carries not only Milky Way but also the Spanish restaurant Cirkulo, the Japanese restaurant Tsukiji and the Thai restaurant Azuthai.

Proving that it can withstand the test of time, Milky Way, decades after its rebirth as a restaurant, still gets oohs and aahs from diners, and not just for the halo-halo. Revered lifestyle writer Teddy Montelibano just a few months ago posted this rave on his Facebook wall: ”… the lechon kawali FROM lechon de leche is THE end! [M]y search for THE BEST lechon kawali in [M]anila ended when I tried MW’s!”

Compare this to some mall restos nowadays that you observe were well-thought out but no longer thought of.

Cerveseria, one of the later additions to the restaurant row of Greenbelt 3, is a restaurant with a praiseworthy menu: cochinillo, various versions of paella, salpicao and other Spanish favorites. Its interiors are decidedly hip, giving off a Transylvanian vibe without being creepy: a row of white chandeliers hang from the ceiling, candles line the bar window and bookshelves give the feel of being in a count’s personal library.

There are items on the menu that have a lot of potential: the Iberican chicken (Pollo Iberico), especially if ordered a day before, is swimming in flavor; the cochinillo is surprisingly lean; and the gambas is addictive. There are items that are highly recommendable: The Shimeji mushrooms (Setas Shimeji Fritos), definitely the most recommendable appetizer, is salty but not in a blatant way. So before you know it you’re asking for a second serving. The Pasta Fideos is a most interesting twist on the paella: pasta cooked paella-style, with all the flavors of paella but using angel hair pasta—it’s brilliant!

But it will take a lot of extra effort before this becomes a favorite Spanish dive in the metro. For all we know it may not even be the restaurant’s objective; maybe the objective is just to give diners a good time at Greenbelt. But that would be a waste as its concept and creation allow it to be among the discerning metro’s favorites.

The most classic of Spanish dishes, the paella is acceptable but falls short of memorable. The paella Cerveseria is beautifully presented, completos recados, with chorizo and even soft shell crabs in the paellera; ditto for the paella negra. But for some reason, the impression falls short of making a real impact. The Chorizo Iberico pan con Chocolate – chorizo laid out on a slice of bread with a hazelnut chocolate spread – is a beautiful concept that mixes salty and sweet but here it doesn’t quite match.

The servers are welcoming and accommodating but in the hustle and bustle of the evening’s events, may hit your face with their elbow as they lay down the food on your table – not once but several times. It may also take a while before you catch their attention although they are not busy with other tables. Maybe the interiors are too relaxing?

That is where the difference lies: when the family business is really made the family’s business. Whether at Cirkulo or Milky Way, servers are on alert as Malu Gamboa herself makes the rounds – making sure that each customer is happy. Or you may catch Chef J Gamboa peeking from the kitchen to personally explain the difference between Jamon Iberico and Jamon Serrano. The result is an experience that is consistently memorable, with the family’s love for food and entertaining felt by each customer.

And that is how a restaurant not only survives but thrives: It establishes itself not only on the map but also in our hearts. Other restaurants should follow suit if they want to be remembered – at least in  the diners’ minds. This is how Julie Gamboa’s legacy will live forever. •