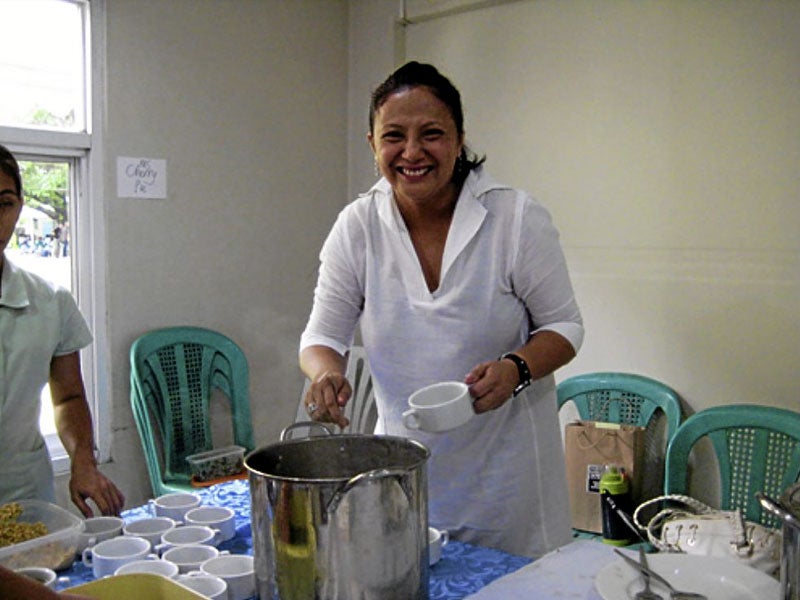 A Helping of (Food) Justice

Chef Myke Sarthou brought in slow-roasted honey-glazed pork served with pumpkin puree and bracelets of string beans grown by Nita Oigoan in Rizal. The puree was topped with edible blue ternate petal.  Sarthou’s pork comes from a farm that raises pigs the natural or organic way. Sarthou is chef at a reservations-only, private dining place in Quezon City.

Food growers, food producers, food providers – all of them women – paired up with Manila’s noted chefs at the recent “The Good Food Lunch” hosted by Oxfam-Philippines. Breaking bread at the launch of Oxfam’s food campaign were artists, lovers of food and the planet and civil society groups. Showbiz celeb Marc Nelson emceed the event.

Held at the Bantayog ng mga Bayani Gardens in Quezon City, the lunch was not just a culinary event; it was a mind-opener that stressed the importance of growing food the right way, in the right places and by the right people to feed an increasingly hungry world.

Sadly, it is these small land holders and food producers in countries rich in natural bounty who often suffer want and hunger because of inequities in the world’s prevailing economic and social systems. Rising food prices, devastating weather changes, political strife and global financial meltdowns conspire and cause a billion people to go hungry.

And so Oxfam is sounding an urgent call to action: Food justice in a world with limits.

Founded in Great Britain, Oxfam is an international non-government organization working with various groups and communities to end poverty and suffering.

But is the right food to sustain a hungry planet  pleasing to the palate as well?

To taste is to believe, so it was only fitting that Oxfam pushed its worldwide food campaign through a gustatory event. The catch words to remember: “GROW: Food. Life.  Planet.”

The forum held as “aperitif” to lunch explained the necessity of the Good Food lunch.  As Oxfam described it, “Our broken food system cannot feed the world in this new age of crisis. Decades of slow progress in the fight against hunger have been swung into reverse. Growing hunger, obscene waste, rising and volatile food prices, environmental destruction and the scramble to buy up land across the developing world are symptoms of a food system in chaos.”

As the forum speakers explained: “As natural resources become increasingly scarce, and climate change brings extreme and erratic weather, feeding the world will get harder still. Oxfam’s GROW campaign is calling for a radically new approach to the way we grow, share and manage food and other natural resources. Business as usual is not the answer.”

A grim food scenario, indeed.  But solutions should not be hard to come by. (See sidebar) Women are a big part of the solution. Life givers and nurturers, they rock the cradle and the world and are key to feeding a hungry planet.