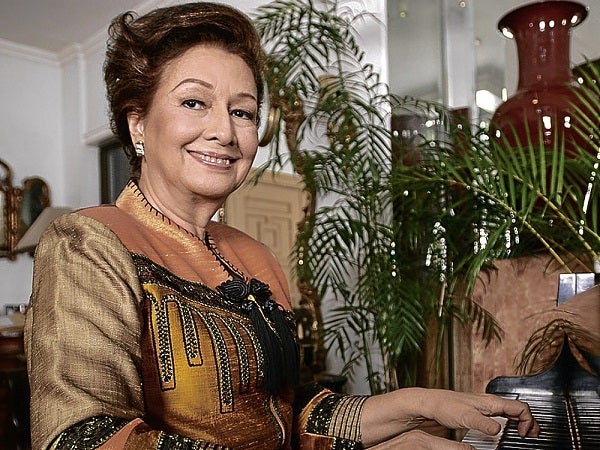 The day the angels came–again

La Concordia College sprawls on three and a half hectares on the former Herran Street (now Pedro Gil), where it began in 1868 as Colegio de la Imaculada Concepcion de la Concordia. Both lot and school were a gift from Margarita Roxas de Zobel to the poor of La Concordia Estate in Paco, Manila, which she owned; she was the first angel to come.

Impressed with the works of the Daughters of Charity among them, Doña Margarita sent for eight more nuns of the order from Spain to manage the school—they were the next angels.

The angels collaborated. Doña Margarita funded it as a free school, and the nuns not only ran it, but also made up its core faculty. The quality of its education so improved that La Concordia began to attract girls from prominent families; three of José Rizal’s sisters—Saturnina, Soledad and Olympia—and two of his own sweethearts—Leonor Rivera and Segunda Katigbak—all studied there.

It has one of the oldest music departments, but, shifting toward more basic and practical courses, it has through the years lost its strength in that department. Two upright Kreutzers from the early 20th century, however, still stand in its music room, among its credentials. They have kept their big, bright tones, in fact perhaps a little too big and bright for the walls of the little room to take.

It was amid such felicitous history that on July 4, concert pianists Ingrid Sala Santamaria and Reynaldo Reyes, her onetime teacher and now her accompanist, gave a concert there—a Chopin concerto (No. 1 in E Minor, Op. 11) and a Mendelssohn (No. 1 in G Minor, Op. 25), both written in 1830, just three decades before La Concordia came to be.

It was an intimate affair perforce—the 20-plus of us in the room threatened to burst it. Actually, it was more than a concert, and only the first of nine free concerts in Metro Manila and Batangas City from July 4 to Aug. 12.

Professor Reyes opened with a short talk about concerts in general, about the pieces themselves, about the milieu in which they were created, and about the composers. After the performance, both pianists took questions. My husband and I felt especially gratified at not only being treated to a virtuoso performance of the melodic music of the 19th century—the Romantic era—but also being educated in it.

At any rate, the more intimate history to which I was brought back was of only 35 years ago: My only daughter, Gia, in high school at Assumption Convent—at the other end, the upscale side of Herran in bustling Ermita—was at La Concordia only for her first piano recital.

It was a proud day for a mother who had herself passed up chances to learn piano, and was now vicariously living a late-blooming dream through a daughter who was later to confess she was only trying to please me; her first recital was also her last.

Now I came to the concert without any agenda, only predisposed as a happy concertgoer. A former head of the music department, Araceli Concepcion Agoncillo had invited me and my husband and other friends. Cely had settled in the United States with her family upon retirement, and has been coming home for reunions and musical projects like this concert. She also happens to have been Gia’s piano teacher.

Learning many years later of Gia’s daughter Rory’s more genuine interest in piano and suspecting some promise in her, Cely brings her books about great composers and pianists every time she visits. Rory plays on a Kreutzer, too.

On her own Kreutzer, Ingrid Santamaria was a delightfully infectious picture of grace, power and emotion. Having obviously given her all, she ended in sweet triumph, lifting her hands in the air and leaning away from the now silent piano.

I caught Cely, seated across the aisle from me, wiping tears. “I remember how hard I myself worked on the same Chopin concerto to achieve the same perfection I’ve just heard now,” she told me.

My prime music education for the day happened when Professor Reyes said that, unlike the soloist (Ingrid in this case), the orchestra (him) is not expected to memorize the score, being a collective that must play together, conducted, in concert. He set me straight, eradicating once and for all my disappointment—that the orchestra has to be helped with scores in front of them, while the poor soloist has to have the whole piece memorized.

We, a lively audience, came away not simply entertained, but smarter and with improved memory, what with new neurons grown in us by listening to the two concertos, and possibly kept further away from Alzheimer’s—it’s a scientific finding, said Reyes.

Music study, according to him, develops an organizational sense, along with the virtues of patience and perseverance. After all, he said, “It’s not easy to learn a sonata,” let alone play it perfectly. That’s why, he said, the Ivy League schools are quicker to admit students who have a background in classical music.

What touched me most was Reyes’ sense of conviction and duty as a classical musician and godfather to a special child. He used the power of music to bring miracles into the boy’s life. He played for him everyday. After 10 years, the boy learned to play the violin.

Expressing her own sense of a miracle, courtesy of the two pianists, the superior of La Concordia, Sister Novelia, said, “It is as though the angels have come”—again.