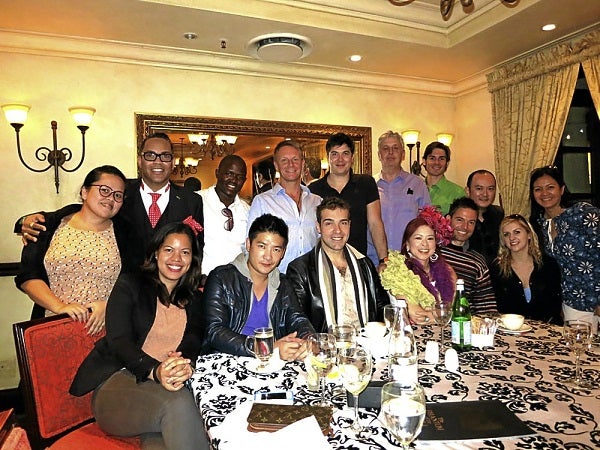 Batman here, the Phantom there–costume balls for the cosplay crowd

Music moves emotions. It is one art form powerful enough to move us to tears. I recall watching Andrew Lloyd Webber’s “Phantom of the Opera,” the world’s most successful and popular musical. Sitting in the dark, I was blown away with awe and delight at the drama the musical could evoke from me.

So it is truly a joy to know that “Phantom” will be accessible to Pinoys starting Aug. 25, when the longest-running show on Broadway starts a five-week run at the CCP Main Theater. With its powerfully moving story, incredible music and astounding sets and costumes, this musical is a must-see.

Due to exceptionally high demand, producer James Cundall, CEO of Lunchbox Theatrical Productions, recently announced an additional 16 shows, extending the season until Sept. 30. Presented by Smart Infinity and Citibank, in cooperation with official carrier Philippine Airlines, “Phantom” is the story of a disfigured musical genius who haunts the depths of the Paris Opera House. Mesmerized by the talents and beauty of a young soprano, Christine, the Phantom lures her as his protégé and falls fiercely in love with her. Unaware of Christine’s love for Raoul, the Phantom’s obsession sets the scene for a dramatic turn of events where jealousy, madness and passions collide.

So it’s a love story with an ill-fated couple plus ghosts plus a famous chandelier. What’s not to like? Over 130 cast and crew are there to ensure that “Phantom of the Opera” will be a sell-out success.

The Manila production is a cooperative venture between Lunchbox Theatrical Productions, David Atkins Enterprises, Hi-Definition Radio and Concertus, in association with The Really Useful Group, the same producers who brought “Mamma Mia” and “Cats” to the country.

Tim McFarlane, managing director of The Really Useful Company Asia Pacific, said that this touring production of “Phantom” is as fine as the West End or Broadway version. It has the same superb sets and designs, and the 230 costumes were executed by international designer Maria Björnson.

The role of the Phantom will be played by Jonathan Roxmouth, a South African who has received numerous awards and nominations, including the Best Performance by a Leading Actor in a Musical at the 2012 Fleur Du Cap Awards.

Claire Lyon plays the equally sought-after role of Christine, the beautiful and talented soprano. Classically trained, Claire graduated from the Victorian College of the Arts at the University of Melbourne in Australia, with a Bachelor of Music Performance. It will be thrilling to hear both sing the classics from the musical, including “The Phantom of the Opera” and “Music of the Night.”

It was great to find out that homegrown talent will be joining the cast for the Manila and Asian performances. Talented tenor Dondi Ong successfully auditioned for musical director Guy Simpson earlier this year as part of the production’s worldwide search for talent.

Bambi Verzo of Concertus took a small media group on a trip to Johannesburg, South Africa, to see the musical and experience it “behind the scenes.” I was thrilled to see the costumes of the Masquerade Ball, complete with wigs, masks and feathers. Company manager Johann Kupferburger pointed out the costume of the Phantom for the mall weighs over 20 kilos!

At an intimate lunch with some of the cast, I had a long friendly chat with wardrobe head Eugene Titus, who said I “outdressed” him and that he was looking forward to seeing my costume when I watch the show in Manila.

The incredibly high-tech stage, complete with hydraulics and moving parts, is quite a production in itself. My dynamic duo partner Tim Yap and I had fun emoting beside the Phantom’s gondola, imagining ourselves onstage along with floating candles.

Travel and shopping buddy Pepper Teehankee posed by the organ of the Phantom and we all pretended to be part of the musical in front the infamous mirror. Pam Pastor and Nathalie Tomada took their moment onstage and stood over the dramatic chandelier as it was being hoisted up to the ceiling.

After watching the show, we were just blown away! The cast is superb, and I am so excited to once again watch Jonathan Roxmouth, Anthony Downing, Claire Lyon and the rest of the cast in Manila.

The season opens on Aug. 25 with a premiere sponsored by Asian Hospital Charities, part of their fundraising efforts to support the medical needs of the underprivileged.

Tickets are available at TicketWorld, tel. 8919999 or www.ticketworld.com.ph.

Another masked man not to be missed is Batman! I just saw “The Dark Knight Rises” at the SM Mall of Asia’s IMAX Theater and was floored by the movie.

So it’s a love story (sorta) with an ill-fated couple (kinda) plus ghosts (nada) plus, well no famous chandelier, but lots of other gadgets like a cool motorcycle. And just like “Phantom of the Opera,” the movie is a costume ball for the cosplay crowd. Which, for that alone, makes it a must-see!