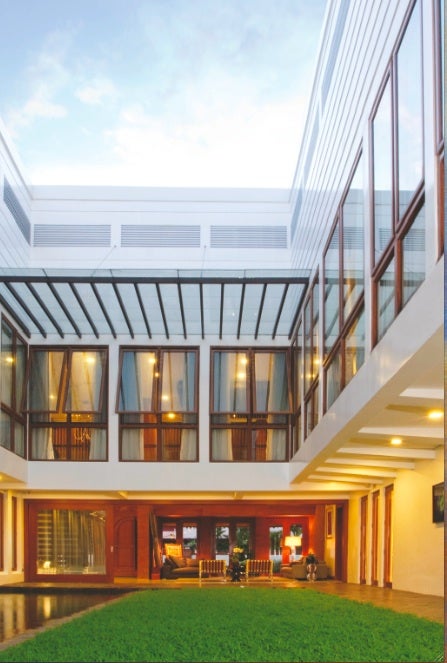 For nearly a year this businessman had been looking for a house he could transform into his home. After seeing a two-story, four-bedroom affair the design of which had been inspired by the bahay kubo (nipa hut) in a gated village in Metro Manila, he knew his search was over.

Built in the early ‘70s and originally designed by architect Ed Ledesma, the house, with its tiered, sloping roof, looks nondescript from the outside. It becomes a different story, however, once you enter its massive and tall front door.

Made primarily of stained hardwood and tiered bricks, the house, says the young businessman, is a work of art. From the moment he stood at the door, his mind began racing with possibilities.

He wasn’t disappointed with the design and structural flourishes that awaited him inside: high living room ceiling, dramatic staircase, ample walls to hang his art collection, and a courtyard with a Japanese-style garden built around a pond.

“I was immediately awed by the door,” he recalls. “It was like stepping inside a church. I didn’t mind that the dated interiors look a bit too dark and heavy for my taste. They don’t build houses like this anymore. It was really a labor of love.”

Indeed, it took its former owners – a homemaker and her late husband, a doctor – nearly a decade to complete the project.

On hindsight, it was as if the house and the young businessman seemed destined for each other.

“I learned that a good number of people were interested in buying the property,” he says. “But they all wanted to tear the house down and build another in its place. The owner, then newly widowed, would hear none of it.”

For sentimental reasons, she wanted the house’s future owner to retain its structure. Save for a few revisions meant to meet his needs, the businessman was more than willing to abide by the widow’s terms.

After closing the deal, he hired architect Dan Lichauco and interior designer Roan Espino to achieve his vision.  Espino had worked on the businessman’s old home, and was already familiar with his preferences. “He’s partial to modern, contemporary interiors, but also appreciates unique touches that make for interesting living spaces,” says Espino.

The businessman’s old house, which he has decided to keep, was modern and minimalist, and worked for him back then. But now that he’s a father to a growing girl, he wanted a homier place that exudes more warmth.

Espino opted for relatively low furniture, such as sofas and accent chairs from Italian high-end brand Minotti. His reason? He wanted to emphasize the ceiling’s height.

“Would you believe it took us almost two years to finish the work?” says the businessman. “As we addressed one area, we uncovered more that needed to be addressed. I don’t even want to sum up my expenses. The important thing is I’m happy with the results.”

Lichauco knocked down a few walls and expanded the two bedrooms. Espino  transformed the dark, woody interiors into what he describes as traditional modern.

Most of the brick walls, save for certain portions of the living room, had to give way to white walls that would be an ideal backdrop for the businessman’s collection of paintings by H.R. Ocampo, Gus Albor, Romulo Olazo, Bencab, and Manuel Garibay.

“I started collecting artworks some years ago,” he says. “I used to go for more figurative works, but lately I’ve been more drawn to abstracts. Gus Albor happens to be one of my favorites.”

The businessman also has a few works by Malang, Romulo Galicano, Joya, and  Ang Kiukok displayed in various parts of the house, including the den, the formal dining room with its long, 12-seat narra table, office, and stairwell walls.

Espino had some of the old wood that made up the eaves, ceilings, and beams stripped of their dark stain. He also had some of the brownish hardwood that make up the exteriors surrounding the courtyard removed to make room for white walls interspersed with a series of long, vertical windows. “The bedrooms have been virtually opened up,” says the businessman.

He makes it sound so easy, but those vertical windows, also found on first-floor walls that face the courtyard, were a cause of delay. “He wanted longer windows on the second floor,” Espino explains. “But doing so would mean hitting a structural beam. Since he wouldn’t have it any other way, we had to raise the beam several inches to accommodate his wish.”

Screened windows with wooden grills that make up the house’s façade also had to go in favor of several French windows, as did huge balusters that line the cantilevered staircase. Instead, Espino went for a series of tempered glass as guardrails. He had to reduce the size of the handrails to create the staircase’s floating look.

Even the ceiling, made primarily of dark planks, was replaced with plain white plywood.  Painter and landscape artist Dolts Pilar was commissioned to redo the garden. Pilar opted for a series of Oriental-inspired pocket gardens with smooth river rocks and bamboo hedges.

But it was the courtyard that underwent a drastic transformation. Gone were the pond and lush Japanese garden, and in their place is an open space that now accommodates, among others, a lapping pool and a long patch of carabao grass.

“We had the space originally planted to blue grass, but it didn’t survive because there isn’t enough sun,” says the businessman. “We switched to carabao grass, and, except for certain sections, we seem to be succeeding.”

Although he seems to have enough resources to build his dream house from the ground up, the businessman had been putting it off for the longest time. He figures that buying an existing house and refurbishing it is easier.

“That’s why I didn’t want to buy just a lot,” he says. “I always thought that it was less complicated to have an existing structure refurbished. I really felt I wasn’t ready yet to build my dream house.”

He now has enough time and experience to prepare before embarking on one of the biggest projects of his life. But something happened while he and Espino were working on this latest project.

“The moment you embark on building your dream house, you have to have a clear idea of what you want,” says the businessman. “When we were doing this house, I eventually fell in love with it. It was so unexpected. I told Roan that I’ve finally found it in this house, and this is where I intend to stay and grow old.”