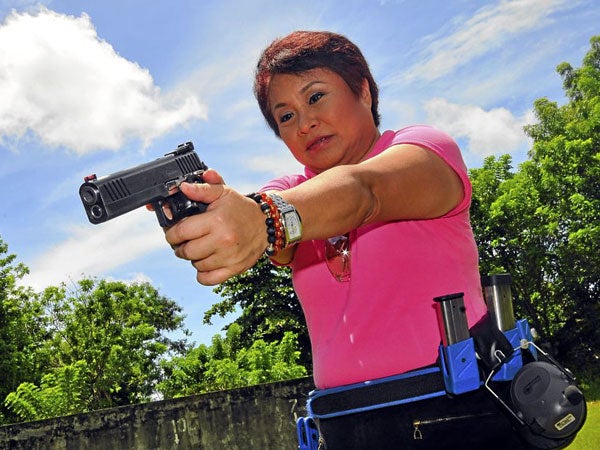 FOCUSED: You have to make them pay taxes (Inquirer Photo/Andrew Tadalan)

The tax ma’am cometh—and she’s gunning for you

Kim Henares draws her .40 caliber STI pistol and fires one round into each target some 20 feet away.

Unlike the male members of her shooting entourage who fire in rapid succession, Henares’ style is a more measured and deliberate “pop… pop… pop…” pace, as she makes sure that her pistol is settled on each target before she squeezes off a round.

She doesn’t use the so-called “double tap” firing method preferred by military types.  The method, which involves two rounds fired in rapid succession at the target (preferably on the head), ensures that the enemy is undeniably and irreversibly dead.

But the result of Henares’ more laid-back shooting style is just as lethal: one bullet hole in the “center mass” of the spray-painted targets shaped as human cutouts.

Six dead “bad guys” and about six seconds later, the Internal Revenue commissioner puts the safety lock on her pistol and returns it to its holster.

IT IS often said, of course, that “shooting is the new golf” under the administration of President Benigno Aquino III, since the Chief Executive is an avid shooting enthusiast.

But for the tax chief, getting into the sport has a more practical purpose than just being good with the Boss.

“When I became BIR commissioner, the President assigned [Presidential Security Group] men to me,” Henares recalled. “They had guns, of course, but I thought I should also learn how to shoot. Just in case something happens to us, I would not be a liability to them. At least, I could help.”

Two years into her job as the head of the government’s tax collection agency, and Henares’ ability to help her bodyguards has leveled up to encompass several pistol types and calibers, and a few assault rifles as well.

“I do this every weekend now,” she said, explaining her growing proficiency with guns.

That Henares needs to periodically relieve herself of the pressures of the job is understandable.

As head of the BIR, her mandate is to collect as much taxes as she can from both business executives and citizens alike who, over the years and based on experience with previous administrations, have become jaded, skeptical and hostile about turning over their hard-earned money to the government.

“No one wants to pay more taxes,” is Henares’ standard reply when asked about the psyche of the Filipino taxpayer. “So you have to make them.”

The BIR is tasked with collecting some P1.06 trillion in tax levies this year.

It is a tall order for Henares, but she has been making incremental progress since she was put at the helm of the agency responsible for collecting 70 percent of the government’s total revenues in any given year.

Last June-for the first time in recent memory-the BIR exceeded its monthly collection goal. Whatever Henares is doing is apparently paying off.

Collecting taxes was, however, the farthest thing from the mind of the young Kim Jacinto during her early schooldays at the Immaculate Conception Academy, and then the Grace Christian High School.

Despite the strong influence of her Chinese-Filipino parents, Henares recalled that she “did not become a very good student” until her fourth grade.

Back then, she wanted to become a doctor.

“My first love was medicine,” Henares said. “But my mom—we’re from a conservative Chinese family—said it wasn’t practical for a girl to be studying medicine. My mom said, ‘If you finish pre-med and you don’t go to medicine, sayang yung pre-med mo [it would be a waste]. And assuming you go into medicine, what happens if you marry someone who doesn’t want you to practice? It’s a waste of money.’”

So the young Kim enrolled at the University of the Philippines in the mid-1970s, and took up civil engineering.

But she never got the chance to love the place or her course, she said, explaining that her love for studying came into direct conflict with the attempts of the militant student movement at that time to “indoctrinate” her.

After one semester, she left UP and moved to the College of the Holy Spirit where she took her first tentative step on the path that would lead her to her present job.

She recounted: “Before you could major in any course, you had to take qualifying exams. And I topped the exams for economics and accounting.” 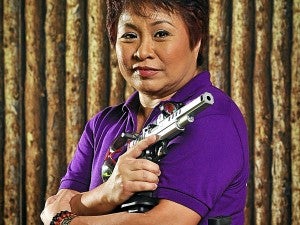 Amid aggressive lobbying by teachers from both programs for her to choose one of these two courses, Henares suggested to the school that she be allowed to take both economics and accounting simultaneously. After getting approval from the education department, the college did.

Hungry for more knowledge in accounting (and having finished all her economics subjects), Henares then moved to De La Salle University where she finally graduated college.

“It’s actually a boring subject, but the logical side of me told me to take accounting,” she explained.

Even then, the young Kim was not through studying.

Debating was something she had loved since high school so she went on to study law at the Ateneo de Manila Law School.

“I took the entrance exams for Ateneo and UP,” she recalled. She was accepted at both universities but decided to enroll at Ateneo, “since I already had some experience in UP.”

She mused about her rather lengthy college education: “If I had insisted on medicine, I wouldn’t be here now.”

It was during law school at the Ateneo when Kim Jacinto met future husband, Daniel “Danby” Henares. She would eventually find out that their paths had crossed previously when they graduated in the same La Salle ceremony in October 1980.

“But we never met in La Salle, only at Ateneo. The first time I met him, I think I even snubbed him.”

She recounted how her she and some friends had planned an outing and were waiting for another friend to finish her exam. “[Danby] passed by and said, ‘O, I heard you’re going to this place.’ I answered, ‘Yes.’ ”  Her answers were monosyllabic, “only yes, no, yes, no,” she recalled with a chuckle. “I’m an introvert by nature. My extroverted side came from my husband.”

Soon after, the two began taking subjects together. Danby would always sit on the front row and would often turn around to chat with Kim and her friends. “And that’s how we became friends,” she said. “Soon after, we became the best of friends.”

The romance, however, developed only about a decade after college.

The extroverted Danby—himself a national shooting champion—and the introverted Kim have been married for 11 years since. They have no children.

Fast forward to 2009: Henares found herself helping then Senator Manuel “Mar” Roxas II in his bid to become president. Things didn’t pan out for Roxas, and many of his supporters later shifted loyalty to the opposition’s new standard bearer, Sen. Benigno Aquino III. 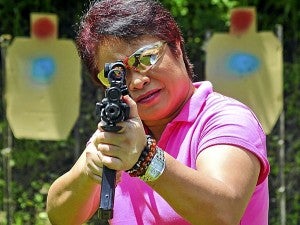 Henares soon found herself a member of the group tasked with giving the future president advice on economic policy.

Well after all, she has extensive experience in the economic field, owing to her stints in the banking sector, as BIR deputy commissioner (until the Hyatt 10 incident in 2005 when several Cabinet officials of former President Arroyo resigned in the wake of the “Hello Garci” electoral fraud), and her involvement with the International Finance Corp. unit of the World Bank.

“While we were on the campaign trail, [Aquino] asked me that in case he gets lucky and becomes the president, would it be OK with me to help him? I said, sure, in whatever way I can,” she recalled.

As fate would have it, Aquino won and Henares was asked to head the perennially underperforming BIR.

Met with initial skepticism from within the bureau-and by some business leaders wary of her reputation for being “unyielding”—Henares has since muted her critics with her performance that seems to improve with each passing month.

Since receiving her marching orders from the President to file charges against tax cheats every other week, Henares has filed a total of 115 complaints against businesses and individuals found to have cheated on their taxes.

That no one has yet been sent to jail does not bother her, she said, since both the BIR and the judicial system are experiencing a learning curve.  The two agencies are unaccustomed to charging tax evaders, she added.

“Compared to (how things were), [the tax complaints are] moving a lot faster now,” Henares said.

Given that she is well on her way to meeting the BIR’s revenue collection targets, what more does this chief tax collector want to achieve?

For a start, she wants to leave behind a more professional BIR devoid of its old reputation of being a haven for corrupt officials, she said.

“For the most part, the BIR people are good people. They are professionals,” Henares said. “It’s just a few rotten apples that spoil the picture.”

She added, however, that even these so-called rotten apples have curtailed their activities, of late. “I’ve always said that the [corrupt] people at the BIR are smart. If they see that they can’t get away with it, they won’t do it.”

One of Henares’ goals-to make the BIR bureaucracy adhere closer to rigid moral values-echoes the campaign promise of her Chief Executive.

As part of this reform, the BIR now implements an integrity exam for all applicants that includes an aptitude test and a psychological exam to measure a candidate’s ability to work in the bureau (and presumably withstand the temptation associated with handling billions of pesos worth of tax payments).

“The funny thing is that most people pass the aptitude test, but flunk the psychological exam,” she said. “And these are new people who want to come in, ha?”

Her other answer reveals an aspect of her character that probably explains why some people are afraid of her, and hints at Henares’ desire to achieve more—whether in the private sector or in public service, she won’t say.

“I want to implement more reforms at the BIR, and bring it to that point that [the reforms] become unstoppable,” she said. “If this happens, whoever comes after me at the BIR wouldn’t be able to stop the changes from happening.”

Henares added: “If you give people good service, they will clamor for it even when you’re gone. It won’t matter who comes after you.”

With the sun climbing higher in the sky, it was soon time for Henares—ever the diligent student—to learn her next lesson in target shooting: firing from a prone position.

She dons her knee and elbow pads and walks over to the firing range, loads and cocks her pistol and, at her instructor’s command, draws her firearm and drops to the ground, rolling her body slightly from right to left as she puts some rounds into the human figure cutouts.

The firing pace is steady and deliberate. “Pop… pop… pop…”