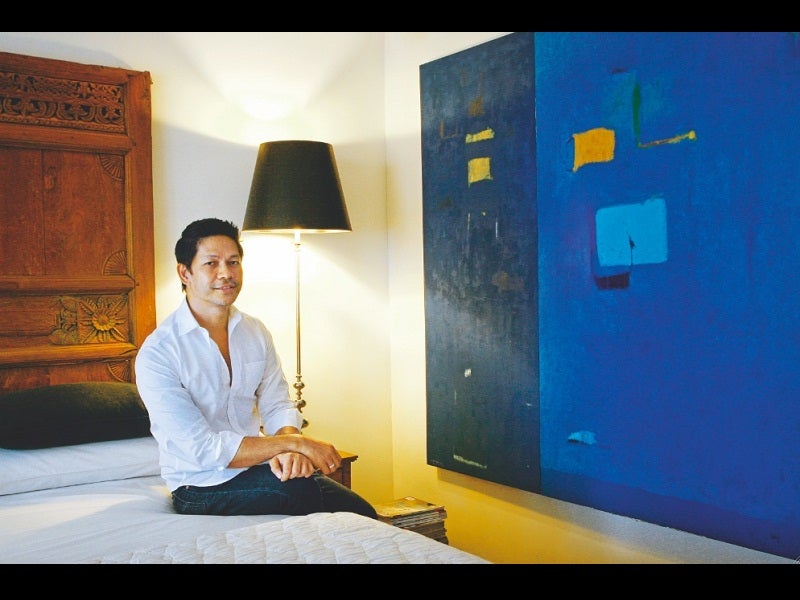 At first look, the condo unit of design consultant/entrepreneur Margarito “Ito” Kish is the exemplary single man’s pad – contemporary, sleek, and obviously tidied up by a help. It has custom-made furniture, piped-in music, and art.

Beyond function and purpose, however, it could be mistaken for an extension of his showroom, Kish. Furniture is clustered like exhibition pieces and many elements come from his shop which hadn’t been purchased by customers.

When Kish acquired the 148-square meter Makati condo, he gave it a facelift. It was stripped of the floral wallpaper and parquet flooring. Sunken walls and niches were straightened out or transformed into hidden cabinets. The walls were whitewashed and the flooring painted in high gloss.

The black-and-white shell served as perfect canvas for his furniture. Instead of flat walls, rectangular wainscoting was added throughout the living room for visual movement. A floating divider hides the open living room and dining room from view. “I don’t like to show everything as soon as the visitor enters. I want an element of surprise,” says Kish.

As it is, a mural by Florencio Concepcion in the foyer is enough to knock your socks off.

“I don’t have a specific look,” he says. He points out the combination of period pieces and textures.  A classic teakwood armoire and dining table are juxtaposed with mid-century Panton chairs, a modern Italian sofa and round-back accent chairs. His latest pride is the Geo Cocktail Table by Vito Selma, a gift from the mother of the Cebuano designer who’s winning awards and fame abroad. Its signature String Art design – Selma’s way with wood made to look like strings, shaped like DNA strands – is a counterpoint to the simple lines of Kish’s other furniture. The organic-shaped Spanish chandelier made of metal strips and suede provides another point of contrast.

Kish is proud of acquisitions from his own store – a pair of round convex mirrors symmetrically hung on the walls and the pumpkin and big glass candleholders, juxtaposed with a metal mask and wooden tray from Bali on the coffee table. A row of sleek artificial candles from his shop on the dining table goes well with the roughness of a twisted wooden vine.

These objects aren’t just decorative. They marked milestones in his life: twin side tables purchased in 1989 when he started his career at Robinsons; Indonesian furniture and gewgaws acquired during his stint with the Matahari chain; Portuguese ceramic plates from his old Greenbelt 3 store, now closed (“Customers didn’t get it”).

His rule on decorating: follow what you like. On tablescapes, he emphasizes the importance of proportion, leaving ample space so that guests can park their drinks.

“Decorating is personal,” says Kish. “I always have a high point and a low element.” He points to the arrangement on the console, consisting of tall white orchid against a small wooden betelnut box; a 19th-century ceramic carved white vase shaped like a gourd set beside the low, century-old dulang from Ubud, which holds fake moss from the store.

Although the kitchen is spare, it continues the black and white theme – white artificial stone surfaces and black flooring with the backsplash painted in old rose. To obscure the clutter of plates and pitches, the cabinets were covered with frosted glass.

In his bedroom, Kish breaks the rule about bringing big pieces into a condo. From Indonesia, he brought an oversized Balinese bedframe and an outsize bed bigger than king size. “My room looks like a resort. It’s all wood and whites,” he says. The only pop of color is a blue mural by Le Franco. A black stone Buddha from Bali and chrome lamps are the only sparse adornments. “I have four sets of lamps I just move around the house,” he says.

Kish points out that since his unit is in an old building, the walls tend to warp. Wallpaper camouflages the flaws in his walk-in closet. The real surprise is that his clothes are arranged as if in a store display.

“Every time visitors enter the walk-in closet, they don’t believe I have a limited amount of clothes and shoes. When I buy a new pair of shoes, one pair must go. No space. Only my Havaianas are stacked.”

A visual merchandiser, he taught his helper to use a folding board so that his shirts are uniformly stacked. The rule, he says, is to keep two inches of space around the perimeter of the shelf or cabinet and two inches of space between the stacks of clothes. The clothes are color-blocked from light to dark, short sleeves to long sleeves, with and without collar. The suits are neatly covered.

The drawers also classify the socks, from sports socks to black formals, and undergarments from white to printed.  Even the shoe rack has its story, from casuals to formals, light to dark. Kish says you can make your own folding board by making it proportional to the size of the shelf or drawer.

Another tip is that, for big materials like bed sheets and curtains, use the portable steam iron.

“Maintenance is top priority. When you live alone, declutter. Even if you have beautiful pieces, things can look messy if you don’t organize.  Keep things you don’t need. I have storage in the dirty kitchen where I keep everything. All the rooms have hidden storage,” he says.

Clearly, Kish’s residence is a place to retreat from negotiations and sales. As a typical singleton’s pad, it’s designed as nesting place for oneself rather than for sharing in a relationship – although a guest room is on hand.

“I’d rather call it an apartment, because it’s got an Old World charm to it.”