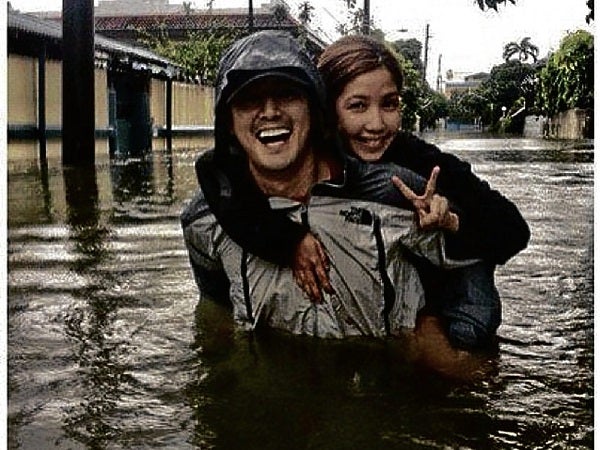 Model, athlete, TV host Marc Nelson had a flight to catch last Tuesday. But the flood made it impossible for him to reach the airport so he stayed put.

While having lunch at a neighbor’s house, he learned that his friend Alex was trapped with her 5-year-old daughter in her Sta. Mesa home. “She’s one of my barkada, a very dear friend. It was a no-brainer.”

Soon, Marc, OJ Tiongco and Victor Consunji were on their way to rescue their friend. “The great thing about having friends as close as ours, we know that any one of us would drop anything to help the others if needed,” he said.

It took them over two hours to find a route to Alex’s house. “We tried about five different bridges from different routes but had to look for new routes multiple times because floodwaters were too high. Vic was driving and I was navigating via the Google Maps app on the iPhone.”

Marc also used Twitter to ask people for information on flooded streets. “The responses were a great help as we probably saved time by avoiding certain areas.”

They got as close as they could to Alex’s house. “We left OJ to be our communications post in the car. The cell signal wasn’t strong and there was no 3G at Alex’s house.”

Marc and Victor walked until they reached the flooded area. He said, “Then it was just a matter of wading in. I’d made sure I was wearing appropriate wet gear. I’m comfortable in the water and not squeamish so it wasn’t really an issue.”

When they reached the house, Marc and Victor saw that the front gate was flooded. “I had to jump it, then we had to negotiate our way down the side of the house past the underwater obstacle course of drowned furniture till we got to them on the second floor at the back.”

Marc realized he had to carry Alex. “The flood was deepest around their house, about up to my chest, so whilst Vic carried Alex’s 5-year-old daughter, I carried Alex as the water would have been over her head.”

A photo of Marc Nelson carrying Alex on his back has gone viral. When asked if he had expected the attention, he said, “Haha, not at all! I was posting the pic so that everyone who had helped would know that we had gotten through. So once again to those Twitter followers who helped not just me but everyone else during this crisis, thank you.”

Marc still thinks what they did wasn’t a big deal. “My effort, together with Vic and OJ is minor compared to what a lot of people have done to help. Some of my friends like Rovilson Fernandez and his cross fit buddies put in a whole day of packing relief goods. Other friends have organized donation centers or gone shopping for things they can give to help. The rescue crews we see on the news are doing an amazing job and deserve all the thanks and praise we can give them, as do the government, private and NGO groups that have organized rescue and relief centers.”

Marc didn’t stop at rescuing Alex and her daughter. Armed with his makeshift rescue kit, he headed to the village next to his to see how he could help the people there. He also delivered relief goods to Enderun, where volunteers were cooking relief food.

Marc has advice for other people who want to help out. “Be careful, and unless it’s a life or death situation, don’t put your own safety at risk. I’m reasonably fit, a strong swimmer and a rescue-certified diver since I was a kid, but I know my limits. Also make sure you are prepared with a rescue kit. We brought ropes, harness, towels, water, food, dive flashlight and a fully charged phone in a waterproof case. I had a wetsuit and fins with me just in case the situation called for it, but thankfully it didn’t. If you’re not sure you can handle the situation, contact someone who can. Note that with some string or rope, you can construct makeshift flotation rafts or even life vests out of things like empty plastic bottles. Also, follow my friend @hailtotheking for excellent advice on how to drive through floodwater if you absolutely have to.”