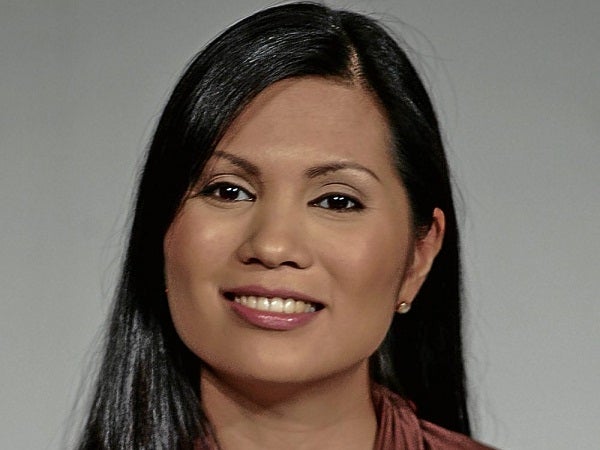 Patricia “Shaan” Bermudez-Hizon was very involved in the relief efforts during Ondoy in 2009.

This time, when the flooding started, Shaan jumped to action again. “I knew I didn’t want to just take a back seat. I wanted to help those in need and also help the ones who wanted to help.”

Shaan, who impressively juggles her responsibilities as wife, mom of two, sportscaster, events host, TV host, founder of Everyday Is Your Birthday Foundation and the head of Advocacy and Marketing for Maynilad, turned to Twitter to spread the word.

“I sent out tweets and people were quick to respond. While I was going around picking up hot meals, I had my helpers cook whatever we had.”

First, she delivered food to a nearby village. Then she bought more food to be cooked.

Shaan wanted to find a way to get the food across to Tumana, Marikina, where the waters were chest-deep.

Their village guard called in the village rescue team and Shaan accompanied them during the delivery to Tumana. “There were also teams from MMDA and DPWH there rescuing people. We took a boat to get to the foot of the bridge and checked on people if they wanted food or better shelter.”

Although she was drenched and freezing, Shaan wasn’t fazed. “I had a home and dry clothes to change into. The flood victims had to endure that for hours, for days. They had very little options, no warm shower waiting, no comfortable dry clothes.”

She convinced families to evacuate. “There were jeeps with entire clans who didn’t want to leave. One had eight people inside including three kids and one very sick woman.  Eventually, we were able to convince the sick woman to be carried out with a stretcher. Her fever was so high she could not walk. She was sent straight to the clinic and was reunited with her husband in the evacuation center in our village.”

Shaan was just getting started. “I went back home and prepared more hot meals. By then, the Tumana operations were done. I looked for the nearest evacuation center, and ended up in Barangay Libis where almost 200 families were crammed in the basketball court with their pet dogs and chickens.”

Once again, she was doing what she did during Ondoy—filling the gap in relief efforts.

“I’m not using my home for relief ops center anymore. So many are doing that so I’m focusing my efforts on delivery and coordination. I source vehicles, set up drop-off areas, coordinate with evacuation centers and also do deliveries and distribution. ”

“I’ve been in touch with a lot of the same people and everyone’s doing what they can to gather donations and get info out.  Whatever donations we gather, we send out to an evacuation center or barangay in need.”

And because of her work with Maynilad, she’s also been helping send water to areas that need it.

Shaan has a lot of memories from these past days. There was the woman she met in the evacuation center in Payatas. “Her baby had hydrocephalous.  He looked like an 8-month-old but he was almost 3 years old. I loved how she managed to still be friendly and smile. She lost her belongings, she was living in a crowded evac center, her child has been sick since birth and yet she was optimistic. I love that.”

When asked if she has tips for other people who want to help, she said, “Don’t be as crazy as me—my husband thinks I’m crazy. Think of your own safety first. Try to help the areas near you. Charity begins at home so ask your household help too if their families need help. Volunteer, but again, pick centers and orgs the ones that are closest to your homes.”

She added, “Ondoy really showed me how wonderful we are as a people. Here’s another great opportunity to show what we’re made. Let your light shine!  Never tire of reaching out, going out of your way, showing concern to those in need.  Keeps sharing, keep serving! All for God’s glory!”

Shaan said, “I’m not doing anything extraordinary.  I’m just doing what is right.”