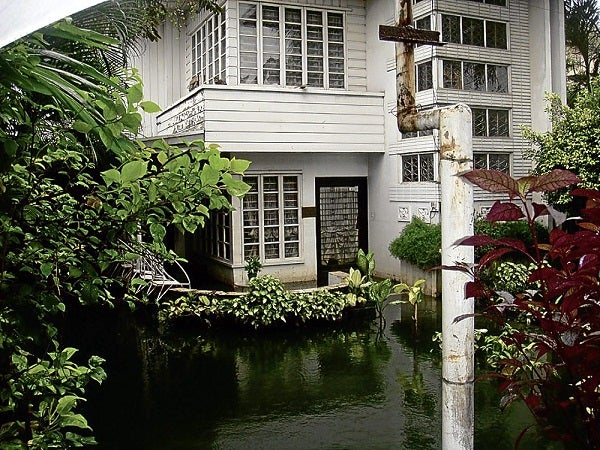 The Obando and Malabon of my childhood leave me depressed

Instead I dwell on my two hometowns, Malabon and Obando, which, just when you thought couldn’t get any more flooded than they have been all year round, really became a sea of calamity this week.

I dread visiting Malabon and Obando. The rare times I do, usually during Christmas and must-attend family visits, I get depressed, just like Inquirer columnist Neal Cruz, who’s also from Malabon.

The landscape is so pathetic that you strain to remember its idyllic and prosperous past. (Given the proliferation of factories, perhaps it does remain prosperous—for the factory owners and politicians.)

Last Sunday, before the deluge, we were in Malabon to attend the burial of my cousin Babit Sioson Ignacio in a memorial park in the outskirts of Malabon. While the downpour was intermittent, I was actually pleasantly surprised that the memorial park wasn’t flooded at all, not that Sunday before the calamitous week. And for that, I thanked my aunt Adelina Sioson who, shortly before she died in the ’90s, had the foresight and managerial ability to move the family’s resting place, with the remains of my grandparents, from Tugatog to this memorial park.

My grandfather’s burial plot in Tugatog, which is between Caloocan and Malabon, was a source of happy childhood memories. Since it was vast and grand, we looked forward to visiting it on All Saints’ Day simply because we could romp and play in it. My paternal grandfather, Nicomedes Sioson, must have made sure that it befitted his stature as elder councilman and businessman of the town—and that his grandchildren would have a good playground in it.

On that score, he was right—we’d come home from the cemetery exhausted and bruised but happy. My younger brother owes the scar on his chin to one such cemetery romp—a cousin raised the metal chain that surrounded the tomb like a sculptured rope just when my brother ran toward it. He tripped, fell on his face and suffered a deep cut. I remember how he cried and wailed as they sewed the cut; I realized then that All Saints’ Day had a way of separating the big bullies from the small bullies.

Then last week, the Tugatog I read about in the news was so different from that of my childhood. Today it is just ghastly. The “apartment” niches—congested, for sure—collapsed amid the onrushing floods and disgorged fresh corpses.

My dear departed aunt made the right move in moving the ancestral remains to this memorial park. But then her foresight didn’t consider that the park would one day be hemmed in by a colony of informal settlers. Its perimeter walls are lined with shanties sardined along the waterway.

The Malabon I come home to has been overrun with informal settlers and factories. It’s a ghetto of concrete buildings with mountain-high gates and toothpick-like slum structures. One is hard put to find the old residential structures amid the shophouses and factories. Whenever I drive to Malabon I sometimes miss my turns because the old familiar landmarks are gone. The towering acacia trees in our old Acacia neighborhood (no doubt, named after the trees) are gone.

And—there’s trash everywhere.  It’s as if when Malabon is not under water, it is, just the same, a sea—of garbage.

I once asked Rep. Toby Tiangco, himself a Marcelo from Malabon, why the local governments have allowed Malabon to rot. He said, “Not Navotas. It’s clean and we’ve beautified it.”

Obando, where my mother’s family is from, is another sad story.

In my childhood, Obando, to me, represented the rule of the matriarch and the church. My mother’s family was ruled by martinet grandmothers and spinster grandaunts who ran both the fishponds and the parish priests—who, in turn, ran the church and the school. (My Malabon aunts, who are Aglipayans, referred to my Obando aunts as “romanos” —as in Roman Catholic Church!) The parish priests and my grandaunts made such a grand holy alliance that could attempt to run your lifestyle, if not your future.

My young summers would have picnics in the fishponds—another must-attend. There would be a procession of bancas with outriggers on the clean river to a resthouse on the fishpond where a feast of fresh prawns, crabs, alimango and oysters awaited. Although we would have rather been daydreaming of our crushes (the Monkees, if you must know), we nonetheless enjoyed the food and the fresh breeze, and tolerated the company of adults (and priests). We feigned summer fun; at least I did.

Lives centered on grand fiestas and even grander Holy Week processions, where your family’s stature was gauged by the grandiosity of the carroza. I remember the smell of incense as the last carroza at the end of procession passed by. To me, the winner, hands down, was not our Pieta (although the voluminous white muslin cloth that draped the cross was simply elegant, matching the white calla lilies), but the statuesque Mater Dolorosa with an exquisitely beautiful, mournful face. (But I kept that choice to myself.)

When I was already with the newspaper, I dragged my friend, then Daily Express photographer Jun de Leon, to cover a Good Friday procession. He did diligently—perched atop the Daily Express vehicle for a good many hours.

I haven’t been back to any Good Friday procession in Obando. I don’t know if today it could be a venue conducive even to solemnity, never mind grandiosity. High tide or low tide—it really hardly matters—my lola’s front yard is under water, murky water that has already bred small-time marine life. That front yard used to be a very beautiful garden seen from a wraparound terrace from where my spinster grandaunts ran the universe—theirs, and that of their indirect descendants.

Thanks to a divine hand, my last remaining spinster lola turned senile before she was moved out of their ancestral home, which is now uninhabitable. In this case, senility became such a sweet blessing against the ravages wrought by man.

Like most of Mega Manila, Malabon and Obando have been a calamity waiting to happen, and not solely because of nature or climate change. Its local governments can’t blame forever Imelda Marcos’ construction of the nearby Dagat-Dagatan, either.

One doesn’t have to be an urban planner to know that these two coastal towns, like many parts of Metro Manila, have suffered from a surfeit of informal settlers, no zoning, no waste management, undeterred construction on waterways—the ills resulting from years of the local government’s neglect and abuse now sound like a broken record.  Like the rest of Metro Manila, there’s no urban planning to speak of.

In the meantime, the faces of local politicians under whose watch the environment deteriorated in the first place are plastered all over these coastal towns. Now these fief lords will even have at their disposal the funds the national government is releasing for dike construction.

You hope that this calamity results in, at the very least, greater awareness of people that come election time, their politicians’ genuine commitment to the environment is a make-or-break issue. The environment comes first—before the politician’s wife’s four-carat diamond stud.