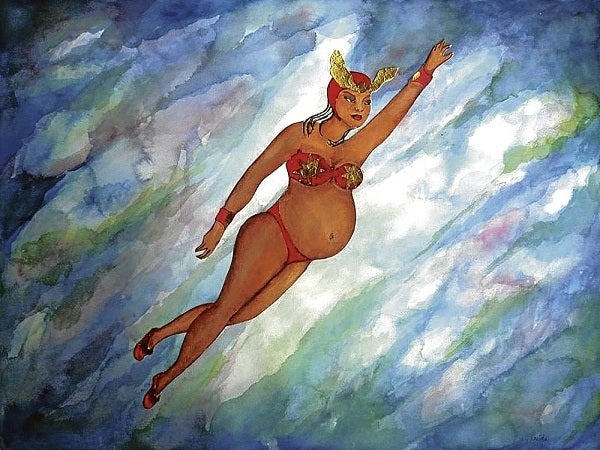 The first antique Filipiniana dictionary I ever owned (“Vocabulario de la Lengua Tagala” by Pedro de Sanlucar, 1754) came from Ambeth Ocampo. Way back in the early ’80s, he was already collecting a lot of old Filipino books—I mean by “old” that most of them were still in Spanish—that I then wondered what their use ever was going to be.  (You’d need a Spanish dictionary beside you all the time.)

But when I saw Ambeth’s library building up and the wealth of raw material to be mined, I really got envious. Old Filipiniana then was still cheap and expendable, so he had a number of duplicates. The priceless dictionary was one of them.

Soon, I got hooked, too (but actually I was more hooked on art than musty old books). There was a small old bookshop called Libreria Martinez at the rotunda of Quezon City near the now Welcome sign. It was closing shop and bargaining off their titles.

What attracted me initially were the small hardcover books in Spanish (on popular subjects) in circulation in the early 1900s. They had stunning illustrations on their covers. Many of them, though, had no connection to their contents. “Industrias Lucrativas,” for instance, had this beautiful woman surrounded by flowers when it was a no-nonsense instruction book on alfarera, which was the art of making wooden frames for windows and doors!

A better fit was a book for lovers, “El Libro de los Enamorados.” It showed a handsome young man, feather quill in hand, in front of a desk on which reclined a smiling cupid.  Its chapters included “Medicinas para la Hermosura” (beauty enhancers); the meaning of flowers; what the handkerchief, panuelo and fan can say; advice on writing a love letter. The books were not collectible material and must have been Ocampo’s rejects. They made me happy. They cost P15 to P20 each and I bought them all.

A lot more useful for research were the readers contained in a trunk.  The “Insular Primer” of 1904 had one memorable illustration, a photo of a five-year-old Filipino child, dressed in a saya, holding one Filipino and one American flag.

Under the Filipino skin

The Americans sure went to a lot of trouble colonizing us with education denied by the Spaniards. They tried their best to get under the Filipino skin, more than Filipinos of subsequent eras did for their own countrymen. Some stories were brilliant, though a few were so off-the-mark as to be funny. For instance, the god of the Mayon Volcano who smoked big cigars and accounted for the smoke belching of its crater was called “Harisaboqued,” Hari sa Bukid—get it?

In the exclusive convent school that I went to in the 1930s, our readers had blonde children, snow, squirrels and elm trees. I never realized I was Filipino. But then one day, I wandered into the entresuelo where lived my friends, children of a driver. They showed me their Camilo Osias public school reader. The first illustration I saw was of a little boy on tall stilts and a little girl with her feet on two halves of a coconut shell. Her toes were griping the strings attached to them which led to her hands. I did not recognize the rural toys but the image instantly connected.  It was, after all, Filipino!

The drawings, I eventually learned, were by Fernando Amorsolo. My poor friends had a much more beautiful book in their school than I did in my exclusive school. That was my earliest memory of how beautiful something Filipino could be and the seeds of a thought that perhaps one day I could make a beautiful native book of my own.

The early American period in the Philippines is a gold mine of Filipiniana readers, many of them written by Americans: “Baldwin Readers,” 1897; “Catholic National Readers,”1898; “Newsom First Reader,” 1904; “Rizal Readers,” 1918; “Intermediate Pepe and Pilar” (illustrated by Carlos “Botong” Francisco), 1948. All these were available at the bankrupt Libreria Martinez for a pittance. A carved galleon trunk yielded a cache of the later edition Philippine Readers, including the treasured copy of the boy on stilts and the girl on coconut shells of my childhood.  Most of the more interesting lower grades were missing—evidence that Ambeth had been there!

Endless other interesting books on related topics surfaced—“Correct English,” 1924; “Character and Conduct,” 1932; “Health and Good Citizenship,” 1938; “Junior Citizen in the Commonwealth, 1937; Progressive Health Reader, 1939 (which includes “How to Wash Your Hands Properly”).  There were also the orange “Primary Philippine Geography” and the blue “Philippine Intermediate Geography.”  There was a copy of the rare “Pagsusulatan ni Urbana at Feliza,” a city cousin writing to her country cousin on how Filipino young women should comport themselves. (No wonder mothers of my era had a dose of all this oversolicitousness and pakipot!) I brought home as much as my driver and I could carry.