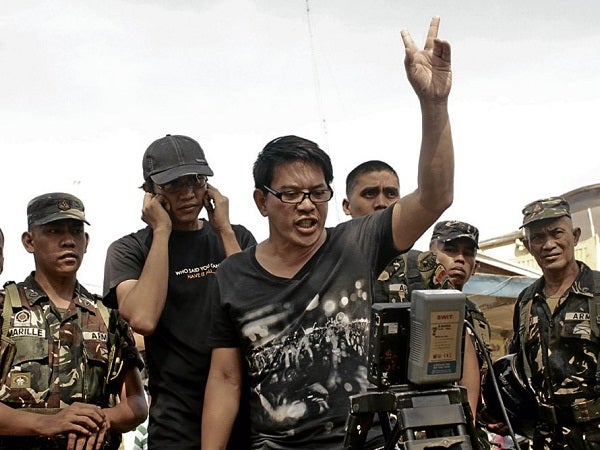 You will be captivated by “Captive.”

The film premiered at the 2012 Berlin International Film Festival earlier this year.

Although inspired by real events, parts of “Captive” are fictionalized. Brillante, who was given the Best Director award at Cannes for his film “Kinatay” in 2009, said, “These are characters and scenes that I felt were necessary for enhancement and dramatization elements.”

He didn’t allow the actors to leave the set. “Our actors normally do a lot of things at the same time—they would film, they have a TV show, they would leave the set and come back. Not this time. It was an immersion. In fact, before the shoot, I did not let the hostages and the hostage-takers meet. They only met on the first take of the first day. The hostages were brought to a resort where they won’t see the abductors. Everybody was surprised to see their coactors.”

Despite the difference in location and slight changes in the story, the experience felt real to the actors. Brillante made sure of that, shooting the scenes in chronological sequence. “I wanted the actors to feel the fear and the essence of kidnapping and being kidnapped.”

And it felt real to audiences, too.

“Captive” wasn’t easy to watch. And it shouldn’t be. That was the point. Brillante brings to cinema audiences the experience of being held hostage, of being snatched from their comfort zones, exposed to danger and dragged through thick jungles, away from the life they know.

For most of us, this is the closest we’ll come to being a captive. Luckily.

Post-screening at The Podium, still reeling from the experience, Super sat down with Brillante to talk about “Captive.”

The events in the film happened a decade ago. Why did you decide to make the film now?

Because it’s still relevant. A lot of kidnapping cases are still happening. In fact, as we were filming this, there were some kidnappings happening. Just recently I was in Mindanao to shoot “Thy Womb” and while we were there, meron na namang kidnapping in Tawi-Tawi where we were. I think it’s still relevant to show these kinds of stories to remind not just the government but all of us that there’s a problem, that there are issues that should be addressed.

How much research did you go into to make this film?

A lot. We read Gracia Burnham’s book which is like a personal diary of the Burnhams. We studied the government documents. There are a lot of things we needed to know. We had to put all the pieces together. These are important, all these small details. It’s also important for the actors to know what really happened between the hostages and the abductors. Like a while ago, someone asked if the story between the Chinese girl and the Abu Sayyaf member really happened and it really did. There was a hostage with Stockholm Syndrome.

Did you talk to all the people who were involved?

As much as we could. There are some people we had to protect, that’s why we had to change their names. But we stuck to the actual events that took place. The people who knew about this incident, those who followed this story, can easily pinpoint which characters are real and whose names had been changed.

You said that Gracia Burnham’s book was an inspiration for the film. Did you reach out to her?

I tried to reach out but she never replied. I think her story was bought by Paramount.

Did you talk to anyone from Abu Sayyaf?

Yes, yes we did. We had to go to Bicutan. It was actually really the guards who were trying to stop us. At one point they weren’t sure if they were going to tell us anything but when we started introducing ourselves and telling them our purpose, they became more open. In fact, marami kaming nalaman even beyond what we expected.

What was the most challenging thing about making this film?

How hard was it for the actors?

It was hard for them physically but to tell you honestly, they really enjoyed the shoot. For the first time, according to them, they felt like they were doing something that they can be proud of. They felt like it was a collaboration because I tried to involve them in the process of making the film. I gave them a lot of freedom in terms of character. Even before the preproduction, we would have talks from the survivors. They would share their experiences and the actors would cry because they could see the actual hostages’ experience when they were in captivity.

I was surprised by the actors you cast as the hostage-takers. How did you choose them? Tado was an unusual choice—but it worked.

I wanted to have a breather. Balance. I wanted to get somebody na parang comic relief. Because that’s what was happening. They were like that, they were funny. They were kids, most of them were kids.

So the survivors were saying they had light moments with the hostage-takers?

Yes. A lot of light moments, after 18 months of being together.

The film was heavy on nature shots. Why did you choose to include these elements in the film?

These are metaphors. When we showed the dolphins, you could see how free they were while the people were in captivity and couldn’t do anything. You could see the snake and how the hostages are prey and there are predators all over the jungle.

Did that make shooting harder for you?

Yes, you’re right. The hardest to shoot are kids and animals because you cannot direct them. You just wait. In fact, for the snake, we had to wait for more than half a day.

The birth scene was insane. Why did you decide to include that?

(Laughs) It’s a statement. It’s a statement of the film. Life and death and the children of war. That was in the script from the very start. Even Angel Aquino knew that she would do it.

Was she trained to assist in childbirth?

She was trained. Her sister was a nurse kasi. She did train. And we had to look for a pregnant woman wherever we would go.

How hard was it to find a woman who was willing to be filmed while giving birth? Was she paid?

It wasn’t hard. We told them what our intention was and why we were doing it. Of course, she was paid. And we paid all her hospital bills.

What do you want audiences to take away from the film?

I’d like them to see that everybody is a victim here. The hostages, the government, even the Abu Sayyaf themselves who are the kidnappers are a victim of their own cause. Everyone is a victim, at the end of the day.

The film opens on Sept. 5. Will it be shown all over the Philippines?

Yes. And the nice thing is we got an R13 rating so even high school students can watch it.

Your next film, “Thy Womb,” when is that coming out?

Before the end of the year. In November, I think Nov. 28.

Will you be working on another movie soon?

Yes. It will be a horror film with social issues with Dennis Trillo and Baron Geisler.