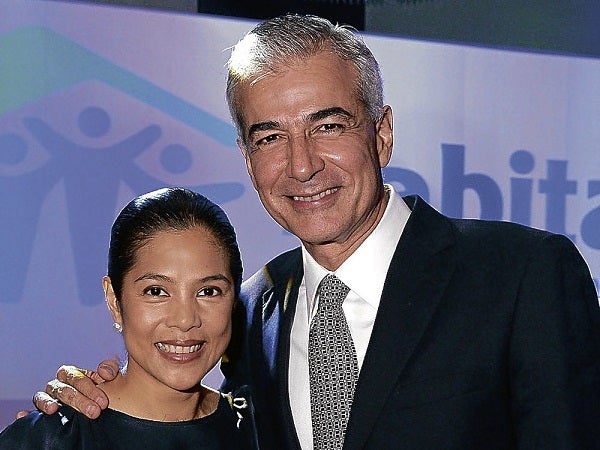 A night for building

It was a truly stellar night as government and business leaders and VIP guests came for the launch of Habitat for Humanity (HFH) Philippines’ “I Build My Philippines” coffee-table book held at the Peninsula Manila Hotel last week.

Vice President Jejomar Binay was the evening’s guest of honor and was the first to receive a copy of the book that commemorates the milestones and prime movers of Habitat’s four-year “I Build Campaign.” Also given citations were two of HFH’s largest donors and supporters: San Miguel and now Philippine Airlines CEO Ramon Ang and Social Welfare Secretary Corazon “Dinky” Soliman.

Rep. Manny Pacquiao (the People’s Champ) likewise gave a heartfelt, funny speech that made people laugh, especially when he spotted Vicki Belo and said, “Vicki, I love you with the love of the Lord!”

One of the event’s highlights was the production number of  Kuh Ledesma with Habitat ambassadors Kim Atienza, Chris Tiu, Matteo Guidicelli, Margie Moran Floirendo, Arnold Clavio, Kevin Yang, Alex Eduque and Derek Ramsay as participants. Habitat ambassador Karen Davila, the creative brain behind the book, shared some of the contents of “I Build My Philippines,” citing Habitat founder Millard Fuller and the late Philippine President Corazon Aquino as well as many others who were honored in the book.

I had one of the most unique experiences helping to plan this event alongside the hardworking and dynamic team of HFH, but with  a team of this caliber, how could you go wrong? Special thanks to this dynamic group led by Koleen Davila-Palaganas, Claire Agarme and Ana Herrera. Lending their expertise as well to make the event such a success were über-director Robby Carmona and his Saga team, the fantastic floral artist Robert Blancaflor, the best scriptwriter who happens to be an excellent singer as well, Garlic Garcia, and the Pen’s very own Stephanie Chong.

It was great working with all of you—until the next one! For book orders and inquiries on Habitat for Humanity, please contact Ana Herrera at 8462177

The culinary scene has been so interesting these past few months with the entry of several new key players. Of course, you have your staples, which happen to be my favorites as well: Sala, Sala Bistro, People’s Palace, Lusso, Kai, Inagiku, Abe, El Cirkulo and Massetto. But check out these new interesting places.

Over at Bonifacio Global City (BGC) Central High Street, there are standouts like Stella, Cue and Rocket Room. I also like the Cake Club for coffee and desserts, as well as Jamba Juice for a quick and healthy fix. Over in Rockwell, Apt 1B and Lulu are packing ’em in. My number one pick is Malou Fores’ Mamou, and soon to open is Gracepark, by the culinary genius Margarita Fores.

Back to BGC for the two new players that have given everyone else a run for their money:  Wildflour, a bakery/restaurant with an NYC meatpacking district design that fits so well with the BGC’s mega city look; and Las Flores, a Spanish restaurant with a hip cosmopolitan feel.

We have so many talented chefs and so many awesome restaurants, one just wonders what the Philippine culinary landscape is shaping up to be. Well, I heard that celebrity chefs (think: Wolfgang Puck, Todd English) are coming soon to spice up everyone’s taste buds and push our gustatory delights to an even higher level. Can’t wait!

I just came from Singapore, where I was again fascinated by the efforts of the government and the private sector to provide open public places for the people. They have especially focused on combining modern Singapore with Old Singapore, showing a great respect for their heritage.

I am hopeful that we can do the same thing in Manila. For example, there is public clamor on Facebook and Twitter to save Manila Bay from further land reclamation, in the area between the Yacht Club and the US Embassy. The petition “SOS Manila Bay—No to Reclamation, Save Manila Bay” says that a certain group has been granted 288 hectares of land in the area in question to be reclaimed.

Presenting its case, the petition states: “In addition to blocking the view of the sunset from Malate and Ermita, the reclamation will worsen floods, extinguish the tourism area along Roxas Boulevard, destroy the potential of our historic Intramuros, remove 20 vital anchorage berths for ships and, most of all, take away from us a waterfront we all love.”

Sunset on Manila Bay is a spectacular experience, and is free for all to enjoy. Let’s all work to enhance this great asset rather than destroy it. Make a stand and sign the petition by going to http://www.change.org/petitions/s-o-s-manila-bay-save-our-sunset-stop-the-reclamation-of-manila-bay. If you want to know more about the issue, go to https://www.facebook.com/savemanilabay.

I recently came across some good news in an article by the New York Times hailing the Philippines as “The Economic Bright Spot in Asia.” The article states that the “Philippines is the 44th largest economy in the world, according to HSBC. But if the current trends hold, it can leap to No. 16 by 2050.”

This got me thinking of the “endless possibilities.” By 2050, if the Philippines will have no poverty, be corruption-free, have no pollution and traffic, then this truly is a cause for excitement. But the harsh reality would be that I will probably be in my 80s, too old to truly enjoy life and worse, won’t be able to enjoy a bright Philippines with my loved ones.

But it doesn’t matter. At least there will be a generation of proud Filipinos who will not be ashamed of their citizenship, experiencing what it is like to be a first-world citizen.

We haven’t had this much optimism since the historic People Power revolt in 1986. It’s time to see our country as others see it: “a bright spot.” It’s our season to shine; let’s all do our part in making this nation great again!