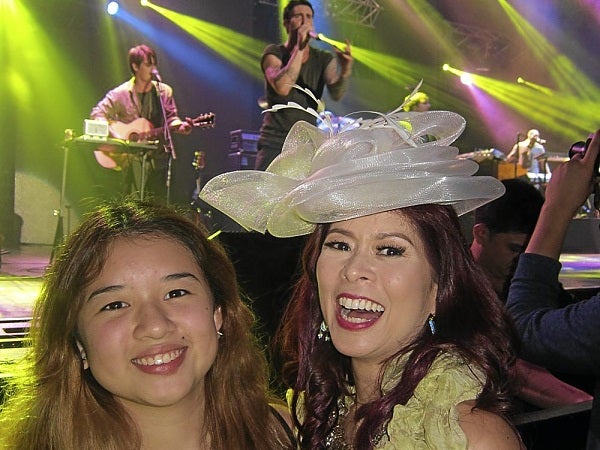 What in the world can surpass the colossal Bench Universe Denim and Underwear Fashion Show? Absolutely nothing. When it comes to titillation, Bench rules.

For the brand’s 25th anniversary, Bench king Ben Chan pulled out all the stops to showcase the hottest and brightest stars in the country. The two-night epic spectacle was a visual feast of flesh and fantasy as foreign and local male models went on an abs-fest.

The show was spiced up with the hunky rugby players of the Philippine Volcanoes, celebrity boxer Manny Pacquiao and wife Jinkee, and Bench’s iconic model, Richard Gomez.

The packed SM Arena in Mall of Asia roared as the show-biz glitterati sashayed up and down the elevated stage. On-screen bad boys Jake Cuenca and Paulo Avelino were among the most applauded. Heartthrob Enchong Dee took the dramatic entrance honors, descending from a lighted, floating canoe.

Among the ladies, sexy Lovi Poe created a scene as she morphed into a sci-fi sea creature, clad in an outfit by designer Furne One, who was the featured designer at the Red Charity Gala two years ago.

Completing the trio of Dubai-based designers was Ezra Santos, who I hope will also one day be a featured designer for the Red Charity Gala. Another designer from the Middle East, talented Albert Andrada, showed off his beautiful gowns, which I wore when I was featured in Metro Society with a fully suited—unfortunately—Jake Cuenca.

Philippine-based designers weren’t given short shrift at all. Rajo Laurel, Randy Ortiz, Joey Samson and Ivar Aseron were all give a chance to shine as brightly in the Bench Universe. Overall stylist Noel Manapat made sure they all gave an impressive display of “out of this world” creativity.

This year’s Red Charity Gala designer is Cebu-based designer Cary Santiago. With all the laser-cutout enormous wings and floating cherubs, his Bench Universe collection was loudly applauded. Lead star Coco Martin, who got the loudest roar, was Cary’s finale.

As the Bench Universe cast took their finale walk, the Bench King himself was presented and hoisted up by a hydraulic stage. Ben is not only on top of the world, but also on top of the universe.

Getting the energy even higher was Far East Movement. They converted the show to a happening dance party. I would have wanted to join the dance party onstage, since I was once a Bench billboard model, too, together with my year-old daughter Athena (the only one showing off her underwear—that was a few years ago now, as part of Bench’s “Wear Your Conscience” campaign with ABS-CBN Publishing).

That Bench billboard was taken by master lensman Jun de Leon. We were all reunited, Ben, Jun and I, in the Coca-Cola 100th Anniversary coffee-table book—quite literally, in fact, as Ben’s page is across mine.

Bench star Christian Bautista told me earlier that day that he was on a strict diet to make sure he looked great onstage. The “Asian-sation” singer is staging an extraordinary musical experience for his 10th anniversary concert, “X Class.”

“X Class,” which will be held at the Meralco Theater for five nights—Oct. 6, 7, 12, 13 and 14—gathers the best men in the concert scene to join Christian, such as concert director Rowell Santiago and musical director Louie Ocampo. “X Class” promises to give viewers an intimate yet spectacular musical show. (For tickets, call Ticketworld at tel. 8919999).

Did I say Bench rules when it comes to titillation? Not a week after Bench Universe, I was invited to the press con for their latest endorser—the incredibly sexy, high-pitched and well-tattooed front man of Maroon 5, Adam Levine.

The smooth-talking judge and coach on “The Voice” was in town for Maroon 5’s “Over Exposed World Tour” sold-out Manila concert last week. Adam was the honored guest at a Benchsetter Fun Meet the day before at the SMX Convention Hall.

Earlier that afternoon was the very intimate media affair at Salon de Ning at The Peninsula Manila. Host Mond Gutierrez interviewed the singer with questions given by some of the country’s top writers and bloggers.

Between questions, Adam turned to me and complimented my outfit! Clad with feathered wings, I told him I was channeling Victoria’s Secret models. In reply, he said I looked like one. I guess I was seated so he didn’t see how tiny I am.

In his Twitter account, @adamlevine, he said “Good morning Manila! Home of the most energetic, enthusiastic @maroon5 fans on earth!”

And later: “I’m ECSTATIC to be part of the Bench family. Great people and great clothes!”

Truly, Bench is the top of the retail universe!

I’d like to close with a final titillating tale about titties. Artist Sequi Cu Unjieng’s “Transcending Boundaries” is her third art exhibit—this one is all about artistically painted breasts. Each breast painting is from a real woman and features the uniqueness of each sitter.

It’s the perfect exhibit for October, which is Breast Cancer Awareness Month. Funds raised from the exhibit go to I Can Serve Foundation, which benefits breast cancer patients, and Friends Under the Tree, a nonprofit organization founded by nine high school friends from Assumption College who used to hang out under a tree on the campus.

The exhibit starts on Oct. 2 at the Ayala Museum.