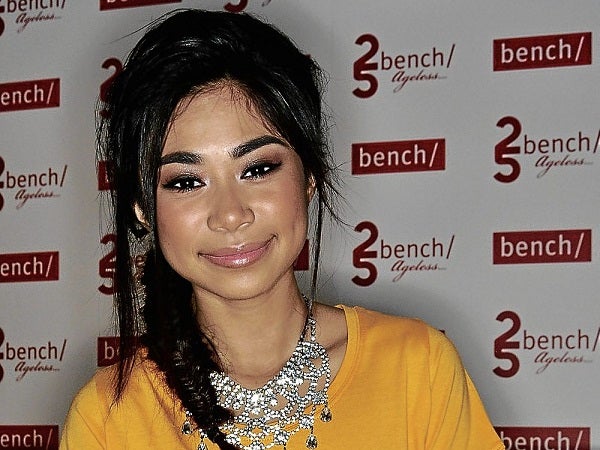 The challenge: 20 questions in 10 minutes.

The contenders: Inquirer Super and Jessica Sanchez. Actually, just Inquirer Super. Jessica didn’t know about the challenge. But she aced it anyway.

We holed up at the Edsa Shangri-La’s Sampaguita Room before the Bench press conference and quizzed Jessica about “American Idol,” Bench, fashion, her upcoming album and her newfound fame.

Bright-eyed, perky and even a little giggly, Jessica answered our questions fast—super fast.

The “Idol” tour is officially over—what do you miss the most about it?

I miss a lot of things about it. It was definitely a different experience for me. I miss the “Idol” family. It’s weird not having them around. I spent a whole year living with those people and now they’re gone. But we’re gonna meet up again in the future. I know that. And the other thing I miss is having a show and after every show we would have signings outside. People would just wait outside for us and we would sign their things and meet them. That’s one thing I really miss a lot—being able to go outside and see all these happy faces and seeing them so excited.

A lot. We spent a whole year together. There are definitely tons of memories, I can’t just pick one. We had a lot of silly mistakes and accidents that happen on the show onstage during the tour and backstage stuff. We definitely made so many memories. We had a lot of goofy times.

Filipinos have shown you so much love even during your days on the show—did that surprise you? How do you feel about it?

I wasn’t surprised, but I wasn’t expecting it either. I went  on the show not even expecting to make it that far. I was blessed to get the support that I got from everybody—from the Americans, from the Mexicans, from the Filipinos. They really supported me throughout the competition no matter what, even with the save and everything. They were behind me 100 percent. That’s why I’m so happy to be here and actually meet some of them and greet some of them and even sing.

We know a number of brands have been trying to get you as their endorser—why did you say yes to Bench?

I’ve heard about Bench. I knew Bruno Mars did it, I knew Adam Levine did it, so I was ecstatic when they came to me and they talked to me about it. I couldn’t pass it up. I love Bench, I love their clothing, it’s super comfortable and it fits me perfectly.

We’ve seen photos of the shoot you had for Bench— what was that like?

The photo shoot was one of the best experiences. The photographer was amazing and like I said, the clothes fit me perfectly. This was one of my first photo shoots so it was cool to experience it. It was so much fun.

Which of the clothes were your favorite?

I don’t know if they’ve released the picture yet, but there were green pants, a gold belt and this white top with a bow tie.

We know you love shopping—what have you bought in Manila so far?

The funny thing is when I had some free time off, we went to a mall, the closest mall, because I can’t really travel much here, I’m so busy. And the first store that we saw was Bench. I went straight in, I went shopping there and right after that, we had to go. I bought tons of jeans there, tons of sweaters and cute tops like this.

What are five fashion items you cannot live without?

A lot of things. Shoes are number one on the list. Shoes, jewelry. I definitely love jeans, big sweat pants, I love those, just tank tops and stuff. Simple stuff.

How did your love for fashion start?

It’s funny because before “Idol,” when I was attending public school, I was the most dorky kid ever. I did not know how to dress myself at all. (laughs) I would wake up and be like, “Oh, I’ll just put this on and this on.” And then when I started being home-schooled, I guess I found myself a little bit. I was singing and being with my family and when I had free time, I’d be like, “Let’s go shopping!” I learned more about colors and putting stuff together.

Pretty much like this, casual. When I’m not onstage, just jeans, a cute top or a simple top with some crazy shoes or just regular tennis shoes. I’m just pretty simple.

Is there anything you’d never wear?

No, not really. I’m willing to try anything. You shouldn’t be afraid of anything. There are so many trends out there and so many different fashion statements. There are people like Lady Gaga, who wear bacon, and it’s okay. It just depends on how you want to look that day. If I’m onstage, I have to be all out there but if I’m more simple, I’ll just wear a tank top. There’s nothing that I won’t try.

Tell us about your upcoming album—it’s coming out later this year, right?

We’re trying to push for the end of the year. We’re really working on that. Right when I get back, after Manila, when I get back to LA, we’re gonna push and work 100 percent on the album. We’ve been working on it throughout this whole tour, it’s been a big crazy ride. That’s the main focus when I get back.

Do you know how many songs are going to be in it?

I can’t completely say yet because we’re still working on it but there’s a variety of things on there and I’m really excited to show everybody what’s to come.

Yeah. I’ve performed it. That’s a sneak peek to what the album’s gonna be like.

What do you think sets you apart from other singers?

How has your family reacted to your success?

Positively. I haven’t seen them pretty much all year. I’ve only been home only six times this whole year. I miss them completely but they’ve been really positive. We’re planning on moving later and they’re completely down for the move, making sacrifices for my work and everything. As long as we’re together, we’re happy.

What is your ultimate dream?

I’m not really sure. There’s been some crazy things. I know there are people who throw stuff onstage for Phillip, but I haven’t gotten anything like that.

Yeah! The bras! (laughs) I never got any of that. But definitely the screaming fans. It’s definitely a big shock to me. I still put myself in the same position I did before Idol. I don’t think of myself as a big superstar. I feel weird when people are shouting my name and saying I’m their inspiration. I feel blessed but it’s like, whoa, it’s crazy. Even the little stuff that come commonly, it’s crazy to me.

What surprised you the most about Manila?

Everything. I didn’t know what to expect coming here. I didn’t expect anything, I just came here with an open heart and waited for it all to hit me and that’s what happened. I’ve tried different foods here, I haven’t really been able to explore the city but just being around the people here, they’re so friendly and nice. It’s a different feel from the States and I love it. I really don’t want to leave.