Too many mouths | Lifestyle.INQ ❮ ❯ 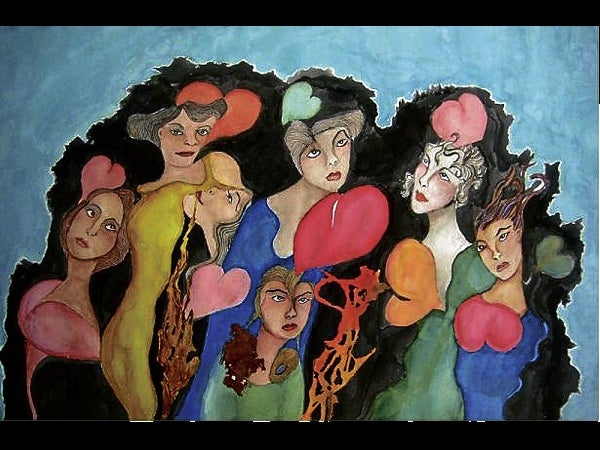 The next day the king sent his three sons out again. This time he gave them veils for their sweethearts to embellish. “A worthy wife will know how to make a good veil,” the king said.

And so the three again set out east, then west, while the youngest, as usual, walked straight to the beach where the tree was. “What’s the problem now?” asked the mouth, who had been watching Don Rodrigo from above.

“It’s another test,” said the youngest prince dejectedly. “This time my father has given me a veil. Whoever can decorate it to suit the king will be my bride.”

“And you still have found no sweetheart?” asked the mouth. The young prince shook his head.

“We will try to solve that,” said the mouth officiously. Don Rodrigo laid the veil out on the sand, went to the other side of the tree obediently and was promptly snoring.

Quickly, the mouth dropped down on the veil and hopped up and down, up and down on it. The veil began to transform into the finest lace suitable for a princess.

“Splendid!” cried Don Rodrigo. “Whom do I thank for this wondrous work?” Again, the mouth smiled and said nothing, swinging at the end of its branch.

Once more the young prince thanked the sea sprites at large, folded the veil and headed back to the palace. As usual his brothers were already back with their veils all finished and beautifully worked on. But again it was Don Rodrigo’s veil that overjoyed the king.

There was some grumbling from the elder princes. Then the courtiers said, “Whoever can make such exquisite lace must be as lovely as her work.”

“You must bring your future brides home tomorrow,” said the king, “for I have not long to live and I would like to lay my eyes on all three of them.”

The next day the princes set out eagerly to fetch their sweethearts. All except Don Rodrigo. Woebegone, he dragged his feet back to the same old tree by the sea.

“More needlework?” asked the mouth who was swinging happily in the sun. “No more needlework,” said the prince. “But now I have to bring back a wife—the one who made the handkerchief and the veil! Oh tell me, tell me, friend, where can I locate this marvelous creature?”

The mouth puffed up as much as it could with joy. The lips glistened more purply than ever. “It was I,” said the mouth proudly, “who embroidered everything, everything!”

Don Rodrigo was aghast “You?” he asked incredulously. “How is it possible when you have no eyes, no hands, no fingers?”

“Like this!” said the mouth, unhooking itself from the end of the branch and hopping on a leaf busily. Up and down, up and down many leaves it hopped. All the leaves got embroidered and some of the bark, too.

“But I can’t take you home!” said the prince. “I would be the laughingstock!”

“A promise is a promise!” said the mouth, raining embroidered leaves on Don Rodrigo’s head.

“It’s impossible!” said Don Rodrigo. “I can’t do it! You are too small and you are unbelievable!”

The mouth hopped angrily from branch to branch. “Your father ordered you to take home whoever did those tasks,” said the mouth quivering. “And I am the whoever!”

“No! A thousand times no!” said Don Rodrigo, striding away. Swiftly the mouth jumped onto the prince’s shoulder and clung there as he walked. “Get off me!” shouted the prince, “You can’t go to the palace—you’re nothing! Nothing!”

But the determined mouth hung on. Roughly the prince plucked the creature off his shoulder and threw it on the ground. With his boots he stomped hard on it. He did not stop until the mouth lay on the sand bleeding, covered with mashed leaves and sand.

Only then did Don Rodrigo realize the horror of what he had done. He picked up the smashed mouth and carried it lovingly in his palm. “My poor dear friend,” he wept. “What have I done to you? You helped me in my hour of need, and this is how I have repaid you.” Hot tears flowed down his face, falling on the mouth. “Only get well, and I will take you with me.” So saying, he brought the poor, dirty, violet-lipped mouth to his lips for a tender kiss.

The color of rosebuds

Immediately, he felt his lips burning. Smoke spouted out of the dying mouth and spiraled upwards. Don Rodrigo rubbed his eyes, for the smoke was blinding him. It took the shape of a beautiful maiden with long hair and shining eyes. Everything was lovely about her, but specially her small mouth, which was the color of rosebuds.

“Is it really you?” asked Don Rodrigo in awe. He had fallen instantly in love with the being beside him. He felt he had known her for a long time.

The girl nodded. Don Rodrigo took her hand in his and kissed it.

She said her name was Doña Luisa. An envious witch had come to her 16th birthday dance and cursed her and 24 of her friends. She turned them all into disembodied ugly mouths that were given to an ignorant childless couple.

The youngest prince was crying as he marched his exquisite bride to the altar. The dying king was enchanted by the choices of Don Alberto and Don Enrico. But he could not take his eyes off Doña Luisa.

Needless to say, Don Rodrigo and Doña Luisa were adored in the kingdom. They produced many children. Not a single one of them was only a mouth, and they lived happily ever after.

P.S. Jess Abrera says his lola used to tell him the same story. But lola said the rest of the “mouths” thrown into the sea did not drown but turned into steel wool. They were used for scrubbing palayok. It was so cute I thought I’d share it. There’s another version that says the couple asked and asked for a child, even if it was only a mouth. And they got it—a huge mouth!

Someone complained that “We Filipinos are really bastos.” But stories similar to this appear in every Asian culture. Nanay Onor told this story when most of us were 10 years old or below. She used 10 correct Tagalog words without malice and without flinching. Everyone just accepted it as a good story.

The word hiya should be related to things we have to really be ashamed of—and that’s dishonesty and wrongdoing.