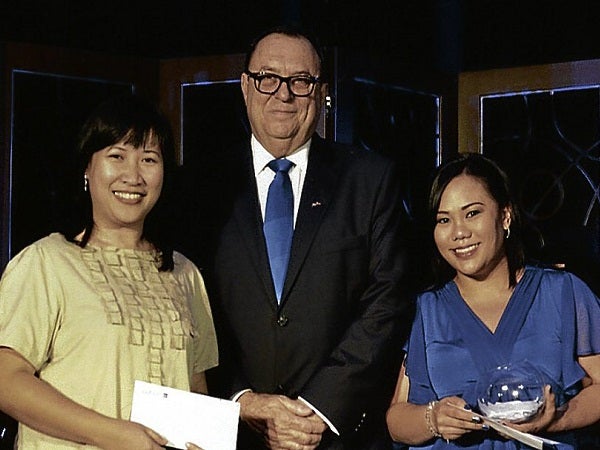 The Marco Polo Plaza Hotel’s general manager, Hans Hauri, and his wife, Bo, hosted a special dinner prepared by chef Gene Gonzalez at the hotel’s Café Marco. It was in celebration of the 30th year of Café Ysabel, a landmark restaurant in San Juan, Metro Manila.

The menu remained a mystery until the last moment. Chef Gene was in Cebu at the time with his son, chef Gino Gonzalez, for a Chinese food festival at the Marco Polo. Guests had an inkling, though, during the pre-dinner cocktails. Among the finger food was delicious shrimps and slabs of terrine on wheat bread.

Guests were seated at two round tables in Café Marco’s beautifully laid-out private area. Hauri welcomed all and introduced chef Gene who really doesn’t need introductions, since he has been coming to the Marco Polo for special events during the last six years.

Applause greeted the two chefs when they came in. Everyone was attentive as they explained the first two courses. The grape and white gazpacho was followed by a curried Tarte Tatin with pan-fried foie gras.

At the table presided by Hans and Bo Hauri sat Duke Frasco, the mayor  of Liloan, a municipality north of Cebu City, and his lovely wife Christina Codilla Frasco. They had just christened their firstborn, Sophia, a celebration that took place at the Marco Polo.

Dinner progressed with a Napoleon of scallops and prawns, lightly smoked sea bream with garnishings, a passion fruit sorbet, and the juiciest ever medallion of beef with glazed truffles. This was accompanied by red wine specially made and bottled for Café Ysabel.

A variety of desserts were served on a long rectangular plate. There would be more, as in chocolate truffles, with the coffee, tea or digestive infusion.

What’s next at the Marco Polo? They are celebrating Oktoberfest on Oct. 26 with the usual fanfare. Then there’s Soiree Beaujolais in November, and a series of events to highlight the forthcoming Christmas season.

On Sept. 28, Radisson Blu hotels all over the world  became “blu,” as indicated in their invitations. In Cebu, it was quite a bash, and guests arrived in cocktail chic attire, most everyone opting for something blue.

But it was easily Teresin Mendezona who made a fashion statement in an ensemble that included two strands of blue pearls. Beside her were Marlyn Mondoñedo, Arcy Gayatin, Marissa Fernan and Elvira Luym, who’d all be at the next shindig not too far away.

That was at the atrium of North Wing in the nearby SM City Cebu for the fifth year of Gear and Glam, a two-day display of vintage cars from the collections of Performance and Classic Car Enthusiasts (PACE).

Lui Alvarez, Grand Benedicto, Kenneth Cobonpue, Glenn Soco, Joseph So, Jay and Chris Aldeguer, Darren Deen, Harley Yuman, and others  usually drive their own cars during the opening day bash. This year, there were even more sports cars, including a magnificent 1923 Studebaker.

The Gear and Glam opening also included a fashion parade of gowns designed to match or complement the cars that glided with the models; some even got to ride on them. A screen featured the cars as they appeared in vintage movies.