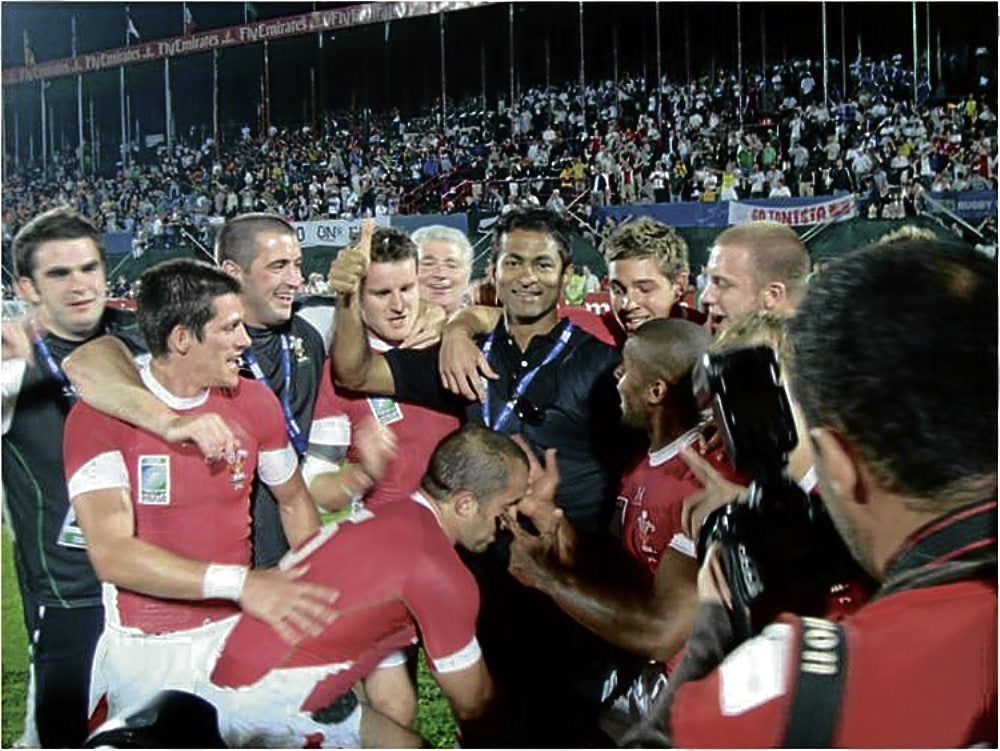 He’s a doctor to tennis superstars

Dr. John, an Indian national, is an orthopedic and sports medicine surgeon who has attended to the injuries of these and other top-seed players. He was consultant and tournament doctor for the ATP/WTA Series Tennis 7’s 2007 and 2008 seasons.

Relieving cramped calves and popping blisters, however, weren’t Dr. John’s only duties. Five years ago, when the doctor devoted weeks at a time to overseeing the aches and pains of the best tennis players in major tournaments around the world, he went as far as red-flagging the likes of Serena Williams and Maria Sharapova from continuing a match—particularly when their injuries could compromise not only their game, but their health in the long run.

Sharapova was forced to bow out of one tournament when a sprained ligament caused her knee to swell. “She cried a lot,” recalls Dr. John of the incident. “She tried to push us to get her back into the match, but we said no.”

Of course, no athlete wants to be sidelined indefinitely, so some will try everything to prove a doctor’s diagnosis wrong. Dr. John relishes with a chuckle the time Djokovic, then with a sprained knee, took it upon himself to remove the brace on his leg just 24 hours after his injury occurred.

“Jumping up and down, the man came up to me a day after and said, ‘Whatever you want me to do, I’ll do it! I’m perfectly fine! Doctor, I promise you, you can check me!’” says Dr. John, laughing at the thought. “So I told him, ‘If you can mimic all the players, I’ll let you go.’”

Djokovic then proceeded to do his best impressions of Federer, Nadal and Sharapova. When Dr. John agreed to sign the papers that would allow Djoko to play, the Serbian hugged him. “He’s a crazy guy,” chuckles Dr. John, obviously fond of the champion. “A lot of people don’t like him because they think his behavior’s childish. But I like him.”

Describing each star as “different” and “special,” Dr. John, who is connected with Dubai’s International Modern Hospital and now treats only players who request for him, says “over the years, you get to know them better. Most of them will open up about personal stuff, like the stress they go through. They learn to trust you, so when they lose a game, or want to joke around, they come and talk to you. They feel relaxed around you and they can’t do this with just anybody.”

Understandably, the doctor has a soft spot for Roger Federer; after all, it was the number one tennis player in the world who got the surgeon hooked on the sport.

Three years ago, Dr. John says Federer pulled him out of his clinic and into the court, gave him a racquet, and started hitting balls his way. Dr. John, whose only previous racquet sport was badminton, dutifully hit back.

The next day, Federer got Dr. John back on the court; since then, the surgeon has been playing the sport consistently, almost daily the first six months.

Though frequent playing led to a minor shoulder issue that prevents him from serving at the moment, Dr. John says it was a brief encounter with Nadal that nearly tore his arm off its socket—or at least that’s what it felt like. “Rafa saw me playing with Roger so he thought I knew how to play,” recounts the doctor with a grin. “The first time he served to me, it was so hard and fast I couldn’t even see the ball!”

The second time Nadal served, Dr. John hit back and could’ve sworn he dislocated his shoulder in the process. “I never saw Nadal play casually,” he says in awe of the Spaniard who is in the midst of recovery from nagging knee injuries. “He’s a very intense player.”

Clearly, it’s the intensity of the game coupled with the friends he’s made along the way that explain why Dr. John favors tennis over any other sport.

He was born to an athletic family—his dad was with India’s junior national basketball team, an uncle was a volleyball player, and a cousin’s sister is the captain of India’s hockey team.  Dr. John is a runner, volleyball player, badminton player and city-level cricket player.

He says tennis is the only sport that makes him “miss a part of my career as a sportsman.”

Born to a generation of Brahmins who converted to Christianity (hence his Western name and prominent crucifix necklace), the tall, strapping George Poovathoor John had the makings of a serious athlete. Medical school shelved any dreams of turning pro, but it still allowed him to pursue his passion on another level.

“I always wanted to do something in sports,” says Dr. John, who studied orthopedic surgery in Mangalore, India’s Kasturba Medical College and finished his master’s degree in sports medicine at Nottingham University in the UK.

Describing himself as a “hardcore surgeon” with a special interest in arthroscopic surgery, Dr. John has seen and treated his fair share of fractures and dislocations as the tournament consultant and chief medical officer for the World Cup Rugby 7’s series from 2003 to 2008.

Manchester United’s Wayne Rooney was one of his patients. In 2006, the football striker fractured the base of his fourth metatarsal bone in his right foot after a painful run in with Chelsea’s Paul Ferreira. Thankfully, this was one injury that didn’t require surgery; with six weeks of rest, Rooney was fit to play in the World Cup.

“Rest,” says Dr. John with a knowing chuckle, “is the most difficult thing to tell an athlete.”

And yet, even with great strides in sports medicine and rehabilitation, it’s a prescription that works for injuries incurred from wear and tear (the ankles, knees and hamstrings being the most vulnerable spots), high-impact sports, or simply from attempting to do too much too soon.

Oxygen chambers and hydrotherapy can help hasten healing, as can rehab methods such as  taping and proprioception.

The surgeon, however, always falls back on good old-fashioned RICE: rest, ice, compression, elevation. Dr. John, who doesn’t like masking pain with medication, says the real road to recovery “is a long, slow process. Players don’t like it and they hate us for it.”

While injury seems inevitable, it can be avoided or at least minimized and delayed with solutions that are so basic yet often taken for granted.

“Proper warm-up, proper nutrition and hydration, rest, and sleep,” enumerates Dr. John. “All players know it but they tend to break the rules.”

Admittedly, the surgeon has been known to break some rules of recovery himself. When British ultrarunner Nick Peters tore cartilage in his knee a month before the Marathon de Sables, a grueling 250-km, six-day race across the Moroccan desert, Dr. John employed a minimally invasive “keyhole opening” surgery on the injured joint.

Peters went on to join the race with “no trouble” on his knee; not only did he finish the multiday marathon, he raised 4,153 pounds for charity.

“He trained two years for this race and insisted on doing it despite my reservations,” explains Dr. John, who monitored Peters closely before sending him on his way. “More than me doing the surgery, the thing about these players is they are the warriors, they don’t care about anything. They just want to do what they plan to do and when I see that, I don’t have a choice but to support them.”

The surgeon did exactly that for Wales’ national rugby team in 2009. After performing surgery on an injured team captain, Dr. John gave him the go signal to play three days later. It was a huge gamble, but it paid off: the team went on to win its first-ever World Cup, beating New Zealand in the quarterfinals, Samoa in the semis and Argentina in the finals.

As the team received its trophy, the captain hoisted Dr. John on his shoulders and paraded him before a crowd of 60,000 spectators. It was the proudest moment of this surgeon’s life.

“I’ve had ups and downs in my career,” he says, “but some of the experiences are so enriching, you can never forget them.”

These days, the 39-year-old surgeon’s goal is to get as many people to love sports as much as he does.

In Kenya, he’s building the world’s biggest sports medicine center, a facility on a 250-acre property that is scheduled to open in six months.

An equally ambitious project is also set to rise in the Philippines. With his friend and consultant, tennis coach Dustin de Torres and a group of foreign and local partners, Dr. John is laying the groundwork for a first-class international sports and rehab center.

“The sports center in Kenya is for Africa and Europe,” explains Dr. John. “And if everything goes well, the Philippines center could be the hub of Asia.”

The surgeon, whose wife is Filipina (“one of the more famous and skilled nurses in Dubai,” he declares proudly), considers the Philippines full of potential when it comes to sports.

“Today, we saw a little girl play tennis,” he says. “I was amazed at how well she was playing! With the right training, she could be the next Sharapova.”

He’d also like to help coaches improve their training techniques and introduce Filipino doctors to the latest in rehabilitation.

But simply getting into sports—any sport—is good enough for this doctor. “It doesn’t matter what level you play,” he assures. “Sports takes care of your health, your fitness, your emotions, your relationships. It is the answer to many things.”