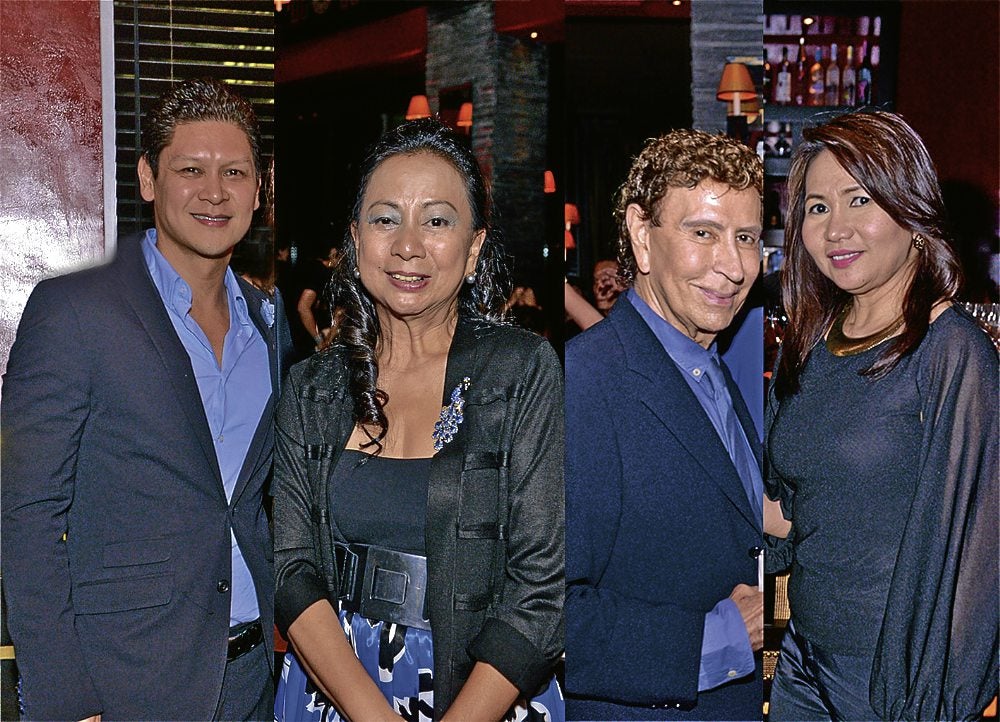 The Philippine Tatler Magazine turned a glamorous 11 years old as the chronicler of high society last September 19, dahlings. It invited its friends to an intimate cocktail party at the chic Buddha Bar on Kalayaan Avenue, Makati.

Petron Blaze’s team of good-looking basketball players kept to themselves at one corner of the bar, too shy to circulate or socialize. Were they not comfortable with that kind of a crowd? Or maybe, they didn’t want to spend time having their photos taken by or with the swooning women at their side?

But one thing’s for sure, they were a standout in that A-list set, palanggas.

Well, we all know that no cocktail bash would be complete without drinks to soothe dry throats. A variety of spirits was served, from vodka to wines, cocktails and beer, including San Miguel beer. Chilled Moët & Chandon champagne and Belvedere unfiltered and Tatler’s special champagne cocktail specially concocted for the event were also served.

Then moi moved on to the next must-be-seen-in event, Bulgari’s  magnificent launch of the Serpenti line of jewelry, watches and leather pieces, at the Bulgari Lounge, Shangri-La Makati.

We were treated to an awesome hard-to-beat Italian fare, all excellently done by Shangri-La’s high-end Red resto, palanggas.

One couldn’t miss among the chi-chi invitees cool couple Atom Henares and Vicki Belo of the renowned Belo Clinic, which helps me to look good, and provides me with my much “talked-about” skin.

The big surprise took place outside the lounge, as 12 models in white flowing gowns were revealed wearing the divine Serpenti collection. They then entered the lounge to mingle with guests and give them a closer look on the jewelry line.

Loads of the glam women-guests were grabbing the new line to take home, as the cash register got hot from the endless ringing of the box.

Get the picture, dahlings? Après all that, moi chilled out at Prive where there was a tribute for Veejay Floresca.

He’s smart, talented, and one of the country’s in-demand designers, dahlings. He’s Veejay Floresca, and he was given a star-studded farewell bash with style by the Prive Style Series at the Prive Luxury Club, natch! The send-off was given since he was jetting off to San Francisco for further studies in fashion design. This would bring him one step closer to “achieving my dreams of international success,” he told us.

The happening got on a roll with the Zombettes’ Sanya Smith titillating everyone with an eclectic playlist, après a short presentation from event sponsor Jockey, a fashion film by Ynigo Santos showcasing Floresca’s most popular works modeled by Jessica Yang.

This was followed by a fashion show.

Among the muses were GMA talents Louise de los Reyes and Kris Bernal. “Veejay designs clothes that are flattering to a woman’s body, the dress I’m wearing has an amazing fit!” said De los Reyes.

Kris Bernal said she had nothing but the best wishes for Floresca. “It was really an honor to be one of his muses, especially since I’m such a fan of his work,” the actress said. “I wish him good luck on his studies! I’m sure he’ll wow us again when he comes back.”

We wish Veejay well as he turns a new chapter in his promising career, di bala, palangga?