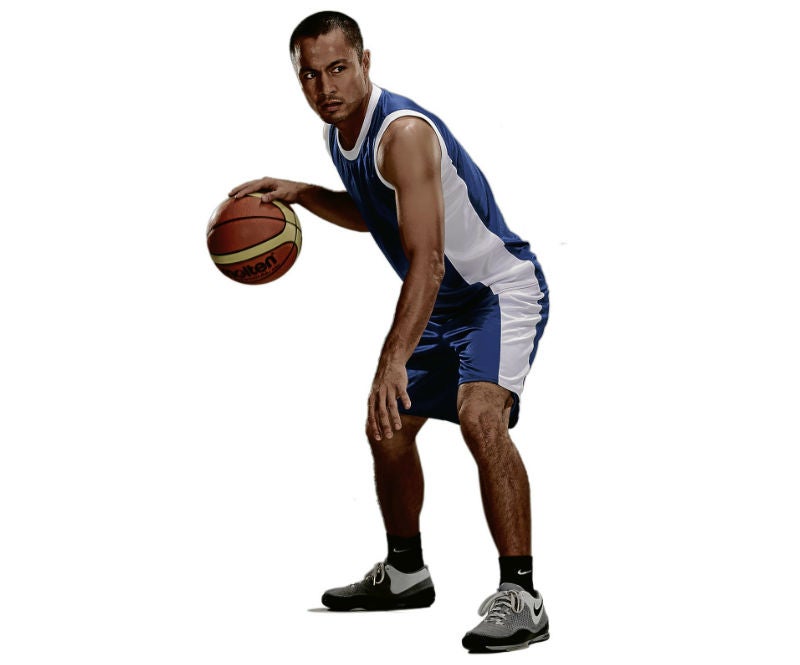 Against his doctor’s orders, Ramsay, who was recovering from surgery, competed in the World Flying Disc Federation 2012 World Ultimate & Guts Championships in Japan, where the Philippines upped its ranking from 15th to seventh place. Last month, he played at the Singapore Open 2012, where Team Philippines won. Although he was just supposed to coach, he ended up playing.

Last year, the media reported on Ramsay’s arm injury during the finals of the International Frisbee Tournament. “I flew, landed on my back and my bone came right out of my forearm, broken in three places. Now it’s been put together by 15 screws and three titanium plates,” says Ramsay showing the stitches on his arm like a badge of honor.

Three weeks after the operation, the unstoppable Ramsay enjoyed the family holiday in Marinduque, jumping off the cliff into the ocean with a broken forearm.

“I couldn’t keep still. Two months later, I started to play Frisbee,” he says. He admits that when he went to the Singapore Open without any physical conditioning, he felt it.

“Still, we got the winning catch. After the tournament, I was ready to pass out and go back to the hotel. I didn’t stay for the awards ceremony anymore. My knees were swollen and I was so tired. No sleep, no training, no nothing for so many months and I was going into a competitive tournament. Not smart. Puso lang ang nagdadala. (The heart is holding me up),” he says.

It also helps that Ramsay has been taking a daily fatigue reducer.

He recalls that three years ago, while he was juggling four soap operas a day and a movie, heading the Philippine Frisbee team and helping out in the family business, he would be in and out of the hospital for several reasons.

“I’d be called in Laguna in the morning then go to Pampanga in the afternoon. One time we were shooting in Navotas, where I got dengue. I was hospitalized for a week. Another time, I was hospitalized after a sporting accident,” says Ramsay, referring to knee surgery after some injuries playing Frisbee. “That happened because I was tired.”

He was also confined for overfatigue, dehydration and upper respiratory infection because of a weakened immune system.

“We worked in dirty areas. When the immune system is weak, you can catch anything, no matter how safe you try to be—like having clean hands all the time. If somebody on the set is sick and my immune system is down, I’ll catch it anyway.”

It came to a point that Derek’s doting mother, Remedios, would ask him if it was all worth it.

One day, a manager from the Germany-based pharmaceutical company Boehringer Ingelheim gave him product samples of Pharmaton, a nutritional supplement with a potent formula of multivitamins, minerals and ginseng.

Ramsay was looking for a health supplement to help him cope with the stress of doing many activities. “The teleseryes can kill you. The work runs for more than 24 hours. As I was bouncing from set to set, my body was feeling tired. I couldn’t focus. I couldn’t memorize lines.”

“When the product came into my life, things changed. My problem was focus,” says Ramsay. After trying out Pharmaton for a week, he saw results.

“Before, I’d read two lines, then I would skip one page to the point I’d only memorize my lines when the scene came. There was no concentration. Now I’m back to reading my script over and over until I feel my character. No more feeling of sleep deprivation and I’m not grumpy,” says Ramsay.

He also pops a Pharmaton to help him relax and sleep better. “Basically, it’s what helps you to set your mind into your goal, so you can do it better.”

Ramsay notices the supplement’s effects when he does his morning pushups. “To get yourself to do it, you need to stay focused on the form and the discipline that you’ve developed through the years and not get lazy. It keeps me focused on the way I want to live my life.”

Asked how he was cited as having the sexiest abs in show biz, Ramsay replies with a chuckle, “I don’t isolate my abs. My exercise is Frisbee, basketball, football, golf. Sitting properly helps your abs. My mother would tap my back if I was slouching. If you sit properly, your core is engaged. Some exercises I do in the morning require 300 muscles. It kick-starts your metabolism and burns more calories.”

At the interview, Ramsay still looks fresh despite the fact that he didn’t get much sleep. “I’m a zombie right now.” The day before the Pharmaton press conference, he was taping for his new show in TV5, “Kidlat,” where he plays a superhero. Strapped on the harness all day, he fought villains. After the taping, he rushed to a press conference to promote his movie, then to the recording studio for dubbing.

Performing can drain him. “I can run 10K and not get tired.  In dubbing, you have to draw out all your emotions to portray a scene. That for me is a lot more tiring. After acting everything out in front of the camera, you have to do it all over again for the dubbing. It’s so hard to go back to that emotion and watch yourself, and try and redo the scene when you’re doing it in front of the monitor, watching numbers because you have to time your dialogue.”

When he finished at 3 a.m., he took a brief respite and rushed to Makati Shangri-La to meet the press. “Tomorrow, I’m a superhero again,” says Ramsay.

Dr. Ivan Olegario, corporate physician of Boehringer Ingelheim Philippines Inc., explains, “Our body can adapt to stress so we can perform at higher levels than what we are used to. But we need to have our bodies stay healthy, which is why we need immunity. We want energy to reach peak performance and maintain good blood sugar management. Fluctuations in blood sugar can lead to ups and downs in emotion.”

He says Pharmaton in itself does not provide energy. However, it converts the energy from food into usable energy more efficiently. “Hence, eating a well-balanced diet low in simple sugars, and rich in complex carbohydrates and proteins, ensures that Pharmaton has something to work with.”

Olegario adds that B vitamins, magnesium, phosphorus, copper and iron are essential in the conversion of food into usable energy to diminish fatigue. Pharmaton uses Panax ginseng, a key herb in Oriental medicine, which is believed to improve energy metabolism. “Other studies suggest that ginsenosides (the active ingredient in ginseng) may help sustain the health and efficiency of brain neurons,” he says. Ginsenosides have been found to improve absorption in the digestive system.

Pharmaton uses G115, considered the gold standard in ginseng extraction. Because of the standardization process, there is a consistent amount of Ginseng G115 in each capsule. Combined with a compound, deanol, performance in activities is enhanced.

Olegario points out that although it is an over-the-counter drug, Pharmaton is considered a medicine. With regular use, the capsules are said to keep energy levels up throughout the day.