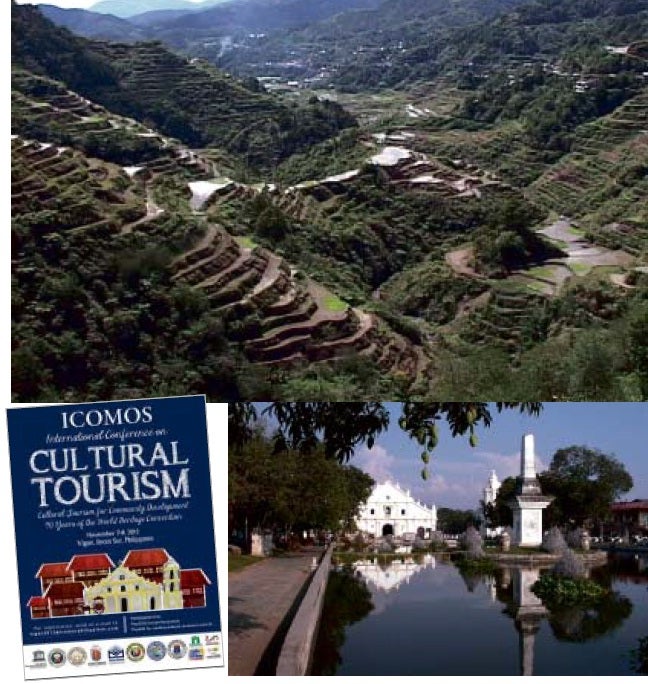 TOP: TRUE TO the Ifugao spirit, the local community reclaimed possession of their rice terraces, found the balance between tradition and contemporary culture, and worked out a system of maintenance that resulted in the removal of the terraces from theWorld Heritage in Danger List. Above: Vigan has found the balance between heritage and community development. It has been recognized as Best Conservation Practice winner among 28 other international entries to the Unesco search for Best Conservation Practice amongWorld Heritage Cities.

Year 2012 is a banner year for the Philippines in conservation and management of World Heritage properties.

Last month, the Unesco World Heritage Center announced in Paris that the Historic City of Vigan won the highest award for the Best Conservation Management of World Heritage Properties.

Last June, the Rice Terraces of the Philippine Cordillera was removed from the World Heritage in Danger List, with high recognition being given to the Ifugao community by the members of the World Heritage Committee during its 36th Annual Session in St Petersburg, Russian Federation.

The Rice Terraces of the Philippine Cordillera, a World Heritage property composed of five terrace-clusters in Ifugao province, had been placed on the List of World Heritage in Danger because of the site’s deterioration over the years due to overlapping factors, including weak management systems; conflict between traditional and 20th-century agricultural and cultural practices, which resulted in neglected irrigation and the degradation of the terraces.

The criteria for the decision to remove the property from the In Danger List included successful site restoration and conservation, as well as planning and proper management.

Most significantly, members of the World Heritage Committee warmly applauded the Ifugao community which worked closely to save their terraces with the local government, the private sector, and with some assistance from the international community.

The rice terraces were inscribed on the World Heritage List in 1995 as an “extraordinary example of an evolved, living cultural landscape,” terraces carved by Ifugaos following steep mountain contours, a tradition still retained today after centuries of use.

The terraces today are “the fruit of knowledge handed down from one generation to the next, and the expression of sacred traditions and a delicate social balance.”

Outstanding is the role of the Ifugao people in the conservation process of the Rice Terraces of the Philippine Cordillera that was done mostly through local, community-based effort and stakeholder participation.

The Historic City of Vigan, one of five Philippine properties inscribed on the Unesco World Heritage List, received the highest award in the Best Conservation Management of World Heritage Properties, a special award given by Unesco to celebrate the 40th anniversary of the World Heritage Convention in 2012.

Vigan was cited for its good management practice achieved with relatively limited resources; integration of the local community into many aspects of the sustainable conservation and property management; development of an interesting multifaceted approach to site protection.

“The judges did not only focus on conservation of the city but also the total development of the city, which envelops tourism, water, environment protection and other aspects,” said Vigan Mayor Evan Marie Singson Medina, who will receive the city’s award during the World Heritage 40th-anniversary celebrations in Kyoto on Nov. 8.

Vigan, established in the 16th century, was inscribed on the World Heritage List as the best-preserved example of a planned Spanish colonial town in Asia.

“Its architecture reflects the coming together of cultural elements from elsewhere in the Philippines, from China and from Europe, resulting in a culture and townscape that have no parallel anywhere in East and Southeast Asia,” states the World Heritage inscription.

Among the outstanding values of Vigan which merited its inscription as a World Heritage property is that the city represents a unique fusion of Asian building design and construction with European colonial architecture and planning.

Outstanding is the fact that both conservation achievements were the result of work and commitment from the resident communities of both properties, which aware of the value of their heritage, worked together with local government, private entities and NGOs, and which directed foreign interventions toward their specific needs.

Outstanding, too, is the fact that both properties achieved internationally acclaimed conservation standards with extremely limited budgets.

The Philippine Committee of International Council of Monuments and Sites (Icomos) hosts the Cultural Tourism for Community Development Conference in Vigan on Nov. 5-10, an event made even more significant that Unesco has recognized Vigan as a global leader in community-led conservation.

The international community acknowledges the Philippines for leading the way in community-based conservation. At the Vigan conference, the Department of Foreign Affairs has invited participants from developing countries to learn from the Philippines how to introduce to local communities that heritage is an unrecognized driver for development.

With the constant state of pressure that Philippine heritage is in, knowing that we have done something (two things, actually—Ifugao and Vigan) right has brought international honor to the professionals who work in conserving our heritage.

Congratulations to all who have worked in the Rice Terraces of the Philippine Cordillera and in the Historic City of Vigan.