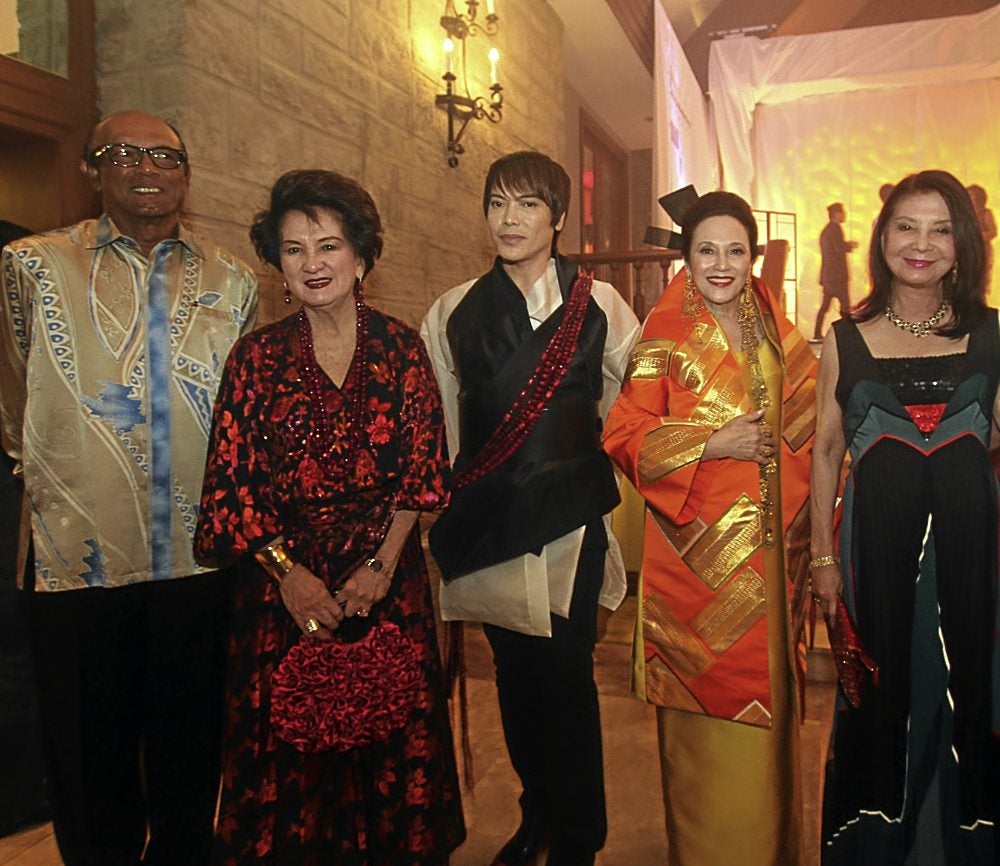 Dancing laser lights and breathtaking taiko drumbeats had people all  agog over the Ablazablaze 2012’s exhibit, “The Emperor’s New Clothes.”

Everyone was completely captivated with the fashion and accessories of versatile designer Junjun Ablaza, whose birthday coincided with the exhibit’s opening.

Ablaza said the concept of the designs was “Japanese culture and arts through Filipino eyes.”

To open the exhibit, they waved feathers like royals, palanggas, “sending good fortunes to the journey ahead” of the celebrator.

Some of the photos moi has chosen are on this page. Each photo symbolized a word taken from the letters of “ablaze,” ultimately describing the story of the photo. The photos showed mannequins draped in kimonos and belted by obis, and wearing gorgeous accessories styled by the master himself, Junjun, but who else, palanggas. Copies of the exhibition catalogues produced by Vibal Publishing were given to the guests, dahlings.

Here’s a toast of Moet and Chandon chilled champagne, Grand Marnier and Belvedere, to the creative Junjun Ablaza!

The environmentally sound traditional method of using a single hook to catch one fish at a time, was the focus of discussion at the Milky Way Café in Makati. TV personality Karen Pamintuan hosted the event.

Welcoming the invitees and expressing his appreciation of the partnership with Century Tuna were WWF-Philippines CEO Lory Tan and Conservation Programs head Joel Palma, palanggas.

“We all know that the sustainability of fisheries, particularly of tuna, is important to our fishing sector because of the nutritional and economic benefits gained from it,” said Palma. “This is why WWF-Philippines focuses its efforts on promoting sustainable fishing practices such as tuna handline fishing.” The forum also launched Century Tuna’s new product, “Century Tuna Handline.”

The new product uses individually caught Yellowfin Tuna chunks in healthy olive oil, which is good for the health because they have Omega3 and DHA.

For every purchase of the product, P1 goes to the WWF-Philippines’ handline tuna fishery in Pasuquin, Ilocos Norte, a super great idea to promote tuna fishing the correct way, dahlings.

“It’s an honor for the brand to be part of this noteworthy project,” said Century Canning Corp. VP Greg Banzon. “We hope that more projects like this will be launched in the future and that Century Tuna will be given the same opportunity to support them.”

Years ago at the Hague in Holland, I noticed in a supermarket shoppers going around with pushcarts with loads of Magnum Ice Cream. Moi couldn’t help at one occasion asking a lady, who replied: “My whole family loves it any time of the day, especially during the summer months.”

So when Magnum was introduced in the country, I thought, the ice cream has really come a long way, dahlings.

Just a couple of weeks ago, this in-demand ice cream brand came out with an addition to its lineup—the yum-yummy Magnum Choco Cappuccino, a perfect blend of creamy vanilla ice cream with smooth cappuccino sauce ripple, covered in thick, cracking Belgian chocolate and sweet crunchy pieces. The launch was held at Las Flores restaurant at the Bonifacio Global City.

Getting this cool happening on a roll was John Concepcion, CEO and managing director of Unilever RFM Ice Cream, Inc., who thanked the invitees “for your unwavering support of the Magnum brand.”

“We are very excited for this unveiling of the Magnum Choco Cappuccino,” said Brian Chanyungco, Magnum brand manager. “This flavor is perfect for Filipinos simply because we love coffee, as shown by the many coffee shops in the country.  So now you have a product that offers coffee, ice cream and premium Belgian chocolate. I don’t think it can get any better than that!”

And that is the awesome truth, palanggas!