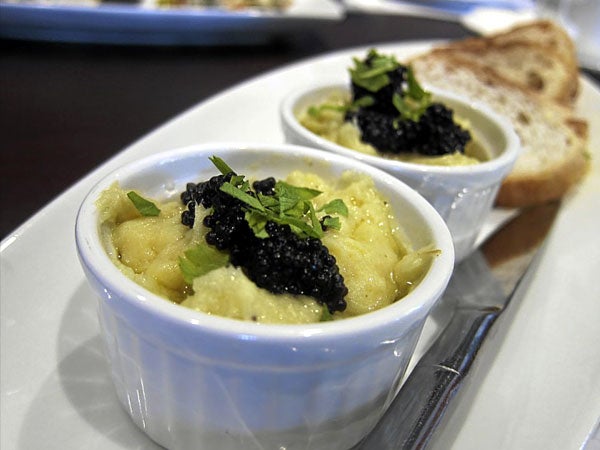 “During (World War II), we were dropped off in France and we passed by Lourdes,” shared Don Marcos Roces. “I prayed to the Virgin of Lourdes: if I survive this war, I promise to pray the rosary twice a day, once in the morning and once at night… I have kept that promise.”

My sister and I were lucky to chance upon Lolo Marcos, now the patriarch of the Roces family at age 93 (he turns 94 in December) on the Sunday when we first dined at Casa Roces.

“Is this you?” I pointed to a sketch of a man on the paper placemat that had the restaurant’s name on it. This drew a hearty laugh from Peachy Prieto, daughter of Benito “Bibelo” Prieto and Antonia “Chucha” Roces, and the silver-haired beauty and brains behind Casa Roces.

“No, that is Chino Roces!” she chuckled.

The restaurant was formerly a Roces ancestral home, where National Artist for Literature Alejandro Roces lived. The family wanted to sell it but Peachy refused – “Sayang naman.”S

Today it stands as a tribute to the Roces family. Tina Bonoan, interior designer, creatively lined the ceiling of the receiving area with printouts of newspapers from the time when Thailand was still Siam (Siam became Thailand in 1939). Portraits of ancestors, including the late Chino Roces, line the wall. Pointing to one, Peachy Prieto shared, “That is Marcos, the father of Lolo Marcos whom you just met.”

In the gallery on the second floor, there are three huge portraits of the three Alejandros of the family. “Our family was very creative with names,” laughed Bianca, daughter of Peachy, who was also instrumental in resurrecting their home to become Casa Roces.

I learned quite a bit about the Roces family over that Sunday lunch: that the family owned Ideal Theater back in the day and would entertain not only stars but legends such as Ava Gardner and Charlton Heston when they would come to the Philippines for the premier of their movies; that the family is responsible for La Vanguardia, Tribune, Liwayway and Manila Times, after which function rooms in the resto are now named; that it was Don Joaquin “Chino” Roces who spearheaded the campaign for a million signatures to convince then Mrs. Corazon Aquino to run for president against  former President Ferdinand Marcos.

But most of all, I learned about the family’s love for good food. The setting is not as high-brow as neighbor La Cocina de Tita Moning’s, another restaurant in the Malacañang compound serving heirloom recipes. In fact they call the dining area Kafe Chino, pun intended, offering a relaxed atmosphere where you can laugh as boisterously as you please. But both are driven by an exuberance for sharing the menus that can only be complimented by fascinating family conversations.

The Lengua in Mushroom Cognac Sauce was inspired by the family cookbook. It is soft and made especially tasty by the generous amount of olives that come with it. The hefty serving of Bulalo Steak a la Pobre is very Filipino in flavour – in a good way. Taste it and see what I mean. The salad very creatively uses deep fried lengua. And their molo comes with a poached egg.

There are chorizo-based recipes that can never go wrong. The Choritos en Balsamico will keep you munching so happily you will forget that the entrees have taken their sweet time in coming to your table. The Fideos with Spanish Chorizo a la Diablo will also leave you satisfied. The truffle mushroom soup will instantly capture the heart of truffle flavor lovers.

Then there are the more common, everyday recipes, such as the Binagoongan and Pinakbet, which seem to be more the contribution of Cravings (which operates the restaurant) than from the family’s cookbook. The desserts are also more commercial than heirloom.

However, the appetizers are exceptional! Start with the creamy bacalao paté. This is a brilliant concoction – bacalao spread on bread. Interestingly enough, the saltiness is not from the cod but from the caviar atop it. It reeks of relaxed sophistication that is addictive; ask for extra pieces of bread! Or start with the mussels (Mussels a la Roces), a very refreshing appetizer that comes alive in your mouth with their use of lemon and arugula.

After your meal, instead of just having a smoke on the beautifully renovated patio, take a tour of the house. The second floor, after the restaurant formally opens, will have space for a gallery. The old bedrooms and smoking room now serve as function rooms.

What impressed me most was that while it has become a restaurant, Casa Roces is still something the Roces family can call home. Especially when Peachy Prieto is around – and she seems to be quite the hands-on restaurateur:  there is so much warmth and vibrance in the air. The restaurant effectively offers not only good food but a history showing the family’s love for our country, generation after generation. It’s quite fitting that they are located across Malacañang. Maybe they can inspire the important people who work there! •