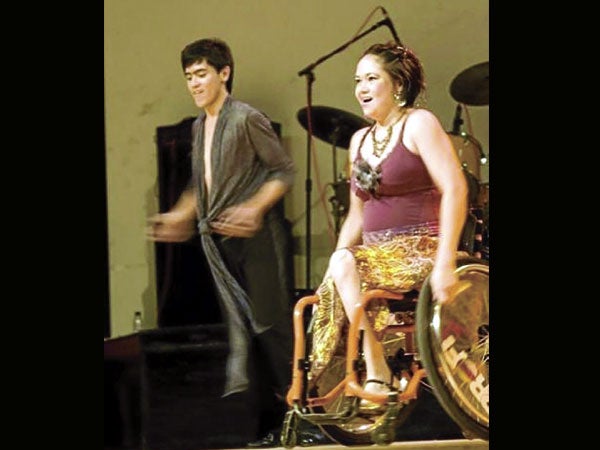 Dancing with wheels: Mingarine shows off her dancing skills in an invitational concert held in Timog Ave. in September 2009

A beam on the second floor of the green-and-pink pastel apartment serves as a victory shelf of sorts, where sits a collection of trophies and coaster-sized medals for various achievements in sports.

Obviously it’s the home of yet another Filipino athlete who continues to step up in her game. Except that this athlete strides to her rightful place in the competition on an artificial leg.

Purificacion Elks Mingarine has never let that little detail get in the way of her responsibilities as a member of the national table tennis team.  Named after her maternal grandmother and actress Elke Sommer, her father’s favorite among Hollywood stars of the ’60s, Mingarine knows that staying on in the team could mean longer practice hours and more rigorous training. But she doesn’t mind; she knows she won’t be coming back from a game empty-handed. Already, she has a shelf of trophies to prove it.

“I don’t want to look for a regular job just yet so I can attend to my duties in the national team,” says the 43-year-old player in Filipino. Playing table tennis is a world in itself and something she enjoys tremendously.

Mingarine’s love for sports goes back to almost 40 years ago when she would keenly follow gymnastics, swimming and running events in the Olympics on television.  She played center in the volleyball varsity team during her college sophomore year, and was part of her barangay’s volleyball team in Project 4, Quezon City for two years.

“I did not take my studies seriously. I even felt that school only served as a meeting place for me and my friends,” she laughingly recalls.  “I had numerous suitors way back then.”

Her father was a former medical supplies manufacturer, a field she was exposed to early so it was not surprising that Mingarine, the youngest of seven children, allowed herself to be persuaded to take up a course related to medicine.

“I had no idea what Medical Technology was all about. But later, I got interested in learning about bacteria, microorganisms and how to prevent diseases,” she recalls.

She had just about settled into her career choice and was looking forward to a rosy future when a growing pain in her right leg turned her life around during her junior year in college.

“There wasn’t a lump yet, but I could feel excruciating pain inside my right leg,” she recalls. “At first, I thought it was only pain from a bruise or a pulled muscle, but next thing I knew, a painful mass started to grow inside,” she explains.

It was bone cancer, and it took a heavy toll on Mingarine. Pain killers became a once-a-day habit up to a month leading up to her operation in September 1989.

“I only had six units left before my last year in college,” she recounts. But since she had to recuperate for a year while undergoing chemotherapy, she had to postpone her undergraduate degree at De Ocampo Memorial College until 1991. She eventually opted not to finish her course.

Mingarine confesses that initially, she couldn’t accept the reality of having her right leg amputated.  “At the time, I felt that it was better to die. I didn’t want my loved ones to be ashamed of me for being stuck in this condition.”

Eventually, though, she was persuaded to undergo surgery.  “My family was worried that the cancer cells would spread. They wanted me to have my right leg amputated so I could be with them longer.”

An older brother who worked as a seafarer funded her fiberglass artificial leg in 1991, but depression set in while she waited for the leg fitting. She would lock herself in her room, wanting to seclude herself from the outside world.

“I used to be the joker among my friends. But after the operation, I couldn’t assume that role anymore. I would have come off as plastic then,” Mingarine shares.

Having finally accepted that she couldn’t live her long-term goals, she only hoped for one thing: to walk alone without the help of a cane and other people.

“I kept thinking that I could go back to normal to expedite my recovery,” she shares. This meant finding employment so she could be occupied and productive.

Mingarine worked in the treasury department of the non-government organization Tahanang Walang Hagdan (TWH) for two years. It was here where its former GM, Jesus Jose E. Docot, took note of how she took her condition in stride.

“She’s really hard working and not at all ashamed of her leg stump,” he recalls.

In 2003, she learned from husband Juanito Mingarine, who was already competing in wheelchair racing, that the athletics team was holding try-outs at the PhilSports Arena for the upcoming Asean ParaGames in Vietnam. After training for three months, she bagged two bronze medals for javelin and shot put.

Two years after, she qualified for a slot in the national table tennis team.  She won two silver medals on doubles and team Class 8, and three third place finishes in individual and open class. She also took home two golds for doubles and open team event, and one bronze for individual event during the January 2008 ASEAN ParaGames held in Thailand.

Mingarine’s 6-10 p.m. training at the Amoranto Stadium brought her one second podium finish for doubles and one bronze medal for individual event during the 2009 ASEAN ParaGames in Malaysia.  To date, she has amassed a total of two golds, three silvers and seven bronzes throughout her career in table tennis and athletics.

“There are so many good table tennis players that are why I’m always stuck on bronze!” she says candidly, explaining her performance in the individual category.  While she’s already qualified for the table tennis team in 2011, she says she still wants to try out for the bowling team.

“I love challenges. Once I’ve convinced myself that I can do a certain activity, I immediately undertake a new endeavor,” the medalist says with conviction.

This was the gung-ho spirit that pushed Mingarine to register for the first Philippine Wheelchair Ballroom Dancing Competition in December 2008, two months after her first brush with ballroom dancing in a workshop sponsored by the TWH.  There was a joint celebration in their home after the tilt as she and her husband bagged first places in the women’s and men’s categories, respectively.

Her ballroom dancing gig opened the doors for her to strut her stuff on TV shows like ABS-CBN’s magazine show “Rated K,” ABC 5’s “Shall We Dance?” and UNTV’s “The Morning Show.”

Currently, the Rumba and Jive aficionado is a stay-at-home mom to three children, while taking care of their bedspace business.  Fatima, her 12-year-old daughter, says bonding time with mom is usually spent singing. The high school freshman, who has already joined talent search programs on local TV, cites her mother as her singing coach.

“I got my talent in singing, my talkative nature and most especially, my beautiful genes from my mother!” says the girl proudly. Mingarine used to be a choir member for their Sunday service in Project 4 two years before her surgery.

While her condition has helped her mature and see things in a brighter light, Mingarine can’t help but reflect wistfully on the opportunities she had to forego.

“I lost a lot of opportunities. For instance, I really wanted to finish my college education but I chose to put myself under rehabilitation first. I wanted to apply as a medical technology practitioner in America but I had to give that up too,” she says.  “Still, I make sure that I encounter mainly positive vibes. I’ll only call myself a loser if I entertain negativity in my life.”

Docot notes, “Although I don’t really meddle in other people’s affairs, I can see that Mingarine is not complaining about her condition. There’s no trace of regret in her life.”

It’s all a matter of faith, she says.  “I’m not really a religious person, but I always ask the Lord for help every time I feel my faith is wearing thin.”