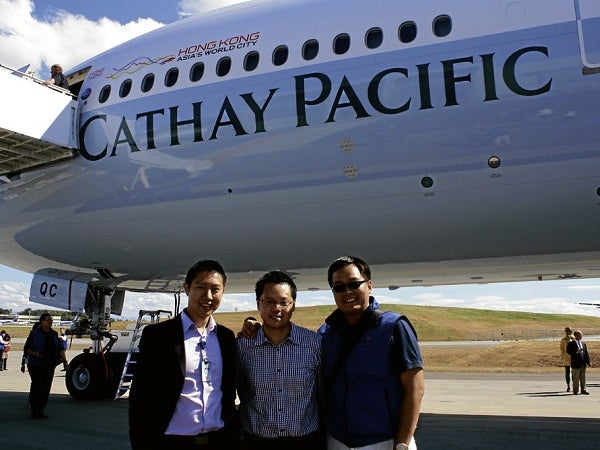 Now, flying economy can be a class act

Its newest aircraft has the much-talked-about Premium Economy Class (PEY), Cathay’s offering to its loyal passengers who prefer to fly economy class but eager to experience the comfort and service of  business class.

PEY is an additional chic seats located in between  business and economy zones. It’s a breakthrough for travelers who want to feel extra special without having to burn a hole in their pockets.

With PEY, there’s no need to endure a long flight in a cramped economy class. PEY offers a quieter, more spacious living space in a separate cabin with only 26 or 34 seats per aircraft.  The seat pitch is 38 inches—six inches more than economy class—and the well-cushioned seat itself is wider and has a bigger recline.

PEY seat allows passengers to tilt back their seats without disturbing passengers seated behind them. The eight inches of recline make resting and sleeping easy and gentle. Even the head and neck support can also be tilted at different angles for a more comfy rest.

The in-seat multi-port connector allows passengers to stream audio and video from personal devices to the 10.6-inch widescreen personal television with a noise-canceling headset. About hundreds of selections—current movies, TV shows, games etc.—on the StudioCX in-flight entertainment system are available.

All PEY passengers get collectible amenity kits from home-grown HK brand GOD (Goods of Desire) with dental kit, socks, eyeshade and earplugs for use during the journey.

But more than introducing a totally new seat and entertainment system on air, Cathay has also fashioned a total customer experience to make it more special for its PEY clients—on the ground.

There’ll be priority check-ins at specific counters for PEY, priority boarding before economy class passengers, and an increase in baggage allowance from 20 kg to 25 kg or two pieces of baggage from 23 kg to 25 kg each.

We recently had the privilege to experience the luxurious PEY. We joined the delivery flight of Boeing 777-300ER (Extended Range) that took off from the Boeing mega factory in Everett, Seattle, and flew to HK.

A simple turnover ceremony between Boeing and Cathay officials was held before B777-300ER rolled out of the factory and got off the Everett runway with Captain Colin Couch in the cockpit.

The aircraft wasn’t a commercial flight yet till we,  with other journalists from South Africa, Dubai and the US, Cathay executives, its business partners and friends, reached HK. There, regular passengers boarded the new aircraft.

Once on board, we felt good catching the spanking clean, airy and new car-like smell of the newly acquired aircraft.

We were welcomed with a glass of champagne, handed a saucer of mixed nuts and given a tour of the aircraft—from the business class with the new herringbone-design flat-bed seats and PEY cabin to the economy section, the cabin crew’s sleeping nook on the second level at the back of the plane and the pilot’s rest area near the cockpit.

Then came the premium treatment—a bottle of water, additional snack choices that include more cashew and macadamia nuts, a dinner of seared fillet of sea bass with lemon dill tarragon caper sauce, and a black cotton pajama set from Shanghai Tang that we wore for the entire flight. The pajama set, however, is given only to first-class passengers but Cathay wanted us to feel extra special during the journey. (Just for the record, B777-300ER has no first class, only business, PEY and economy.)

The flight was smooth and easy. There was enough legroom and distance between the seat in front and the one behind you. The three-position footrest even helped us find a variety of positions we need to stretch our tired legs.

Air travel has indeed gone a long way. Cathay, widely acknowledged to be one of the best in the world, has exerted all efforts and spent millions to improve ground and air services and amenities to keep up with today’s lifestyle.

“People have been asking whether PEY would encourage passengers to downgrade from business class to economy,” said Chan. “But, we don’t actually see it that way. In fact, we are encouraging people traveling from economy class to premium economy. We already get positive feedback on PEY from those taking long flights to, like, London, San Francisco and Johannesburg.”

According to Chan, CX has a total aircraft order of 99 to be delivered by 2020 with a value of almost HK$215.7 billion. CX is investing more than HK$3 billion in products (including new business/PEY/economy seats etc.) and in service enhancements.

“We’ve been in the business for quite a long time,” said John R. Slosar, Cathay’s chief executive officer. “Normally we don’t introduce a product unless we are very sure that we make something good out of it.”

He added: “There’s a segment of passengers who would be glad to pay more for better seats and ample space, but don’t want to go business class because it’s quite expensive, but they’re happy to pay a bit more than economy.”

PEY’s target market are  economy passengers who would like to upgrade and get better experience but still economy sort of price level.

“What excites me on this plane is that it can fly anywhere nonstop,” said Slosar. “We fly 16 hours New York and Los Angeles and back to anywhere in Europe. It allows us to serve anywhere in such a modern way with great seats, great crew rest, advanced technology. It works for everybody.”