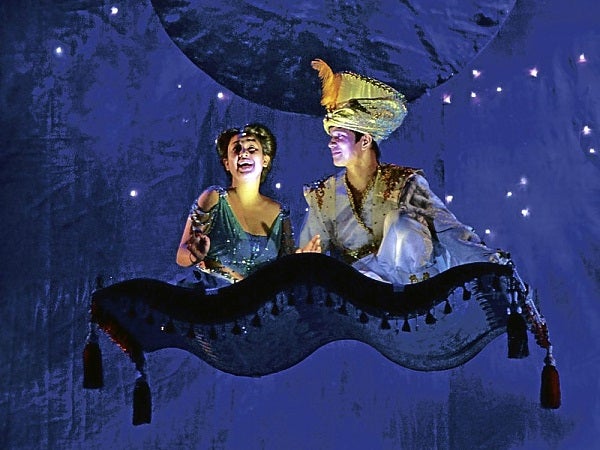 When Disney’s “Aladdin” first opened in Philippine cinemas in the summer of 1993, I dragged my brother to watch—but not before slipping my big Aladdin pin, a treasured pasalubong from an aunt who had gone to Disneyland, inside the right pocket of my jeans.

In the dim cinema, I found myself enthralled by the magical world of flying carpets and powerful genies—until a piercing pain hit me. While I was getting lost in Aladdin’s world, my beloved pin had somehow gotten unhinged, puncturing my jeans and my fleshy 12-year-old thigh.

And so 19 years later, as I set off to watch Atlantis Productions’ staging of “Disney’s Aladdin” at the Meralco Theater, I made sure my pockets were free of sharp objects.

After the show’s world premiere at Seattle’s 5th Avenue Theatre last year, Atlantis Productions was handpicked by Disney Theatricals to be the first theater company to stage it in Asia. “Aladdin” is Atlantis’ third Disney musical; it staged successful productions of Disney’s “Beauty and the Beast” in 2005 and “The Little Mermaid” last year.

Directed by Bobby Garcia and Chari Arespacochaga, “Disney’s Aladdin” is a kid-friendly retelling of the Middle Eastern folk tale about a poor but street-smart boy whose life is changed by a magic lamp.

The first scene set the tone for the entire musical. The minute we saw Aladdin’s friends riding those goofy-looking camels, we knew we were in for a fun, light-hearted romp.

Soon we were transported to Agrabah, where the Sultan (Jun Ofrasio) is hoping his daughter, Princess Jasmine (K-La Rivera), would finally choose from her suitors, while the street urchin Aladdin is dreaming of changing his ways and making his mother proud.

The production deviates from the film in a number of ways. Abu, Aladdin’s kleptomaniac monkey, is absent and in his place are the perennially hungry Babkak (Bibo Reyes), the loyal but easily unnerved Omar (Johann Dela Fuente, who is also in charge of hair and makeup design) and the ambitious but cynical Kassim (Jamie Wilson), Aladdin’s comical trio of friends-slash-fellow band members who also double as the show’s narrators.

Reyes, Dela Fuente and Wilson enjoyed playing their characters, and it showed. They provided comic relief during tense moments, and, judging by the loud chortling from the kids that packed the theater, they were always a welcome sight for the audience. Iago (Jimmy Marquez), the villain Jafar’s sidekick, is no longer a parrot. He is now very human, and very funny, thanks to Marquez’s portrayal.

Aladdin fans will be happy to know that the musical makes good use of the memorable Oscar-winning tunes from the film, mixing them with songs that had been written for but cut from the movie (“Proud of Your Boy,” “High Adventure,” “Omar, Babkak, Aladdin, Kassim”) and some new numbers, from the award-winning songwriting team of Alan Menken, Howard Ashman, Tim Rice and lyricist Chad Beguelin who wrote the book for the musical.

The orchestra, led by musical director Ceejay Javier, did a great job. The sound was so full and rich, we couldn’t help but be swept by it. We bobbed our heads and tapped our feet in time with the music. (“Arabian Nights” is still stuck in our heads.)

Choreographer Cecile Martinez did wonderful work too; the chase scene during “One Jump Ahead” was delightful to watch. And the choreography worked extra well because of the remarkable efforts of set designer Lex Marcos and lighting designer Jay Aranda, who took us from the streets to the Cave of Wonders to the palace with their deft touches.

And it’s not just the music, the set and the choreography. “Aladdin” succeeds with its brilliant casting choices.

Aiza Seguerra (who alternates with Calvin Millado) was hilarious as the fast-talking Genie; not even the wailing kid in the audience put a damper on her performance.

Raul Montesa was so effective as the evil Jafar that some children booed him during curtain call.

K-La Rivera, who only made her theater debut last year in Atlantis Productions’ “In The Heights,” was a headstrong and stubborn Princess Jasmine, with a beautiful voice to match.

But the show’s big revelation was Tom Rodriguez. We have to admit, we had our apprehensions about the casting. After all, the last time we saw Rodriguez was on the big screen, in Chris Martinez’s 2010 hit comedy “Here Comes The Bride,” where he was understandably overshadowed by his more experienced costars Eugene Domingo, Angelica Panganiban and Jaime Fabregas.

But in “Aladdin”, he shines in the lead role. Likeable and charming, he will make you fall in love with Aladdin. His vocal skills were a surprise; he sounded just like a Disney prince. Whatever he lacked in experience he made up for with endearing earnestness.

In the program, he thanked his directors “for gambling on an Arizona farm boy with no theatre experience.” We thank them, too.

The much-anticipated magic carpet scene did not disappoint. We felt like kids again as we watched Aladdin and Jasmine fly against a backdrop of fake but beautiful stars, our mouths agape and our arms full of goosebumps. (The show’s poster credits the flying to Foy; Foy, whoever, whatever you are, you rock.)

Actually, that sums up our entire Aladdin experience: we felt like kids again while watching the show. We were smiling practically the entire time (our mouths actually started to hurt), we laughed gleefully, we clapped our hands. And yes, we’ll admit it, we kind of booed Jafar, too.

Not that the musical didn’t have its emotional moments, either. Rodriguez’s performance of “Proud of Your Boy” was stirring, Genie’s desire to be free tugged on our hearts and the romance between Jasmine and Aladdin had us rooting for love. To quote Genie, “I just love a happy ending.”

“Disney’s Aladdin” was a fresh take on a beloved tale, a colorful musical spectacle that offers fun and laughs for both children and adults.

For over two hours, I was once again that 12-year-old with the Aladdin pin in her pocket. That I did not shed blood to enjoy this production was merely a bonus.