Her acting may be dramatic, but her interior decorating style is subtle | Lifestyle.INQ ❮ ❯ 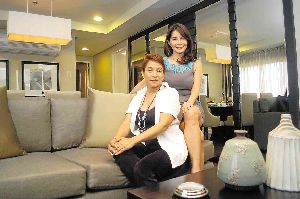 Her acting may be dramatic, but her interior decorating style is subtle

FOR HER most recent project, actress, interior decorator and aspiring interior designer Carmi Martin did a two-bedroom condo unit at the Fort in Taguig. Like in many of her previous projects, Martin went for a crisp, clean hotel room look that revolved around the unit’s grayish green walls and white ceiling. 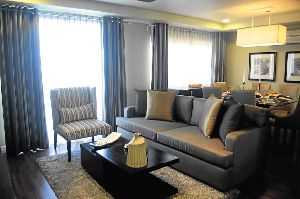 Mannylin Peña and husband Olan bought the unit some time last year. The family’s conjugal home is in Las Piñas, but since Olan works in Makati, the couple felt the need for a halfway house near the financial district. Since they wanted to move in immediately, they requested Martin not to touch the unit’s existing walls and ceilings.

Except for a few minor additions, such as a series of mirrored panels on one of the walls, drop lighting in the living room, and additional pin lights in several strategic areas, Martin hardly touched the unit, including the tiled flooring.

Apart from maximizing the space, she focused on choosing the right accent and furniture pieces. She also paid close attention to the color scheme, as seen in the curtains, upholstery and bed linens.

Martin also took into consideration the family’s lifestyle. Since they’re a tightly knit family, she imagined it as a venue for intimate and casual gatherings. And she was right.

“It can be quite limiting to work around an existing color scheme,” Martin admits. “But at the same, I also view it as a challenge.”

And since Olan would be using the unit most of the time, Mannylin requested Martin to come up with more masculine yet “genderless” interiors.

Although Martin has done a number of houses with more elaborate themes and interiors, she considers herself more at home doing condo units with the so-called hotel room look. Since obtaining a certificate course in interior design at the Philippine School of Interior Design (PSID) a few years ago, Martin and her collaborators have done 25 projects to date (visit www.martininteriorsph.com). 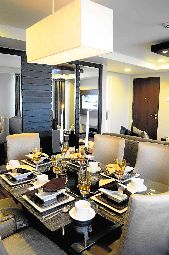 The master bedroom, for instance, is a play on such hues as gold, beige and grayish green, as reflected on accent pillows, curtains and duvets. The same color scheme, although a bit darker and with additional shades, is echoed in the living room.

Strong colors like red, orange, and yellow had no place in the setup. Instead, Martin went for wenge, in the form of wooden furniture pieces, wall treatments, and a drop ceiling accent to unify the entire color scheme.

Except for a few paintings from Mannylin’s personal collection that now hang by the den-cum-guestroom, Martin sourced almost everything, including several framed abstract prints in autumn hues, which now hang in the master bedroom. 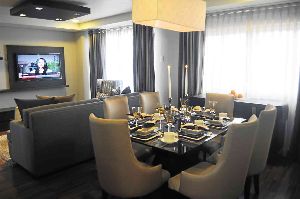 Mannylin was impressed with Martin’s taste as well as her attention to detail. When she saw the finished product some time later, she understood why none of her paintings made the cut. At the same time, Martin was also receptive to Mannylin’s suggestions.

“Since living areas aren’t that big, I purposely avoided using strong colors and bulky furniture pieces,” says Martin. “For instance, I was thinking of using a four-poster bed in the master bedroom, but Mannylin rejected the idea. When I saw the space for myself, I understood why.”

She also considered putting a walled mirror by the dining area. It would have been an ideal focal point, she says, when family members and guests enter the unit. But doing so would mean moving the split-type air-conditioning unit that came with the place. The couple nixed the idea for fear that it would cause more delay.

Instead, Martin worked on a different, bigger wall spanning the side of the dining area and portion of the living room, the same wall lining the corridor leading to the two bedrooms. Using one huge mirror would have made the place look like a gym, she says.

“Mannylin told me that she once saw a series of mirrored panels interspersed with wood in a hotel, and I immediately understood what she meant,” Martin adds. 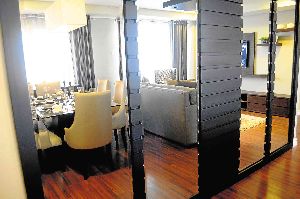 She cut the mirror into several sections, with wood in between. The series of mirrors now reflects the dining area’s main focal point, which is decidedly the rectangular glass-topped table with room for six padded chairs.

Apart from doing “My Lover, My Wife,” an afternoon soap on GMA 7, Martin will also be seen in Star Cinema’s “In the Name of Love,” a feature film starring Aga Muhlach and Angel Locsin.

“Acting in front of the cameras is still my first love,” she says, “but at the same time, I also find creative fulfillment doing interiors. I really enjoy helping people find creative solutions to their needs.” 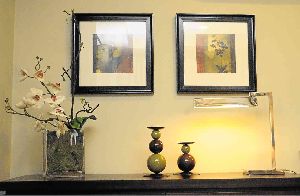 Upon the encouragement of friends, Martin is completing her college education at the Philippine Women’s University (PWU). Since she already finished most of her major subjects at PSID, she’s now busy attending to a number of minor subjects at PWU.

“I was fresh out of high school when I entered show biz,” she says. “Hopefully, by September I will get to finish college and take the board exams for interior designers in October.”