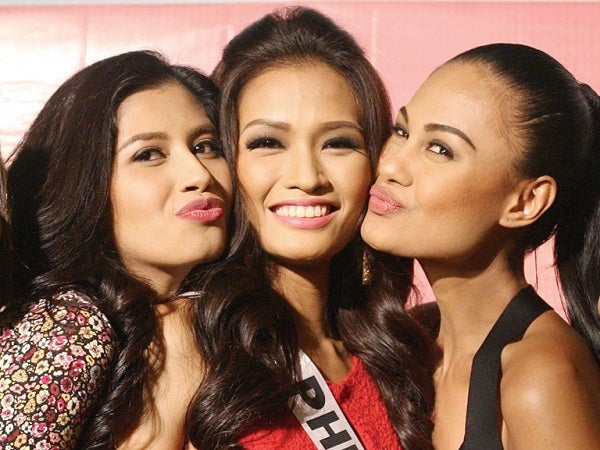 Pageants are more fun in the Philippines!

The Philippines has twice hosted the Miss Universe pageant—in 1974 and 1994. Since they were spaced 20 years apart, one wonders if the Department of Tourism would be keen on bringing the event here in 2014.

For sure, there is the primary concern: Will the investment be worth it? It’s hard to tell if a bevy of beautiful women is enough to entice tourists into descending on our islands. And yep, there’s a feminist-unpleasant ring to that statement.

The Philippines was the first country to have brought the event to Asia. In 1973, Margarita Moran won the Miss Universe in Athens, Greece, and the Cultural Center of the Philippines, under First Lady Imelda Marcos, had a grand vision: To construct a world-class facility for arts and culture. Only the National Theater had been constructed then; the Folk Arts Theater, the slated venue for the pageant, had to be built in a record 77 days. Besides, the country was into its second year under Martial Law and the public had to be entertained. The fact that the event was to be broadcast all over the world was another coup: The Marcoses needed to show off their glorious version of the Philippines after all.

The second staging of Miss Universe in Manila was under better conditions: Democracy had been restored and the country was touted as one of the economic cubs of Asia, never mind that it was mired in daily power shortages.

It was the show that made “Mabuhay” an international buzzword, becoming the identity greeting for Filipinos, after it was used as the theme for the opening song number. The event also produced romance, with pair-ups such as those of Ogie Alcasid, who served as tourist guide for the ladies, and Miss Australia Michelle Van Eimeren; and heartthrob Aga Muhlach and Miss Universe 1993 Dayanara Torres.

Of course, it wasn’t without its drama. Who would ever forget the immortal words of—bless her soul—Miss Mauritius Viveka Babajee, who with “Take it, take it” rocked Manila with an awards show scandal. (We are still waiting for the clip to show up on YouTube.)

The Philippines do not have the means to host the Olympics, the World Cup, or a Formula One circuit—at least not in the near future—but we sure can host a pageant successfully.

In this issue of Super, we present to you our Miss Universe wish list. This is our dream pageant—if our country gets to host Miss Universe again.

Instead of the usual auditorium or theater, we’d like to bring the pageant to Mt. Pinatubo. We think the lava walls would be a fantastic backdrop for the finals night.

Bruno Mars, Arnel Pineda, Gloc9, Apl de Ap, Jessica Sanchez, Nicole Scherzinger, Charice Pempengco, Jasmine Trias, Banig and Charlie Green (to sing their own version of “We Are The World”), and Jose Mari Chan (of course, he has to sing “Beautiful Girl”)

Ramon Bautista and Derek Ramsay. We’re serious. With Ramon’s confidence and Derek’s abs, we think they’d be able to handle almost a hundred gorgeous women together.

We asked two designers with different styles to create sketches of their version of the Miss Universe crown. Janina Dizon envisioned a beautiful 18k rose gold tiara with a stingray base, a velvet back and different colored diamonds. In the center of the tiara would be a 50-carat pear-shaped pink diamond. She said, “My idea is to make Miss Universe a type of superhero. Built of strong character, she is a champion of women’s rights. She is dedicated to protecting the public. She blazes the path using her femininity and poise all the while wearing her fabulous diamond tiara.”

Meanwhile, Noli Coronado and Dante Dizon, the crazy cool duo behind Lucky Monkey, created a crown made of pearls and silver. Dante said, “It features two tarsiers—a devil and an angel—and has a clam shell in the background amidst waves sitting atop a banner with the acronym of all the planets.”

We’d like graphic designer Isabel Gatuslao to create the logo. We think her classic and elegant touch will be a great fit for the pageant.

Carlos Celdran is our dream tour guide for the girls. We asked him where he’d like to take them. He said, “Intramuros. The story of our city all begins there.”