Classic and adventurous—as only Billy King can do | Lifestyle.INQ ❮ ❯ Classic and adventurous—as only Billy King can do “What the hell are you doing here?”

That was a common reaction to friends of chef William Anthony King when they learned he has restaurant in Alphaland.

To the hoi polloi, the building is synonymous with the MRT Magallanes exit and mass-market retail shops. King’s long history of casual elegant dining in high-end destinations seemed absurd in the new location.

In his typical optimism, he replied, “I’m Irish. There’s method in my madness.”

Last January, Roberto Ongpin, chair of Alphaland Corporation, presented King the opportunity to do business in his space. The sixth floor of Alphaland Southgate Tower has been dedicated to upmarket entertaining with two restaurants, a function room and conference area, a big ballroom and the adjacent open-air skytop called The Tents.

“This happened all of a sudden. I’m not one of those people who plan things. We had a few weeks’ notice. The restaurant was already here and they wanted someone to lease the place.”

Hence, the name The Alpha by Chef Billy King.

The events at The Tents were enough to keep the catering of Le Chef, his holding company, very busy. Meanwhile, The Alpha has been building its menu. 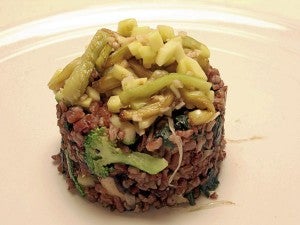 Unlike Le Chef at The Manor which has 130 dishes in its repertoire, The Alpha menu is trim at 30, yet these were the dishes that had endeared him to his loyal patrons.

Typical of his Gemini personality, the most memorable dishes are often prepared spontaneously and new dishes are introduced in the daily specials. Yet, the meals bear King’s trademark informality done with refinement.

“I love salads. I have lots of salad combinations. They’re very popular if people want a light lunch and dinner.”

Our first course was a healthy fruit salad with avocado and hummus. Apples julienne, mango bits sweet tomatoes and avocado were laden on shreds of romaine and iceberg lettuce.

“When you have nice salad ingredients, the iceberg cleanses the palate. I like its crunch,” he says.

It was usually stamped with King’s signature crispy but spicy pappadam, Indian crispy flatbread made of lentil flour for a sharp contrast. The salad was drizzled with creamy chickpea purée and sesame dressing. 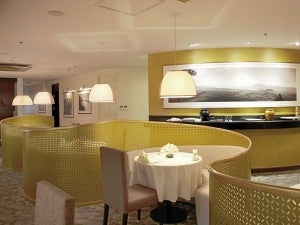 The Alpha’s official version is roasted prawns or grilled scallop with avocado and parmesan cheese and various dressings. “I eat it four days in a row,” he said.

The chilled gazpacho literally started with a bang. A hint of siling labuyo or chilli pepper gave it a bang, a welcome surprise for people who love spicy food. King always takes chilli pepper for breakfast and in the afternoon. It protects the heart, relieves congestion, soothes intestinal diseases, migraines and sinus headaches.

“I don’t take siling labuyo after 4 p.m. or else, I’d stay awake the whole night. I have zero hypertension, no tension or stress. I don’t believe in those things. What’s the point of worrying about something you have no control over?” he said.

As the chilli flavor dissipated, the coolness of the celery and yogurt and the sweetness of bell peppers set in. The olive oil, lemon and salt and pepper gave it more body. The gazpacho was tastier with freshly baked ciabatta bread drenched in it. The bread was done the classic way with its thick, golden brown crust and spongy and delicate center.

“It’s baked the old-fashioned way with very little action in the dough. You cut, set and handle a lot. It’s not so compressed or floury on top,” King explained.

Back in the ’80s, King introduced the risotto as a main course. The vegetarian version was a mound of Baguio red rice with bits of broccoli, zucchini, shitake mushroom, roasted aubergine, spinach and some fleshy green mango for subtle tartness.

The lunch ended with banana foster with a caramelized coating contrasted by the vanilla ice cream.

The menu includes some of King’s classics such as the sea bass in phyllo pastry with spinach, flavored with a mildly spicy vinaigrette dressing. “It’s very refreshing,” said the chef.

The restaurant also offers King’s trademark carpaccios, rendered the classic way. “I don’t know how anyone here can get a classic beef carpaccio the way we do it,” he said, referring to the finely sliced raw beef tenderloin. He also introduced salmon carpaccio to the local palate in the late ’80s. “It’s all about the temperature of the fish,” he said.

The menu highlights dishes that diners often describe as healthy and clean tasting—the salmon tartare, sprinkled with olive oil; the gentle flavor of the pan-fried Chilean Sea bass is enhanced with ginger saffron and spinach sauce.

The French rack of lamb in portwine rosemary jus and classic Herbes de Provence is luscious with fat trimmed and baked in high temperature with a siding of hot, crunchy potatoes and feta cheese salad.

Fans of King’s restaurants will always indulge themselves in his famous dessert soufflés which nowadays restaurants seldom make the effort to prepare. They are billowy and low in fat, made with egg whites, sugar, liqueur and filled with grand marnier, vanilla or chocolate.

Still, the crème brulée tops the list in popularity, what with its lush vanilla custard delicately topped with slightly crunchy brown sugar caramel and scented with vanilla. When it’s the season, he’d whip up surprises such as fresh strawberries laced with pink peppercorns and olive oil and raspberry vinaigrette. The saffron ice cream complemented the tartness.

“The menu is just a guideline. Some people come in and ask, ‘What do you have?’” said King. He has taught his staff the rudiments of his classic recipes and also how to whip up a meal instantly. While some restaurants will not customize their dishes,

The Alpha is flexible. “In some places, if you want a salad without the fish, they would say it’s not possible. We are flexible. They say, ‘I like this but can we combine with this one?’ Mystaff is brilliant.”

Through the years in the restaurant business, King still talks to his patrons and follows up if they are happy with their meal and if there is quality on the table. Sometimes, they ring him up asking if he’ll be there so that he could whip up a surprise themselves.

Clearly, the patrons of The Alpha are not the MRT-riding crowd. On that lunch day, columnist Aida Sevilla Mendoza, social entrepreneur Michelle Ongpin, the scion of a taipan and polo player-photographer Bengy Toda were sighted. Toda ordered the classic surf and turf, 100 gram portions each of steak and prawns and a fresh mushroom soup, made of fresh purée, vegetable stock and garlic oil.

King admits the restaurant could still do some fine tuning to meet his exacting standards. Still, loyal patrons keep coming back.

“It’s better to start simple and go up rather than start great and go backwards,” he said.