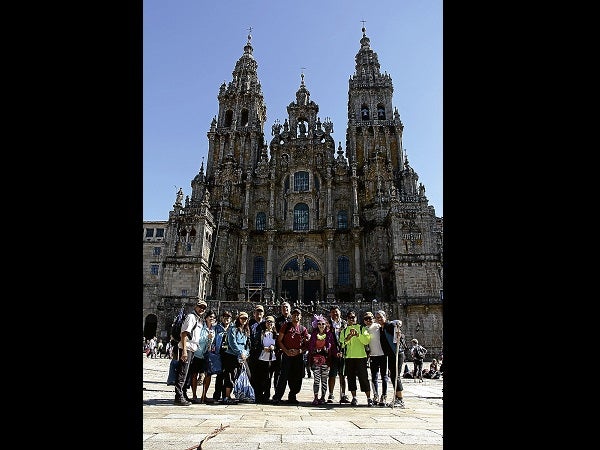 Camino de Santiago de Compostela was not originally on my bucket list, but after completing the pilgrimage earlier this year, it’s an item I would heartily suggest that you add to yours.

The Camino de Santiago dates back over a thousand years. It is a network of ancient pilgrim routes stretching across Europe and coming together at the tomb of St. James. Legend holds that the apostle’s remains were carried by boat from Jerusalem to Spain and interred in what is now the city of Santiago de Compostela.

Also known as The Way of St. James, the Camino can take one of many routes to Santiago de Compostela. During the Middle Ages, the route was highly traveled. However, the Black Death, the Protestant Reformation and political unrest in 16th-century Europe led to its decline. By the 1980s, only a few pilgrims per year were arriving in Santiago.

Things changed in 1987, when the Council of Europe declared Camino as the first European Cultural Route, and Unesco named it a World Heritage Site. Today, thousands of modern-day pilgrims from around the world walk The Way.

I first visited Santiago Cathedral in the Jubilee Year 2004, as we toured Spain following the wedding of my cousin Margaret Carpo to Javier Salazar. Even then, I could feel the solemn energy inside.

Early this year, Margaret invited the family back for a pilgrimage. Most tourists average a hundred-kilometer walk, while the truly athletically devout can opt for the full 780 km starting from Biarritz, France. We decided on a 160-km route starting in Bilbao.

While in Bilbao, the first order of business was, of course, dropping by El Corte Ingles, the department store. We also took time to see the Guggenheim Museum, but I’m sure you can all appreciate that we took more time shopping.

The entire walk took us one week, from the border of Castilla y La Mancha into Galicia, the final portion of the pilgrimage. We walked a moderate 20-30 km each day, spending six to eight hours traversing the beautiful Spanish countryside and stopping in various albergue, or inns, along The Way.

It is interesting to note that walking so much is more painful than running a 42K marathon. My main challenges were waking up in the morning and traveling light, two traits I do not possess. Marge and Javi had even given each of us a suggested packing list, focusing on bare essentials and recognizing that laundry services are available in each inn.

Ah, my poor, Spain-based cousins hardly know me. I found luggage space by bringing along a porter, my son Bryan Prieto, whose luggage allowance I used to achieve a complete new look every day.

A note to those planning the trip—invest in good hiking boots with ankle support. Running shoes are not up to the rugged terrain. Remember: The rain in Spain is a major pain.

Our first two days of walking were in pouring rain, so we bought heavy-duty ponchos to shield ourselves. Our walking sticks were soaked but helpful on the rough paths up the hills.

Beauty essentials aside from sunscreens, foot lotion, sunglasses, hat and cologne had to include painkillers, blister medicine, muscle relaxant and anti-inflammatory medicine. Marge taught us how to use needle and thread for blisters. Thread the needle and run through the blister, leaving a bit of thread inside to drain the blister.

Each day was broken down into the morning to midday walk, a stop for lunch along the route, and wrapping up the rest of the kilometers to reach the next town. We all walked at various paces, covering our own distances; the others did alternative routes and shorter coverage with the aid of Javi and our luggage van. We all just met for dinner at the town inn with stories to share.

Unlike most pilgrims carrying all of their belongings with them in a backpack, we opted for the luxury of a support van that transported our luggage from one town to the next. It was difficult enough to walk all those kilometers with a small backpack for just my makeup and camera.

Along the route, round stone houses with conical thatched roofs, farms with grazing cows, and lush forests provided incredible scenery. We were rewarded with hot dinner meals and lots of Spanish wine in the evening. Cousin-in-law Frankie Barandiaran introduced all of us to Basque-themed tapas, making sure the trip was a foodie experience as well.

Our room accommodations were varied, allowing us to experience different styles of living quarters ranging from small palaces to farm homes converted into inns, and to albergue with dorm-style rooms. We had many funny incidents, such as cousins Tissa Tan, Isabel Barandiaran and Farah Imperial climbing up and down bunk beds while in the men’s quarters,  various “interactive” evenings of snoring and sleep-talking.

In order to receive the Compostela, pilgrims must, at a minimum, complete the last hundred kilometers, carrying a Pilgrim’s Passport that is stamped on a daily basis. Once we reached Santiago, we registered at the Pilgrim’s Office and proudly received our Compostela.

On Sunday, Sept. 30, we all attended the Pilgrim Mass at Santiago Cathedral. Feeling extremely happy and blessed, we reminisced on the journey we all shared. We all felt closer, and many talked about how they got to know their children better, like my cousin Marisun Uichico and her son, Timothy.

For all the different intentions and prayers we all shared, we will have those unforgettable, fond memories forever. The terrain could not have been too steep with the prayers, the conversations and laughter we had along the way.

After a pilgrimage, there is no recovery more effective than a stop in Paris. From hiking boots to high-heel shoes in a huff! But that’s a completely separate item on my bucket list, so I’ll reserve that story for another day.