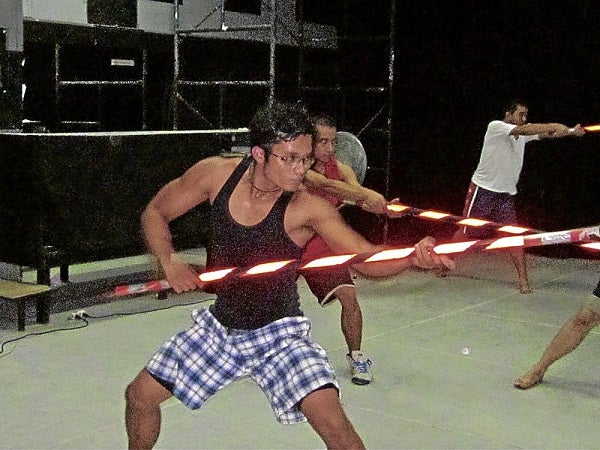 The epic of Bicolandia, “Ibalong,” is a mélange of fantastic stories with three heroes—Baltog, Handyong and Bantong—who got to battle against the elements, one-eyed monsters, giant flying sharks, crocodiles as big as boats, and other such fearful creatures.

Perhaps the greatest hero of Ibalong, the old name of Bicol, was Handyong, who went on to build a town in an area called Ligmanan. Handyong was a wise leader, and his town flourished. The people planted rice which they named after the chieftain. Under his rule, masters and slaves were treated equally.

It is the story of Handyong which the forthcoming production of Tanghalang Pilipino, “Ibalong,” a dance-drama-musical, will focus on, bringing together stellar talents from the performing arts.

The stage adaptation is by Rody Vera, with music by Carol Bello and her Encantada band, and choreography by Alden Lugnasan. Production design is by Leeroy New, and Katsch Catoy is lighting designer. Tuxqs Rutaquio directs.

“Ibalong” goes on stage at the Cultural Center of the Philippines’ Aurelio V. Tolentino Theater for three weekends from Feb. 8-March 3, 8 p.m. on Fridays, 3 p.m. and 8 p.m. on Saturdays, and 3 p.m. on Sundays.

Handyong will be played by goodlooking and hunky Remus J. Villanueva, 26, who joined TP’s Actors Company only last year and is a mass communication graduate from San Beda College-Alabang. This is his first starring role.

The alternate is another talented hunk, Myke Salomon, who was a hit in Peta’s “Care Divas” and Atlantis Productions’ “Aida.”

For Villanueva, Handyong as interpreted by Vera “is actually the epitome of pride when it comes to ruling Ibalong. He wants to take charge and conquer. Rody wants to impart something else, different from other productions, not just the hero but kung anong natutunan ni Handyong (what Handyong learned). The play is very timely.”

The other major characters are Oryol (Jenine Desiderio of “Miss Saigon” fame) a serpent who, like the sirens in The Odyssey, uses her beautiful voice to captivate men; Gugurang (May Bayot), God of the Heavens; Aswang (Jonathan Tadioan), God of the Underworld and the father of Oyrol; and Rabot (Marco Viaña), a blind serpent whose stare can turn you to stone.

Rabot and Oyrol were an item, but somehow the match did not materialize.

Delphine Buencamino is understudy to Desiderio.

“Ibalong is not known to all so we are making it more marketable to young people,” observes Rutaquio. “We settled more on the mythical features and the costumes will invite more audiences. So it is a spectacle, with stunts and costumes that are visually appealing.”

The music is neoethnic with a tinge of rock, but also “may pagka-spiritual ang attack ni Carol, especially for Oyrol,” the director says. The halimaws (monsters), with their headdresses made of resin, serve as the Greek chorus, and the arias are chant-like.

“We are also focusing on the environment, on how we are destroying the forests,” Rutaquio adds.

At the end Handyong dies, so as to eradicate all the halimaws. He who had created a civilization and wanted to conquer the heavens is struck by lightning and expires. It is a sacrifice on his part, to give way to his son Makusog (Cheeno Macaraig). And so the legacy continues.

The triumphant coda is a vision of Daraga Magayon (the beautiful) rising, leading to a change in the landscape of the region and the creation of majestic Mt. Mayon. And the real saga of Bicolandia will begin.