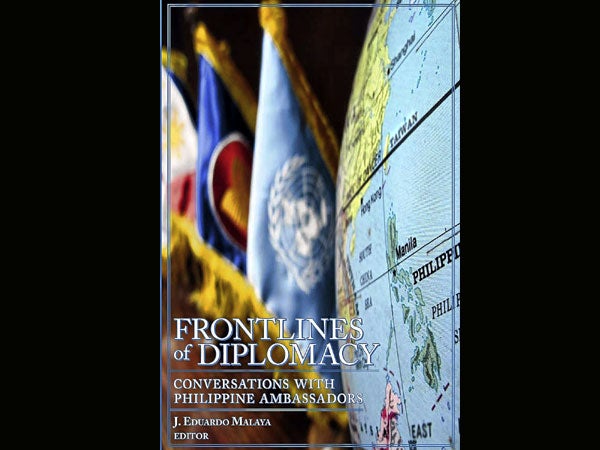 Journeying to a far-off country to represent the Philippines is among the most rarefied of Filipino ambitions. These are the life and times of the Foreign Service Officers or FSOs, those who dream of and are working towards a career in diplomacy and international relations.

This dream achieves its most recognized and most accomplished form in the Philippine ambassadors. Though the ambassadors essentially hold the same positions, they are distinct from one another, with personalities as varied as the shapes of the territories they are assigned to.

This is one of the first and most emphatic points made by the new anthology “Frontlines of Diplomacy: Conversations with Philippine Ambassadors,” edited by foreign affairs undersecretary J. Eduardo Malaya and published by Anvil. The book gathers the collective experiences of 37 ambassadors and some of their spouses through interviews conducted by younger FSOs. Through these experiences and the queries of the interviewers, readers get a glimpse of the eventful lives of ambassadors as well as catch a bit of the constantly developing life of a career FSO.

The meatiest portion of “Frontlines” features the day-to-day affairs of the ambassadors’ offices, everything from hosting dinners to helping troubled Overseas Filipino Workers (OFWs).

But “Frontlines” also devotes ample space to different significant international agreements, such as issues relating to the Asean or the United Nations—for example, Lauro L. Baja discussing UN Resolution 1546, which set forward political transition in Iraq, or Leticia Ramos-Shahani protecting women worldwide by championing the Nairobi Conference. China is a constant concern, while the United States has always been an interested party. Here we can see the long, often complicated process of getting consensus or agreement from other nations, something that anyone interested in political science would find very useful.

However, it’s the unexpected details that engage the casual reader. Baja, the country’s Permanent Representative to the UN, speaks of the effectiveness of employing humor during discussions: “We were fortunate to be able to make use of humor, but I was also hesitant not to have too much humor because we might be accused of being a joke. I used it sparingly and only when the occasion warranted it.”

Diplomatic spouse Ada Ledesma-Mabilangan goes into interesting detail about how Filipinos can entertain and host gatherings in a unique way, and explains some elements of hosting etiquette: “In terms of seating arrangement, the rule is that you place the most important male guest to the right of the hostess and the most important female guest to the right of the host. But our culture gives special honor to our older relatives. No matter if you’re the president, your father or mother is in the place of honor in the privacy of your home.”

On a different note, Jose Macario Laurel IV expounds on the importance of golf in diplomacy: “There are many ways to deal with people. With golf, you tie down a fellow for five hours. Walang lusot (There is no escape). The only other sport that I think is better is hunting. When you go hunting, you share a camp with a guy, you eat with the guy, and you hunt with the guy. I used to be a hunter. That’s the advantage. You have a ‘captured’ audience. Just like in golf, but only for a shorter period.”

There are also some gripping, urgent incidents such as what happened to Leonides T. Caday, then serving as ambassador to Indonesia in 2000, when his car was hit by a car bomb planted by the Islamic extremist group Jemaah Islamiyah outside the Philippine Embassy in Jakarta. “I was the first victim of international terrorism in Jakarta,” Caday says, explaining that at the time, the Philippine government was rounding up foreign militants and was waging then-President Joseph Estrada’s all-out war versus Mindanao’s Islamist militants. “I was vulnerable. I thought that I had no enemies. That’s the reason why they targeted me.”

There is also the experience of Clemencio F. Montesa in Nicaragua in 1996. Montesa was at the foreign ministry in Managua when rebels occupied the building and held him hostage for nine hours. When allowed a precious phone call, Montesa called his wife: “I called my wife in Mexico City and told her that in about 30 minutes or an hour, she might see me on CNN and BBC. ‘Do not be scared, I am telling you… ako ngayon ay bihag ng mga rebelde pero huwag kang matakot sapagkat ako ay ligtas (I am a captive of the rebels but don’t be afraid because I am safe).” Fortunately, Montesa was freed unscathed.

It is not all danger and tension. There are fascinating tales surrounding the origins of the DFA itself, as well as truly original characters, such as staff   that were there from the beginning. Nicasio G. Valderrama, for example, came on board as a stenographer in 1946. He would go on to serve as ambassador to Pakistan, among other postings. As an expert violinist, Valderrama would play Filipino songs during diplomatic functions and Filipino holidays. He offers this word of advice to aspiring FSOs: “Get to know your country better. When you go abroad, make sure that you are well-versed about anything under the sun that may be used to criticize the Philippines so you will know how to answer. You have to hone your writing ability because that’s the language of diplomacy. Learn as many languages as you can. If you can learn as many languages as you can, you will be another Jose Rizal.”

From the exchanges between veteran FSOs and their younger colleagues, we can see the evolution of the Filipino diplomat; its past, present and future.

“Frontlines” is a must-read for anyone aspiring to foreign service, even as it is a valuable resource for historians and political scientists.

Seen through the book’s perspective, the ambassadors then are clearly men and women who have been tasked to represent the Philippines even as their mission is often viewed through the individual ambassador’s personal filters. “It is often perceived that foreign policy decisions are made in the nations’ capitals and then conveyed as instructions to the ambassadors and their staff in the field. All the latter is supposedly tasked to do is to carry them out,” Malaya, now assigned in the Philippine Embassy in Malaysia, writes in his preface. “As manifested in these succeeding pages, diplomats enjoy ample autonomy and discretion in carrying out their mandates.”

This is the fact demonstrated by “Frontlines of Diplomacy,” that these are Filipino civil servants whom we have rightfully trusted in their international mission. “The more successful ones in accomplishing their mission are those who inquire into the whys and wherefores of the policies to be pursued, creatively deploy the resources at hand, and make their moves at the most opportune time,” Malaya concludes. “There is room for initiative, creativity and judgment in the formal, opaque world of diplomacy.” •