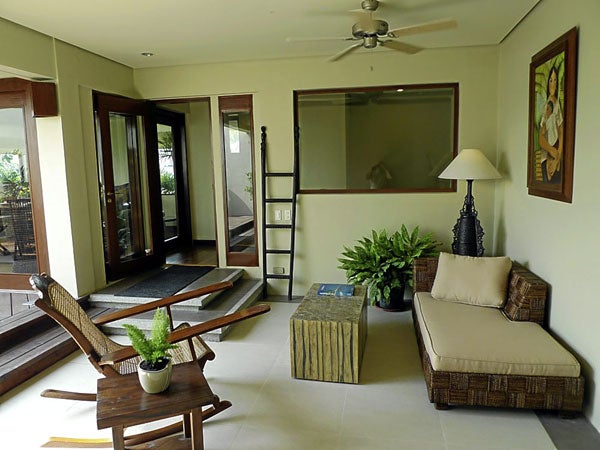 Inspired by the Nipa Hut

With construction costs and property values soaring into the stratosphere, a “dream home” remains just that for most of us – a dream.

Even the relatively well-heeled are balking at the massive investment that a single detached residence in an exclusive metropolitan subdivision now represents.  Many are instead opting for the greater convenience and investment flexibility of a unit in one of the higher-end luxury condominium or townhouse developments currently rising in the city.

How can you tell if a development is high-end?  For one thing, the units actually resemble the photos in the brochures.

These developments are worlds apart from the grim, anonymous concrete slabs currently being sold in the hundreds by the small army of salespeople deployed by the myriad real estate developers – as well they should be for the premium price tag.

But while they may be bigger and better appointed, and actually in the city instead of Fairview or Las Piñas, most of them still lack a certain style.  In the end, they’re still just another condo or townhouse built by a faceless corporate entity.

But there’s a better way, a middle ground, a real alternative for the more discerning buyer.

It’s called a managed development, and it has one key difference from your usual housing development:  the units are designed and built from the end-user’s point of view, not the seller’s, so the emphasis is on livability, not profitability. The price tag may be a bit higher, but that’s because no corners have been cut in construction and finishing, as is the case in most projects.  In the end, you get what you pay for, a place you can really call home.

A case in point is Lantana Lane, a 14-unit townhouse property in New Manila designed by the renowned architect Francisco “Bobby” Mañosa, best known as the designer of the Coconut Palace, the Edsa Shrine, Amanpulo resort, and dozens of well-loved private residences in some of the best subdivisions in the country.

Lantana Lane is revolutionary in many respects: its guiding vision is Filipino architecture, and its design incorporates several green features that embody an earth-friendly, sustainable philosophy.

The concept came together after years of working with real estate developers, says Dino Mañosa, son of architect Bobby and CEO of Mañosa Properties, the managers of Lantana Lane, a spin-off company of the family firm Mañosa and Co.

“Whenever a real estate developer came to the firm to design a project, the result was that both the developer and my father would end up frustrated,” he says.  “My father was of course thinking of the end-user of the units when designing the project, while the developers were naturally driven by a good return on their investment.   The initial presentation by the architects to the client was always met with a ‘Wow!’ but after computing the costs, he would always come back and say, ‘Your details and the quality of materials are too high, please downgrade.’  That’s why we set up Mañosa Properties.  Our pitch is, ‘concept to design to execution to property management.’”

A disused two-hectare family property in New Manila, Quezon City proved to be the ideal site for the company’s debut project.

“The property belonged to my maternal grandparents,” says Mañosa.  “We used to go to ‘Mamita’s’ house on Lantana St. every Saturday.  The family always called her house ‘Lantana,’ so I ended up calling the project ‘Lantana Lane.’”

“The property had fallen into disarray and had been abandoned for many years,” he continues.  “My relatives wanted to sell it, but offers were too low.  I convinced them to let us develop it for them.  I was then the CEO of Mañosa and Co., and had always wanted to get into the real estate game.  I had the property appraised and offered a 20 per cent premium to the owners.   Some family members were quite sentimental about selling, as they had all grown up there.  I explained that it would be nice if they could do justice to the inheritance by developing something they could all be proud of.”

Once the family had decided, Mañosa set up Mañosa Properties and lost no time getting his father to come up with a design concept.

“There were three design considerations,” he elaborates.  “One, it had to be Filipino.  The project had to carry the Mañosa brand.  Our purpose for being is to instill national pride by showcasing our brand to the world through our projects.  The way Manny Pacquiao and Lea Salonga instill pride in every Filipino.  We want people to see our projects and say ‘That’s Filipino architecture.’”

“Two, the project had to be green.  Many don’t realize that the greenest houses are those designed for our climate and culture.  Lantana Lane is our interpretation of the bahay kubo for a townhome development.”

“Three, it had to be sustainable.  We have a property management team who will manage the project after we turn over the units to the owners in October.  We would like to come back 10, 15 years after and still be proud of what we’ve done.  Maintenance is very important to us.  This part of the business is not a profit center for us, unlike most developers who also manage their projects.  We see it as a must to increase the value of the property and therefore our brand.”

In marked contrast to most real estate developments which take pains to emphasize their foreign design elements as a marketing strategy, Mañosa Properties stuck to their guns and pushed Filipino design elements, drawing from indigenous models such as the bahay kubo and the bahay na bato.

According to Mañosa, “We designed the units the way the old bahay na bato were designed, where the ground floor was the service area (i.e. carrosa, servants’ quarters, laundry, dirty kitchen, etc.) and the family live on the floors above.  The family room, kitchen and living rooms are found on the second floor, with a bedroom.  The third floor has the bedrooms plus a study area or family room. The penthouse has the den/or additional bedroom plus deck area for entertainment.”

The architect also drew inspiration from some unlikely sources.

“Because of limited space and real estate costs, we had to build upwards.  My father was inspired by observing how squatters below the Skyway build their shanties, upwards, with the top floor used as an entertainment area or additional family space.”

The Mañosa trademark is the use of indigenous materials, and they went to town with this, using native araal stone for the façade and even bringing in Igorot craftsmen from Baguio, who still have the skills for building with it.  Bamboo flooring was used for the entire unit and the outdoor decks.  Weaving from Cebu was used in the ceilings.

The units also incorporated such Filipino design elements as a banggerahan, interpreted and brought to the 21st century in stainless steel, windows that follow patterns set by the bahay kubo to provide light and ventilation, and a kubo structure on top to mark the structure as Filipino.

Lantana Lane is also distinctive in its use of green design features.

Apart from allotting an unheard-of 60 percent of the property for open space, with plants and gardens, the units are equipped with 1,000-liter rainwater collection tanks, allowing the residents to use rainwater to flush toilets, water their plants and wash their cars instead of wasting precious drinking water.

Units are lit with energy-saving CFL and LED lights.  Recycled materials were used where feasible, in the driveways and parking areas.  Insulation was used strategically to reduce the need for cooling.

Also, no trees were cut down during construction.

“What sets us apart from other neighborhood developers in the area is that we broke away from the common trend that ‘bigger is better,’” says Mañosa. “We believed that people would buy based on quality—quality of concept, the design and the materials used. That’s how we managed to sell out. Very few developers put real emphasis on design. To us design is not an added expense,  but an added value.  Design often makes the difference between a place that simply exists, and a place that can thrive for years to come.”

“Another main difference is that we view our developments from an end-user’s point of view. For example, the original concept called for 16 units. But after we went to market, we realized that it would be better to reduce the community by two units, so the other units could have gardens. We did so immediately, reducing our professional fees by some 15 percent; but this was never even an issue to us.  This is not our orientation in doing business, as I have learned from my father.”

“We know that our buyers appreciate this as well; three of them are in fact real estate developers themselves. The secondary market for the units is now 40 percent higher than the buying prices! Had we realized how strong the brand would be, we would have kept most of the units to sell once completed!”

Not to worry, though.  Mañosa has several similar projects in the pipeline, one a few streets away from Lantana, another in Cordillera St. scheduled in the next few months.

“We have gotten tremendous positive feedback from this development,” he says.  “We will continue to develop similar projects. But being development managers, we do not have (yet) the same resources as a typical developer, so we cannot buy land. But we constantly keep an eye out for landowners as well as investors who believe in our brand and vision to spread Filipino architecture and make us proud of it.”