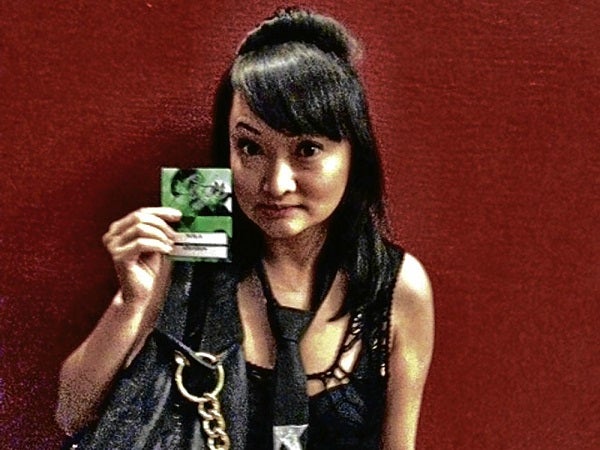 PSYCHED The author right before the momentous meetand-greet at New Orleans Lakefront Arena, holding her precious Gotye Aftershow pass and wearing her gift to the artist around her neck

I first heard of Gotye via Triple J, the Australian radio station known for discovering great new music.  During the first few strains of the now unmistakable “Someone That I Used To Know,” I was sonically jolted, so I went straight to YouTube to listen to the song in its entirety.

It was a perfectly crafted tune in my book.  The narrative, the arrangement, the quirky xylophone hook, the timbre of Gotye’s voice, the production; every detail was so well-thought out.   Throw in Kimbra’s powerful vocal reply, and I was, just, for the lack of a better word, mind-blown.

This was in July 2011, when the stripped down but impactful Natasha Pincus-directed video had 17,000 views.   The video has since racked almost 400 million views and spawned a multitude of remixes, cover versions, parodies, and spin-off hits (like the 5-person-1-guitar rendition by Walk Off The Earth).

Little did I know this was just the beginning of a most surreal musical adventure.

My family friend, Steven in Los Angeles, is my concert sidekick.  He is always the thoughtful one who grabs an extra ticket for me when our favorite acts roll into town.  Never mind if I live on the opposite side of the Pacific Ocean.

This time, I was not as lucky, and Steven had to work during Gotye’s very first LA show (at my favorite Silverlake music joint The Satellite).  I told Steven, let’s just give the pair of tickets to our friend Melany.  She and a friend had been dying to see him play, and our 25-dollar tickets were now selling for 250 bucks!  (Those scalpers are just ruthless, I tell you.)  We gave up the tickets for face value.

Mel called me long distance, thrilled and grateful.  “OMG is there anything I can do for you?”  I told her, “Nah, just enjoy the show!”  Then as an afterthought, I said, “And, uh, if you ever get to meet Gotye, just give him a copy of my demo.” I scanned a handwritten note and e-mailed it to my friend, who was one of the very fortunate fans who caught that milestone gig in October 2011.

I am a fashion designer by profession, but my heart has been telling me the past couple of years to pursue my childhood passion, music.  And so I am one of those dreamers who carry a bunch of demo CDs in my purse hoping for a big break in the music industry.  I also happen to be very shameless, and so I have been able to hand my demo to actual famous people, like Beck, Jon Brion, David Foster, Michael Bolton (I know, so random), and even blogger Perez Hilton whom I met at a Sia concert (now that’s another good story to tell).

Obviously none of these people responded to my brave little handout.

As for the demo I sent through Mel, she told me that she never got to meet Wally (he was whisked off to a flight right after the gig), but she passed it on to one of his road assistants.

I completely forgot about the demo, but I was happy to see how Gotye had just risen to the top of the music charts everywhere, gaining a massive following all over the world.

Call it good fan karma, but in April 2012, an insane surprise would be waiting in my Gmail inbox.

I was in Switzerland being hosted by a wonderful Filipino-Cambodian family, and I woke up the usual way, groggily grabbing my laptop.

There was an e-mail from a certain Wally that began:

“Hi Kate!  Well this is incredibly late but I finally got the chance to listen to your song and read your letter.”

My brain was not responding to this.  So I had to go over the e-mail around five times before it finally sank in.  And then I almost fell off the bed.

He even said some kind words about my work, which I will keep forever in the deep recesses of my singer-songwriter heart.  I was floored.  (My host Chris can attest to my utmost joy that lovely spring morning in Seon!)

As soon as I composed myself, I wrote an excited reply.  I totally played it cool—but I really am not cool, period.  But at least a written missive does not require volume control!

Wally, even in correspondence, is a genuine class act, sweet and polite.  I thought, how could someone as famous as him even find the time to reach out to fans like this?  We exchanged sporadic messages in the course of a few months.

Wally said there would be a bunch of tour dates coming up, and generously offered to put me on the guest list “for a show nearby.”  Philippines date?  None.  I didn’t think it would actually happen, but I appreciated the thought.

I unexpectedly ended up in the US in the fall for wedding duty and some gigs.  I shot Wally an e-mail and it turns out that our schedules would align for his New Orleans show.  I had never been to Louisiana, but my friends, Thad and Xiomara, lived there and agreed to host for me as we had not seen each other in almost a decade!

Wally said I could bring a friend to the Lakefront Arena show.   Thad, my friend’s doting husband who also played music, was game to be my chaperone-slash-designated driver.  I was so giddy and nervous the entire time, but I came prepared.  I brought my camera, an embroidered necktie that I made especially for Wally (the design echoed his album art), a copy of his album and grabbed our VIP seats.

Wally and his band exceeded my expectations—they were phenomenal live!  Gotye onstage was a seasoned multi-instrumentalist:  One moment he’d be on the keys, then the drums & percs, then on those fancy gadgets that he programs with all these interesting sounds and effects.  Each number was accompanied by stunning visuals crafted by artists handpicked by Wally himself.

High from the excellent show and the encores that followed, a small group of guests were then escorted to a private hall in the arena where we waited for Wally and the band to meet us.  Wally stepped out carrying a stuffed gator, a gift from a fan.

I was the last to approach him because I had an instant panic attack when I saw him up close.  He is even more handsome in person, geeky and self-effacing—you wouldn’t think he was nominated for three Grammy Awards.  He flashed his trademark crooked grin at me and I stuttered my way into introducing myself.  “KT!” he exclaimed.

And that’s the moment that I knew I would be a fan forever.  Because my online acquaintance, the artist I looked up to, became a friend IRL—in real life.  Thank you, Wally, for the gift of your music and meeting you!

Gotye is performing at the Laneway Music Festival in Singapore on January 26th and Neo Soul in Taiwan on January 28th.  For more tour dates, check out www.Gotye.com.  Would you like to catch Gotye in Manila this year?  Post your wishes on KT’s wall:  www.facebook.com/katetorralba.

Kate Torralba is launching her “Long Overdue” album this first quarter of 2013.  She is performing during Sinulog weekend in her hometown Cebu:  Kisaw! Sa Sinulog 2013 at M Citi Suites. Visit www.msuitescebu.com.   For KT’s local and international tour dates this year, follow her on Twitter @katetorralba; on Facebook; and her new blog www.KTLately.com.