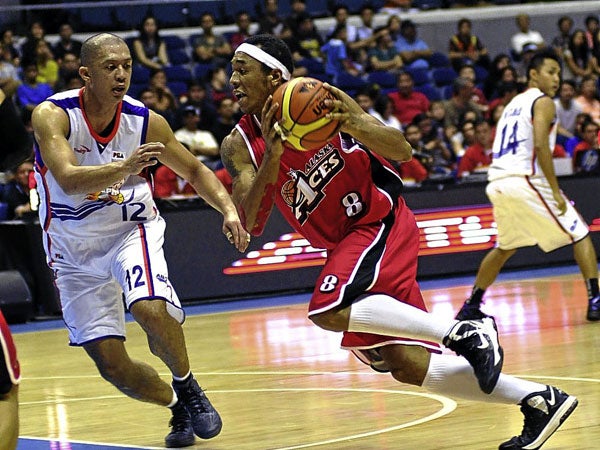 When Calvin Abueva signed up for the rookie draft, he listed his height as 6’4”. Turns out-after an official measurement-he actually stands just 6’1½”.

Not that it mattered. After all, it’s Abueva’s raging-pitbull brand of play in the amateurs that got the pro basketball league all excited at his arrival.

“He is a ball of energy who brings so much passion to the game,” says coach Luigi Trillo of the Alaska Aces, the team that drafted Abueva second overall in the Philippine Basketball Association (PBA) last August.

Of course, it’s described as passion when you’re playing on Abueva’s side. His opponents sometimes term it as mere rough play.

It’s easy to see it that way.  Especially if it’s his get-out-of-my-way strut and trash talking that you remember. Or that perpetual scowl and dirty antics, such as the on-court spitting incident early in his college years.

Indeed, how can any coach give up on a crazy but excellent player who racks up a PlayStation-like stat line of 21 points, 20 rebounds, 10 assists, three blocks and two steals in one game?

Abueva’s mad skills-all stemming from a natural brute strength that got him the moniker “The Beast”—had been the storyline in his entire stint with the Stags, whom he powered to the 2009 NCAA championship.

In his farewell run with the Stags last year, Abueva made history as the first player in any major Philippine basketball league to emerge as the leader in points (20.1 points per game), rebounds (16.4 rpg) and assists (6.5 apg), all in one season.

Despite such phenomenal numbers, Abueva failed to cop his second straight NCAA Most Valuable Player award.

The reason? He got disqualified for the honor after being suspended for one game for punching an opposing player.

The 24-year-old Abueva, though, claims he has kept his temper in check since turning pro.

“Kaysa gumanti ako, mas iniisip ko kailangan ako ng team kaya focused na lang ako sa game (Instead of hitting back, I just think that my team needs me so I have to keep my focus on the game),” he says.

Focused and driven. That’s how Abueva has always been even as a kid growing up in Pampanga with three women—mother Evelyn, grandmother Purificacion and sister Jovelle. He opted to use his mother’s last name since he hardly knew his American father, Calvin Sweeney.

Although life was hard—home was just one cramped room in Balibago, Angeles City—Abueva never let go of a boyhood dream inspired by the legendary Robert Jaworski.

It was by watching one of the Philippines’ all-time best players, imitating his moves and fiery stance—albeit in slippers—in a makeshift goal that Abueva found his ticket out of poverty.

“Marami nang nagbago mula nung nag-start ako sa Pampanga. Pero noon pa, all-out na ko maglaro (Many things have changed since I started in Pamapanga. But even then, I always give it my all),” he says.

And the stat sheets don’t lie.

Hardly missing a beat, Abueva brought his boundless energy and monstrous double-double performances to the pros. Incredibly, he wound up as one of the top five players in the league—the only rookie at that—by the end of his debut conference.

In fact, Abueva was one of only two players to average in double-double figures with 14.6 points and 10.2 rebounds per game by the end of the elimination round.

“I just let him be Calvin,” Trillo says of his super rookie. “He’s going to be the backbone of this franchise.”

By now, no one really cares if he padded his height.  After all, most people agree, Abueva plays larger than life. •