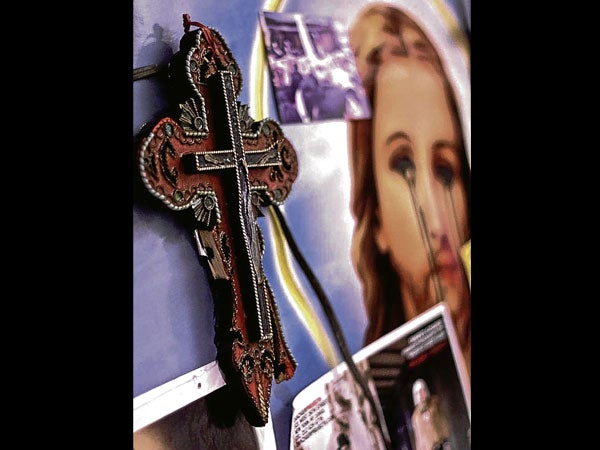 (The author is PDI Lifestyle section’s Arts and Books editor) 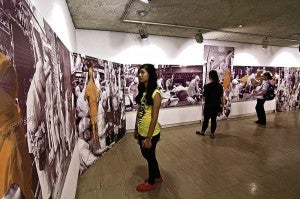 The furor over Mideo M. Cruz’s “Polytheism” is understandable. In the true spirit of contemporary art, the work is calculated to be offensive; it is blasphemous and sacrilegious.

Now we can’t get over the shock. And if “Polytheisms” is to be faulted at all, it is that its shock value has largely detracted the public from the larger picture of the exhibit, “Kulo.”

Curated by multimedia artist Jaime Pacena and Fine Arts professor Jocelyn Tullao-Calubayan, “Kulo,” ongoing at the Bulwagang Juan Luna (Main Gallery) of the Cultural Center of The Philippines (CCP), gathers artists and writers who have studied at the University of Santo Tomas, the cradle of modern art in the Philippines.

Although not officially sanctioned by the Pontifical University, “Kulo” is however a “Thomasian” enterprise. It cannot be avoided. “In essence, this is also an unofficial ‘All-Thomasian Artist Exhibition’ in relation to the 400th year celebration,” explained Tullao-Calubayan. “It hopes to re-evaluate the contributions of the Thomasian artists, outside the confines of the University structure itself, (and connect them) to the art dialogues and communities in the Philippines since the 1970s.”

The title of the exhibit refers to the state when things simmer and boil, obviously brought to that point by art coming into contact with the social and historical moment. And the exhibit has been able to achieve this through the works of the contributing artists, and not alone Mideo M. Cruz’s “Polytheisms.”

Entering the exhibit hall for example, one comes into contact immediately with Alfredo Esquillo’s painting, “Mama Kinley II,” a striking reworking of the Madonna and Child genre, portraying President William McKinley suckling a Filipino child looking much like Emilio Aguinaldo. All at once, the painting evokes a gamut of meanings related to Philippine history (the first republic in Asia nipped in the bud by an all-too presumptive new colonizer that claims it had the mandate to Christianize and civilize a people that had in fact already achieved those remarkably); to classical art, its reinvention by modern art, and the role of UST in Philippine art history (Galo Ocampo, one of the professors recruited by National Artist Victorio Edades when the latter founded the UST school of fine arts, for example, recast the Madonna and Child genre into his famous painting of the Brown Madonna, an indigenizing feat that appropriated and “naturalized” a western style); and of course, neo-colonialism and how the Philippines continues to draw cultural and economic nourishment from-and enslavement by-the US.

Andres Barrioquinto’s “Alam ng Diyos” (God Knows) largely operates on the same artistic strategy as Esquillo’s, remaking the portrait genre to provide the stark close-up of a grieving person while in the background, the whole world goes up in flames.

Some of the works openly embrace digital art with barely any reference to traditionall art. Pacena sets up a video installation using footage from his music videos. Buen Calubayan, who has done brilliant graphic works that may also rile religious sensibilities, is represented by a digital print on tarpaulin showing enlarged reproduction of images from his “Vanishing Point” paintings. The effect is a transfixing play on colors, figures and lines.

Team Manila, the trailblazing design firm owned and operated by UST fine arts alumni, is represented by its Andy Warhol-like take on Rizal iconography. The result is the medium becoming message: the national hero as a pop icon for the 21st century in more ways than one. 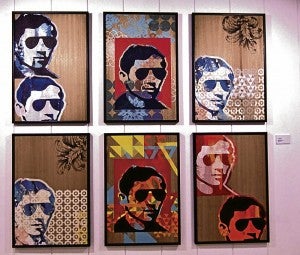 The Rizal theme is echoed in writer Pocholo Gotia’s exhibit essay, “Hundreds and Hundreds of Years,” in which he comments on the uneasy relationship that has obtained across history between Rizal and UST. By now that history has been exposed an urban legend. Detractors point to the Anatomy Class episode in “El Filibusterismo” as proof of Rizal’s dislike of UST, but as scholars such as Florentino Hornedo, Jose David Lapus, Regalado Trota Jose, and Fr. Fidel Villarroel have pointed out, it’s by and large fiction and that Rizal didn’ t take up Physics in UST. They’ve also pointed out that elsewhere in the novel, too, Dominicans are portrayed sympathetically.

“The artists featured here did not produce work to commemorate the 400 years of the University of Santo Tomas, or the 150th birth anniversary of Jose Rizal,” Gotia writes about the artists, some of whom he says has had “spats” with UST. “Or, at least, that is my belief: they must have their personal reasons, that will, and must, remain their own, until we bear witness and into our hands they commend their spirit. But there is no denying they are here, they are now, and are as much under the shadow of our communal history as you or I.”

Gotia’s essay discloses the burden of history that UST carries as a relic of Spanish colonization. It also reveals that much of the burden has something to do with incorrect historiography and the incapacity of critics and detractors of the institution to question the premises of the judgments they make against it.

For example, Gotia says that the artists’ encounters have been “with the better 21st century version” of UST, in effect condemning much of the 400 years of the institution, indeed, the totality of Spanish colonization and Catholic evangelization. The remark at the least betrays characteristic liberal disregard of the cultural patrimony of the past, which infects as well Mideo M. Cruz’s work.

In his prose poem, young Filipino poet Joseph Saguid makes the same reference to the problematic relations between UST and the national hero and seems to suggests that the institution has made revisions of its history (presumably to deodorize it history?). 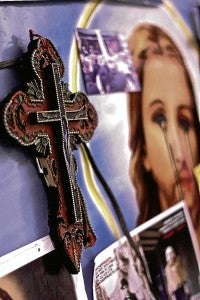 But easily the most impressive work in the exhibit is Jose Tence Ruiz’s “CSI (Chimoy Si Imbisibol), a monochrome on print work with acrylic on canvas. It shows several hooded and obscured figures in different attitudes of labor and “busyness,” a powerful set of images of the Filipino as the global domestic. The figures are attired in clinical white, much like the forensic experts whose crime-lab work is minutely detailed in the violent American TV crime series, “CSI.”

The message is stark: The Filipino has systematically made a profession out of the diaspora. The pathos of the work cannot be missed.

Much like Saguid in his poem, Tullao-Calubayan has called for “dialogue” on the more controversial aspects of the exhibit, especially the work of Cruz.

Sadly their tact has not been adopted by CCP officials, who have arrogantly called the reaction to Cruz’s work as “moralist hysteria” and “religious myopia.”

The reaction by Catholics and other Christian groups to Cruz’s work is understandable. The installation features a collage of religious images and pictures of Christ, Mary the Mother of Christ, Holy Family, saints, and the rosary—all closely surrounded and placed beside pictures of women who appear to be modeling for underwear or a skin product; and a wooden cross draped with a pink stretched-out condom.

These are images intended to provoke and even offend. And provocation is part and parcel of contemporary art.

To their credit, Tullao-Calubayan and the other curators placed Cruz’s installation in a corner of the exhibit hall which one has to enter in order to witness. (This is somewhat the same set-up for another installation, Leobensant Marquez’s “Dogmatik Automatik,” in which a confessional box contains video footage of what appear to be images of folk Catholicism.) 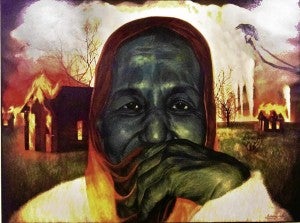 One would have wished there had been a further sign making the Dantean warning to the viewer to “abandon all hope all ye who enter here,” but the curatorial strategy taken on Cruz’s work should indicate that the exhibit organizers did not deliberately intend to make an attack on religion with the works on show.

As contemporary art, Cruz’s work has all guns blazing to make its point: How religion has supposedly been commodified and how capitalist commerce has become the new religion. But his point is missed because conceptual art as always is all concept with art all woefully inadequate.

In his notes, Cruz says he inveighs against “polytheisms” such as Christianity commodified and today’s prevalent neoliberalism. But his images of Christianity are all drawn from Catholic popular iconography and he commits the same misconception about Catholic images—that their veneration is a form of idol-worship rejected by Old-Testament monotheism. He links this idol-mania with capitalist advertising, which embodies neoliberalism.

At the least, it could be said that Cruz has a stunted view of Catholicism: He doesn’t seem to have matured beyond the childhood horror of icons of the Blessed Mother and her seven dagger-dolors and of the bloodied image of the Santo Entierro brought out on Good Friday.

Cruz also seems impervious to the historic hostility between the Catholic Church and modern liberalism. In fact, the Church’s social teachings continue to condemn liberal capitalism for its excesses, its eager rush for progress for the sake of progress.

Cruz’s work lacks self-reflexivity. While he proclaims his work as a historico-cultural critique, he doesn’t seem aware that his version of Philippine history—“being 400 years under Spain and several years in Hollywood,” as his notes say—is a liberal cliché.

Cruz’s work is iconoclastic art in the most literal sense of the term. It is iconoclastic art that ironically uses iconography—as crafted by Catholic art and image—fashioning across 2,000 years—to state its point and make its critique. Simply based on the premise of its revolt, it is art whose attitude is mercenary, that is, hopelessly liberal and capitalist.

With all of its conceptual and material contradictions, Mideo M. Cruz’s work collapses from the weight of its plurosignifications. It’s not art, it’s a mess.

Contemporary aesthetics insists, nay pontificates, that all art is political, that is, in the true spirit of postmodernism, that art is determined by economics, history and linguistics. But the CCP leadership has expressed surprise at the political reaction to Cruz’s work, insisting on the autonomy and independence of the creative spirit and attacking the alleged forces of hysteria and obscurantism.

Not even taking the postmodern tack at self-criticism, the CCP seems to ignore the fact that it is an institution of the state, and that it has an uncomfortable history that has made it at one time, wittingly or unwittingly, complicit with totalitarianism.

Considering all that has happened, has Mideo M. Cruz really missed out on the one totem pole that must be toppled and smashed?