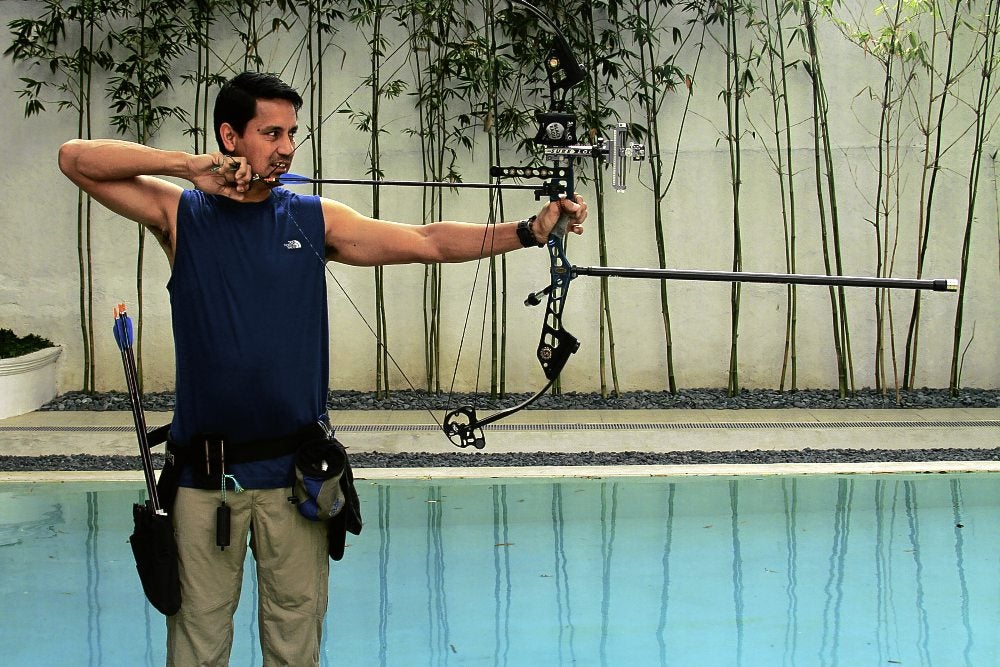 HAND-EYE coordination is essential in archery. PHOTOS BY NELSON MATAWARAN

Richard Gomez aims for the bull’s-eye

Standing 10 meters from the target, Richard Gomez pulls a pencil-thin arrow from the pouch on his hip. With his bow stave positioned toward the target, he aims and releases the arrow. It lands, piercing the board, which is as tough as cement.

“Did you see how it penetrated the backstop? You couldn’t do it if you hammered it. The arrow can penetrate deeper than a bullet,” he observes.

Marksmanship has been an enduring sport for the actor and congressional chief of staff. At the start of his Bench endorsement days in 1987, Gomez engaged in pistol shooting. By 2001, he was into shotgun shooting. Six years ago, a gun ban during election season put a damper on his sport.

He then sought an alternative by visiting the archery range of Southeast Asian gold medalist Earl Yap. The sport was simple—firing arrows at a bull’s-eye, and scoring points for precision. Despite his athletic records in other sports, Gomez is not intimidated about learning new skills.

“I want to learn from scratch and work my way up. In any sport, the fundamentals have to be strong if you want to improve. Some people just want to keep pulling the bow,” he says.

Gomez uses a compound bow, a modern bow which reduces load on the muscles. He favors aluminum arrows with natural feathers (fletchings) over plastic. “The speed matters, especially indoors when the arrow is not so fast.” The feathers have an effect on the arrow’s course.

To the uninitiated, the sport may seem a mechanical act of firing arrows. Archery does not leave room for mistakes. A little shift or breathing too soon can condemn an arrow that might have otherwise hit the target. Gomez recalls how he misfired an arrow that flew into another house.

However, he reaps benefits from archery, such as improved concentration and the joy of solitude and relaxation.

From Monday to Friday, Gomez is in Ormoc working as chief of staff to his wife, Rep. Lucy Torres Gomez, of the fourth district of Leyte.

During weekends in Metro Manila, he wakes up early to shoot an average of 150 arrows. “Even with trap shooting and shotgun shooting, you do about 150,” he says.

To Gomez, the more focused he is on the target, the easier it is to quiet his mind and to aim accurately. These same skills help him deal with work pressures and to remain concentrated on his duties.

When the sport becomes a mindless repetition, he stops. “That means I’m not learning anymore. It’s like a graph; once you hit the peak, stop before the curve goes down. If you push yourself too hard, you get frustrated. Relax, tomorrow is another day.”

Gomez has been a staunch advocate of sports. Sports kept him out of trouble in his youth. “People ask me how I do things. I tell them I always prepare,” he says.

With the advent of the election season, the subject of politics is inevitable. Lucy is running for reelection while Gomez is making a bid for mayor of Ormoc. Both are running under the Liberal Party slate.

The couple initiated the modernization of the track-and-field oval and are developing a baseball field. The public basketball courts will be getting better boards and rings.

Gomez underscores the importance of sports in the community. They offer places for people to get together and share common interests. Public spaces, where people can exercise, help promote community health and well-being.

“Sports is your antidote against drugs. Enjoy sila, laro sila,” says Gomez on how sports gives a natural high.