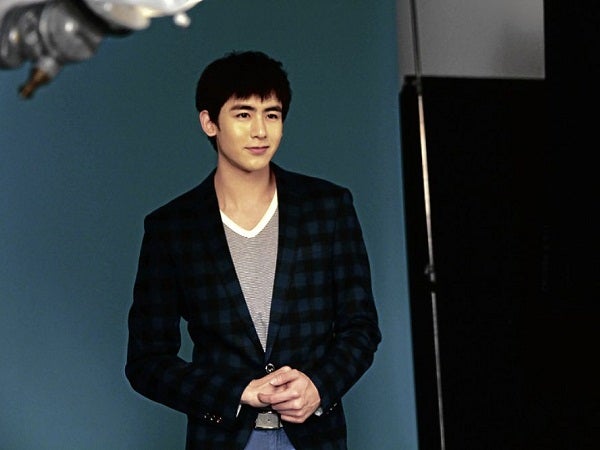 A Super date with 2PM’s Nichkhun

It’s 2 p.m. in sunny Bangkok. Just inches away, Thai-American K-pop idol Nichkhun is slouched comfortably in his seat, lips curved into that closed-mouth smile of his. He has just finished shooting his ad campaign for Bench at the ultrahip Chamni’s Eye studio in Suan Luang district, and we only have a few minutes to chat before he goes to rehearse for a solo show downtown.

Clad in simple T-shirt and jeans, his cropped hair slightly tousled from changing outfits, Nichkhun seems so much younger than 24. Up close, he looks more like a tall, cute

But he has a warm, friendly vibe that puts you right at ease. He’s so refreshingly unassuming that it’s easy to forget he’s one-sixth of 2PM, the South Korean boy band that’s been making teens squeal across continents. Then there’s the fact that he never takes his twinkling, puppy-dog eyes off you while you’re talking. No wonder it feels like it’s the hottest time of day.

Nichkhun (pronounced “Nick-koon”) is the latest heartthrob to join the ranks of Bench’s K-pop endorsers, hot on the heels of actor Lee Min Ho and fellow idols Siwon and Donghae of Super Junior. Ironically, he’s not even Korean to begin with.

Born Nichkhun Buck Horvejkul to Thai-Chinese parents in the United States, he spent his formative years in Thailand, studied for a year and a half in New Zealand, and returned to his California hometown to finish secondary education.

Shortly after graduating, he was scouted by a producer for JYP Entertainment at a K-pop festival in Hollywood. Upon passing the auditions, he was sent to South Korea for training, and debuted in 2008 as a member of 2PM (which formerly included Korean-American artist Jay Park).

Aside from singing, dancing and rapping on occasion, Nichkhun plays the guitar and the piano remarkably well, which has pretty much raised the shrieks to earsplitting levels during his solo bits in 2PM’s past shows. Also, like most K-pop idols, he’s tried his hand at acting. (See related story.)

Watching him nail shot after shot during the photo shoot, one can see that the camera adores him. Naturally, he has a long list of endorsements—Korean, Thai and beyond—under his belt. What made him say yes to a Filipino brand?

“To be honest, I didn’t really know the brand until today, but I heard a lot about it,” Nichkhun answers in fluent English. “I like to keep it simple and not too shiny, not too outdone. And Bench… I tried on all the clothes today and they are actually what I would wear.”

As for style icons, Nichkhun looks to Justin Timberlake for wardrobe inspiration. “I like how he dresses. I like to call it ‘California style’—simple, easy, breezy, casual.”

He likes the Bench wardrobe so much that he’s planning to get some for his 2PM brothers when they go to Manila for their first concert at the SM Mall of Asia Arena on March 2. “I’ll show them my pictures, and I’m pretty sure they’re gonna love the clothes, too.”

Any favorites? “I like the short-sleeved button-down shirt with the polka dots. That’s something I would put on.”

Fun with the fans

Apart from the clothes, we find out that there’s something else that makes him happy to have accepted the endorsement: “I just want to be involved with the fans in the Philippines more, to actually meet them and do activities with them. I think that’s one of the biggest reasons,” he says earnestly. “They always ask me [on Twitter] to come. ‘When are you going to come to the Philippines? We wanna see you.’ I actually feel bad that it’s taken us so long to do a concert, to go to the Philippines and meet the fans, so I think we’re gonna have a really great time and have fun with the fans there.”

The coming show marks Nichkhun’s second time to visit the country. In early 2010, he and actress Song Ji-hyo had gone to Manila’s Baseco community to do some charity work for Korean TV show “Danbi.” Although the visit had supposedly been low-profile, Pinoy fans still got wind of the news and followed their idol everywhere, from Naia all the way to Baseco. Crazy as that might sound, the fans’ painstaking efforts hadn’t been in vain.

“I had a really good time… Like, not just to go to the mall or the beach, but to actually get to spend time with the local people, which is one of the best experiences,” he says. “Before I arrived in the Philippines, I wasn’t expecting to see any fans at all because I’ve never been there. As soon as I arrived, there were a lot of fans just waiting there for me, and I was really surprised and touched by them.

“They made me really happy,” Nichkhun continues, smiling fondly at the memory. “[The fans] followed us around and they actually helped out, like picking up the trash, helping the kids. They even baked with us. We were baking bread and stuff to give to the people there in the community, and they actually came and helped, which was a memorable time.”

For a K-pop star to actually use his celebrity status for a good cause, and be able to influence others to do the same, is simply admirable. The road to achieving that kind of fame hadn’t been easy, but it has taught him something very valuable. He sums it up in one word: “Gratitude,” he says, turning serious. “To know how you got to where you are, and who were the reasons for you being in this position… I think that’s one of the best lessons I’ve learned.”

It’s great to know that he’s not just an idol by face, but also by example. Kudos to him for keeping the spirit of “bayanihan” alive. Incidentally, the term piques Nichkhun’s curiosity. “I’ll definitely learn some Filipino words to say to the fans… Maybe I’ll use that when I get to the Philippines,” he adds thoughtfully as he repeats the word after me.

Uh, maybe not that one. What other words does he have in mind? “I don’t know yet,” he says. “Something the fans will like.”

“I love you?” I offer, not so subtly. It is Valentine’s season, after all. “No, it’s gonna be a surprise, so you gotta come [to the show],” Nichkhun counters, slipping back into his trademark lopsided smile.

Oh, you bet we will.