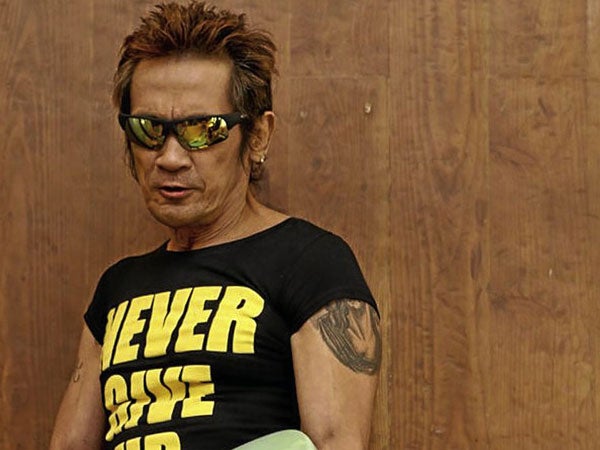 Not many can pull off the rock star look at 60, but Pinoy rock pioneer Gary Perez—best known as the lead guitarist for Sampaguita back in the peak years of Pinoy rock in the late 1970s, early ’80s—manages it, barely.

Still thin as a reed, he sports skin-tight jeans and a skimpy black tank top that shows off the Jesus tattoo on his left deltoid. He has his two daughters’ names—Francesca and Victoria—inked on the opposite arm. (Perez also has two sons, but he thought having boys’ names tattooed on his body might seem a little, well, gay.)

He’s also kept most of his hair, teased and bleached in a classic spiky rooster ’do, perhaps a throwback to his heyday during the glam rock years.

The lines on his face are less from mileage than from worry: At an age when most men are contemplating a well-earned retirement, Perez is basically back to crashing on a girl friend’s couch.

Granted, this is a basic rock ’n’ roll survival skill. But most rockers do this before they make it big, not after. Especially not after penning some of Pinoy rock’s most durable hits, such as “Tao,” “Bonggahan,” “Laguna,” “Sa Diyos Lamang” and a handful of others.

“I’ve never received any royalties from those hits, ever,” says Perez.

In fact, he adds, the only money he ever saw from those songs was after Sarah Geronimo recorded a cover version of “Tao” on last year’s “Pure OPM Classics” album. Viva Records, Geronimo’s label, coughed up some cash, but his manager at the time and the lawyers took most of that. What was left wasn’t enough to keep him from being evicted from his apartment, he says.

Now he’s locked in a bitter dispute over royalties with his former lover and bandmate Sampaguita. Perez claims he holds the legitimate copyright to the songs, and has the documentation to back it up. Not only is he clearly acknowledged as the composer on the album cover and label of the classic 1978 “Sampaguita” album, but he says he has the copyright registration.

In previous statements to the media, Perez claims Sampaguita had been collecting his royalties during the more than 20 years that he had been living in the US.

In terse statements to the media following the controversy, Sampaguita and the album producer Nilo Santos (who is also Sampaguita’s ex-husband) have claimed that the songs were “collaborations” and therefore belonged to the band.

(In a recent TV magazine show on the issue, Sampaguita—Tessy Santos in real life—claimed in a statement that although the songs were “collaborations,” Perez had “copyrighted” the songs in his name while she was in Australia.  She also alleged that she was “being used” in this case to promote her former guitarist’s “lame” album.-Ed.)

“If that was the case, why did they explicitly credit the songs to me?” asks Perez. “If they were indeed collaborations, why didn’t they copyright them?”

Good point, but according to Noel Cabangon, president of the Filipino Society of Composers, Authors and Publishers (Filscap), of which Gary Perez is a member, they are unable to release the back royalties for the last three years because of Sampaguita’s competing claim.

“But she’s not even a member,” protests Perez. “And I have all the paperwork. Did Sampaguita show them any documentation?”

Cabangon has stated publicly that he hoped the parties could settle their dispute between themselves. If Sampaguita waives her claim, that would pave the way for releasing Perez’s royalties.

The Public Attorney’s Office has taken the case, and demand letters have been sent out. If it gets to court, the case could open a real can of worms, involving not only the band members, but their record companies as well. There are enough liabilities to go around. And apart from the record royalties, there are rights and performance royalties from such things as karaoke and television usage. Reliable figures are hard to come by in the record business, but amounts in the millions have been bruited about. It’s an auditor’s wet dream.

“I asked the lawyers if we are fighting for justice,” says Perez. “They said, ‘No, history. What’s yours.’”

Their reply might turn out to be prophetic: Gary Perez could indeed be history before he ever sees a peso of royalty money. Intellectual property disputes take a notoriously long time to settle. Freddie Aguilar is reportedly still chasing down royalties for “Anak” more than three decades later.

In the meantime, Perez is counting on the kindness of strangers, and friends. “For the Love of Gary,” a tribute concert, was staged Feb. 14 partly to help raise funds for the indigent musician. A young producer has helped him record a second solo album, and Perez is stoked about its first single, a pop ditty titled “Facebook.”

Broke down and busted, Perez just might find himself, at 60, back on the road again. It’s terrible, but in a sense, it might be what he signed up for when he set out on the rock ’n’ roll path all those years ago.

Gary Perez was born on Feb. 9, 1953. His father was Ben Perez, a well-known character actor whose career dated back to the golden age of Tagalog movies.

The young Gary found his mother’s work more to his taste: Alicia Pascual was a singer, and the excitement and camaraderie of performing musicians appealed to the young boy. When the Beatles came to town that sealed the deal. Perez picked up a guitar and never looked back.

In his second year in high school, he dropped out to live the wandering life of a professional musician. At 14, he found himself in Vietnam at the height of the war, playing Doors and Jimi Hendrix covers to rock-hungry US troops with his first band, the obviously-psychedelic Strange Hallucinations.

After his stint in Vietnam, Perez came to Olongapo, the Pinoy rock Mecca. He joined an outfit called Purple Star, and later the durable Olongapo mainstay the Jovials.

“Uso sa ’Gapo plakahan,” he recalls, referring to the practice of playing note-perfect versions of the hits of the day. “Hindi gusto ng kamay ko ang plakahan (My hand did not like that).”

He preferred to play songs in his own style. He found a mentor in Resty Fabunan of the Psyclones, Olongapo’s resident guitar hero.

It was after meeting Joey Smith and hearing his original songs that the idea of original compositions took root. In fact, Perez was slated to join Smith and powerhouse drummer Edmond Fortuno in a supergroup that never materialized.

Instead, sometime in 1975, Perez and Fortuno decided to revive the latter’s revered band Anakbayan, which had fizzled out after recording one album. Anakbayan Mark II managed to record two Gary Perez songs, “Pagbabalik ng Kwago” and “Sirang Plaka,” which enjoyed considerable airplay on the emerging Pinoy rock radio. They were all set to record an album with producer Nilo Santos, who had enjoyed success with Mike Hanopol and Wally Gonzalez’s solo efforts, but were sidetracked.

“Nilo told me, ‘I have a proposition for you: how about a female rocker? There’s never been one before.’ We would be the backup band. Nilo told me, ‘But you have to write some songs.’”

The female rocker turned out to be Santos’ wife, former model and Nine Teeners dancer Tessy Alfonso, who was given the stage name Sampaguita, after the national flower.

The rest is history, but some of it bears repeating: The first Sampaguita album turned out to be a smash hit, on the strength of Perez’s songs. To be fair, Sampaguita’s stage charisma and the novelty of a woman in rock also had a great deal to do with the band’s success.

Inspired by the book “Jonathan Livingston Seagull,” as ubiquitous in the ’70s as Harry Potter is now, “Tao” with its wistful imagery of birds and flight, coupled with an emotionally powerful chorus, was an instant classic. At first, radio DJs thought “Bonggahan” was weird and refused to play it, until the song gained momentum from the band’s live TV appearances. After that, “wa ko type ang magpa-cry-cry” entered the national vocabulary.

“That’s when I reached the pinnacle of my rock ’n’ roll dreams,” recalls Perez.

And then it all fell apart.

After Sampaguita’s split from Nilo Santos, she took up with Perez, and they all lived in a ménage a quatre with Santos’ girlfriend Cathy. (Hey, it was the ’70s.)

In 1979, the band opened for Eric Clapton at the Araneta Coliseum, and in what is now hallowed as Pinoy rock legend, the lead singer was so awestruck by the guitar god that she reportedly ended up spending the night with him, much to Perez’s chagrin.

Things were never quite the same after that.

They had three children in quick succession. After enduring Edsa 1986 and the series of coup d’etat that followed, Perez and his family decided to migrate to the US, his wife being an American citizen. There he lived the Pinoy OFW life, working as a service station attendant, head of maintenance at a McDonald’s, and as shipping clerk at Boeing.

“I did anything to feed my family.”

On weekends, he played with the church choir. Eventually, he formed a band called The Gary Project and toured Washington state, but family duties kept him from pushing it further.

Eventually, family squabbles ended in divorce. After spending some time in Florida with his mother, Perez decided to return to the Philippines in 2011.

“My kids used to ask me, ‘What do you do?’” he says. “I would tell them, ‘I’m a musician and songwriter. I wrote all these songs.’ One day one of my kids told me she had been to a karaoke, and one of my songs had been played, but the credit said ‘words and music by Sampaguita.’ That’s when I decided it was time to come home.” •