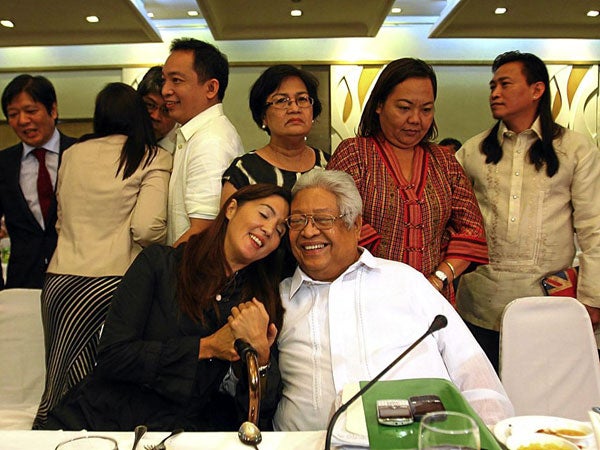 His detractors in the debate over the controversial Reproductive Health bill might have mentally consigned him to hell for his fiery defense of the measure that would provide poor couples access to contraceptives, and offer sex education to adolescents in public schools.

But unknown to even his allies in supporting the bill, Albay Representative Edcel Lagman was already in hell during the plenary sessions.

And all because a freak accident had severed the ligament on his right knee in April last year.

Lagman had borrowed his daughter Larah’s car to go to a meeting, but since the car’s seat was lower than he was used to, the congressman entered it at an awkward angle.  Suddenly, he felt his right knee burst “like a firework.”

Throughout the protracted amendments period, he endured the extreme pain in his leg. But that did not stop him from staunchly defending a bill that he had inherited from his daughter Kristel.

Lagman, the RH bill’s author in three congresses, had embraced the measure after his daughter, former Albay Rep. Krisel Lagman-Luistro (now Tabaco mayor), along with Aurora Rep. Bellaflor Angara-Castillo, championed it in the legislature 13 years ago.

During deliberations, the congressman’s left leg twitched from cramps as he vigorously defended the bill, but he was reluctant to complain lest the bill’s critics find an excuse to further defer the already painfully slow process.

“I can risk the cramps overwhelming me but never the critics of the RH bill succeeding in further delaying the legislative process,” he said.

Lagman even chose to forego an immediate knee replacement surgery last year as he did not want to be absent from the RH bill deliberations. Instead, the surgery had been scheduled after the elections.

He now walks with a cane, so as not to overburden his left leg while he allows his right limb some rest.  This has left him with both legs in pain.

But then again, the Albay lawmaker is used to adversity.

Thanks to his long and fiercely loyal association with former President Gloria Arroyo, Lagman might never make it to the list of most admired public officials in recent times.

As party mates in the Lakas Christian Muslim Democrats party, the two quickly became allies, with Lagman stolidly parrying issues against Arroyo.  Most of them didn’t hold water, he said, citing the election cheating scandal brought on by the “Hello, Garci” tapes that tended to cast doubt on the legitimacy of the Arroyo presidency.

“I think the results of the elections had been validated by the Comelec count,” Lagman said. “And the election protest was dismissed because of the untimely demise of (her election rival) Fernando Poe, Jr., so legally there was no anchor for questioning that legitimacy,” he added.

He was no friend either to the Aquino administration in its early years, having led the House in junking the Aquino-initiated Truth Commission that would have gone after the infractions of the Arroyo administration.

But though Lagman was a steadfast Arroyo ally, that did not get him anywhere when it came to his advocacy of the Reproductive Health bill.

These days, his relationship with his former ally can be described as tepid at best.

They are “civil at a distance,” he said of Arroyo. He greets her via text during her birthday, and she sent him flowers when his mother passed away.

Despite the cold shoulder, he had forged on with the debates on the controversial bill and helped midwife its eventual passage in January this year.

For that, he has been described as the father of the RH law by advocates of reproductive health, and not just because his crusade was also that of a father taking on a daughter’s cause.

Said fellow RH bill author Senator Pia Cayetano:  “Not to belittle the contribution of other male RH advocates—there were many of them—but it’s the most fitting description of the man who sacrificed so much time, hard work and patience to see this bill through.”

In doing so, the 70-year-old father of seven and grandfather of 14 earned the enmity of the influential Catholic Church. Like other pro-RH legislators, he soon found himself the target of regular attacks from the pulpit for supporting the bill.

His crusade might have affected his daughter Larah’s plan to have three priests co-officiate a thanksgiving Mass at the Mayon Skyline Park after her church wedding in Bicol was derailed because of their support for the bill, Lagman said. The priests were instructed not to be part of the thanksgiving ceremony, and two of them backed out, while the third held his ground, he recounted.

But it would take more than attacks from men of the cloth and the political opposition to get Lagman, hailed by fellow advocates as relentless, to back down from battle, a family trait perhaps since two of his brothers had paid dearly for similar activist politics.

The personal is political, he believes, adding that his own big family was part of the reason he supported the RH bill. The law is not against children or big families, he stressed; it was for bringing wanted children into the world.

Lagman himself has seven children (Krisel, Greco, Larah, Mahar, Mark, Karina and Andre) with wife Cielo, who he knew from childhood and with whom romance blossomed when they were in UP. They have 14 grandchildren, with a 15th due later this year.

Lagman is the eldest in a brood of five born to Cecilia, a public school teacher, and Pedro Eduardo, a prosecutor.

She was a feminist, he said of his mother. She had wanted to be represented as well in the name of their firstborn, so Eduardo and Cecilia became “Edcel.”

A product of the public school system, Lagman graduated with honors and earned his political science and law degrees from the University of the Philippines.  The managing editor of the Philippine Collegian was an activist in college who joined protest rallies against the Vietnam War.

His brothers Hermon, a labor lawyer, and Filemon or “Popoy,” a well-known labor leader, might have gotten their start in activism from him, he said.

Hermon was a “gentle but steadfast advocate for labor rights,” Lagman recalled, while Popoy was “an uncompromising militant.” The Lagman brothers have similar causes, but believed in pursuing them through different means, he said. He and Hermon used the existing legal structure, while Popoy went underground with the Left.

When martial law was imposed in 1972, Lagman was just starting his law practice.

He could not openly join his brothers then because he had a growing family, Lagman said. Instead, he lawyered for martial law detainees and other victims of the Marcos regime.

His brothers’ foray into activism would end in tragedy.

Hermon disappeared in 1977 and remains missing, while Popoy was assassinated in 2001, when he had left the underground movement, giving rise to speculations that he had been felled by his former comrades in the Left.

But Lagman’s family believes there was no reason for the Left to target him since he had never abandoned the movement. Popoy might have joined the parliamentary struggle, but he had kept his close affinity with the objectives of his former comrades, the Albay congressman said.

The loss of two sons and the elusive resolution of their cases, had been very painful for his mother, Lagman said, but being the strong-willed woman that she was, Cecilia put up the Families of Victims of Involuntary Disappearance (FIND) to help other families similarly affected by martial law.  She remained active in the group until she passed away last year at 92.

After martial law, Lagman joined politics, believing that fair elections would now be possible. He had nurtured this dream since high school, when he saw that it took so long for the government to reconstruct the crumbling infrastructure in Albay, which lies along the typhoon path.

But he was a virtual stranger to his hometown by that time, since his family had moved to Caloocan when he was in high school. Many of the old people who knew him as a boy had died, and the younger generation was unaware of him.

To solve that, he convinced his old teachers and the woman who employed him as a newsboy to get onstage during his campaign to attest to his being a true son of Albay.

He won as Albay representative in 1987,  completed three terms and was succeeded by daughter Krisel, a nurse by profession.  In 2004, she opted out of a third term because of a scholarship abroad, prompting the elder Lagman to return to Congress.

In Congress, Lagman actively pursued the RH bill that had been languishing for years. Despite his uncompromising stand on the bill, opponents found him a worthy foe who did not drag them down the gutter.

“He has always been a thorough and well prepared proponent of the advocacies and bills he has. It was always a battle of wits. We never had a shouting match or ad hominem arguments. We always stuck to the issues,” conceded staunch RH bill critic and Cagayan de Oro Rep. Rufus Rodriguez.

Fellow advocates commended Lagman for his patience and tenacity.

Elizabeth Angsioco of the Democratic Socialist Women of the Philippines marvelled at his tireless response to questions about the bill, even if the queries were illogical, impertinent, or insulting. At the same time, he was straightforward and never sugar-coated things.

“He responded to questions and comments in a manner that befits a legislator,” she added.

Gabriela Representative Luz Ilagan, saw Lagman as a good example for his colleagues.

“Confronting the myriad objections and challenging the conscientious and not so conscientious objectors with amazing self-control were lessons not found in textbooks,” Ilagan said.

Cayetano recalled how she and Lagman gravitated toward each other when the RH bill was inching toward the finish line to ensure its victory.

“Rep. Edcel was always calm, confident and composed, but when the bill finally passed (the) bicam (committee), I saw him break into a rare, wide smile. That’s when I realized we’ve won this chapter in the fight for RH rights,” she said.

Now on his last term in the House, Lagman has pushed for other controversial measures, among them the debt cap bill to limit the country’s debt service of foreign commercial loans (which did not pass), and the abolition of the death penalty (which passed).

Out of Congress, Lagman plans to return to his first love—law practice, exclusively representing workers and unions.  He also plans to find more time for such uncharacteristic pursuits as collecting paintings and antiques.

“As I tell people, you don’t live by bread alone,” he explained.

An inveterate bargain hunter, he is particularly proud of getting valuable art and paintings at a good price, including a Hugo Yonzon find from an appliance store, and a Federico Alcuaz in an antiques shop, a skill he learned as a young boy who did the marketing for the family.

He even scores antique pieces from one of his favorite haunts, Annabel’s restaurant in Quezon City, where he managed to convince the owner to sell him some décor.

The importance of persistence is one of the lessons he learned from his mother, Lagman said, a lesson that has served him well in politics and one he will definitely use again.

Because he is not through with politics just yet, Lagman said. “You can retire from an elective public office, but you cannot retire from politics itself,” he added. •