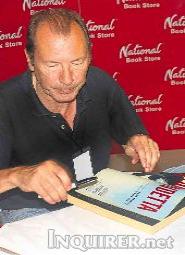 SOMEWHERE, wherever it is failed terrorists dwell, Guy Fawkes is sending hourly words of praise to David Lloyd. It was Lloyd, after all, who chose to pattern the look of the anti-authority hero “V” of “V for Vendetta,” after Fawkes, creating one of the most iconic looking figures in comic book history.

But Lloyd is far from a one-trick pony, having done other work, including “Hellblazer,” “War Stories,” “Global Frequency,” “Madrox,” and his latest project, “Kickback,” the latter of which he wrote, illustrated, inked and colored all on his own. Super! got to track him down when he was in Manila last May 6 to 10, for a series of signings sponsored by National Book Store, and talk to him about his illustrious career.

Super: What made you want to become an artist? And why a comic book artist in particular?

You can’t decide to become an artist; you’re either one or you’re not. It’s all about your innate talent, and I’m lucky to have that ability. When I was a kid, I wanted to be a commercial artist. I could draw, so I saw it as a possible career. I missed the opportunity to go to art school but my alternative was to train in an advertising studio, and I learned the basics there. The only problem was I didn’t draw figures, all I drew were still objects. In retrospect, it was very good training.

When I left the studio, I just wanted to be an illustrator of some sort. I ended up illustrating scripts as a career. When I was in the advertising studio, I did comic strips over the lunch hour and at home. So I was in love with the medium, but it wasn’t my first chosen career, so I suppose fate pushed me towards it.

I was naturally guided towards adventure stories. The single most inspirational piece of sequential art I saw as a kid was called “Wrath of the Gods,” drawn by Ronald Embleton and it was astounding, one of the two most important inspirations for me as an artist.

My favorite British artist, my all-time favorite is Joseph Turner, and his “Ulysses Deriding Polyphemus” is my favorite painting. And then Rembrandt, I love the great moody, strong gutsy work. Films inspire me very much as well, especially the cinema that I saw as a kid and as a teenager, Orson Welles, David Lane.
Your first work was “Night Raven,” and looking back 30 years, how do you feel about that work?

That was the first thing that gave me a following, and it’s my natural tendency to like that sort of story or subject matter. It was my first opportunity to visualize a character. It was also a turning point because the editor started his own independent publication, called “Warrior,” and wanted me to create a similar character, and that’s how “V for Vendetta was born. I was asked to write and draw that, but I knew Alan Moore at that time. Alan Moore is brilliant, and I knew it would be better if Alana would write it, so we got him on board and it worked out very well.

Alan Moore gives you credit for the Guy Fawkes look of the character. How did you come up with that?

It was an accident, really. We had all of the parts of the jigsaw of this character, apart from the detail of his motivations and his appearance. We had this freedom fighter working to bring down a fascist dictatorship in a future England, and a kind of vague idea that he had some sort of personal grudge.
I was more interested in the idea that this guy was just an ordinary person. So this was the problem, and I was just thinking of it one day and I just thought of Guy Fawkes, and he was a revolutionary character, a historical character. We needed him to be sort of crazy, so what would be crazier than adopting this persona of a character in the past and adopting his mission as well?

How did you find the movie adaptation of “V”? How did you feel about Alan giving you all the credit and not wanting to have anything to do with the movie?

That’s actually misinformation, Alan wasn’t even approached, but certainly his attitude towards it was something antagonistic from what I know. And the Wachowskis never asked me to work on it. I knew they were fans of it, so I hoped for the best.

Alan had a bad experience with Hollywood, and also, with “V.” He got into a sort of personal battle with the producer when the movie was being promoted. I think that just hardened his attitude and I feel very sad about that. And the saddest thing was that he took his name off the movie. He’s his own man and I can’t really argue with that.

For myself, I thought the movie was a very good job. I would have liked it to be much more close to the original, but more importantly, it minted the central idea of the original, which is the importance of the individual to maintain his individuality at all costs.

What’s your next work going to be?

I’m interested in online storytelling, not just putting a comic online though. I think that’s kid of crazy. There should be something more than just putting a comic page on a computer screen, and there are different ways of doing that. I’m looking for the best way to do that, to tell a story, produce a graphic novel week by week, month by month. Now obviously you can do that just as a showcase and then sell the book afterwards.

There have been some examples of that working well. But if I do something like that, I would like to earn money. I kinda regret that a lot of ideas I get, I can’t do. I have some nice ideas but if I did all of them, every one of them taking two years, I’d be fixed for the next ten, so I’m not sure if I want to do that. If I invest time in something, I’ve got to get results and it has to be seen.

Are there any creators you’re particularly fond of right now?

No, I think what’s great right now is that there are tons of fantastic artists. I’m constantly meeting great artists when I go to conventions, and there are great artists in the Philippines. What  I think is great is that even though the sales of comics have dropped from their peak 10 years ago, maybe, there are still people who want to do it. It’s a passion. If you become successful, you can be paid well in this business but generally speaking, it’s a low-pay work and to do it you have to be passionate. That’s the great thing about this medium—the people working in it are really passionate.