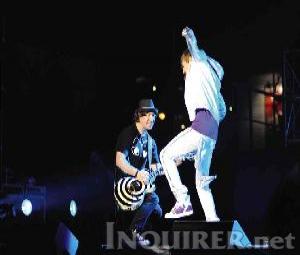 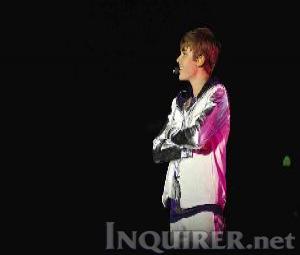 WE HAVE to admit, we’re still a little deaf.

That’s what happens when you spend an evening surrounded by screaming teenage girls.

The screaming started as early as three in the afternoon, as Justin Bieber’s band took over the stage at the Mall of Asia Concert Grounds for a sound check. And the screaming was just half of it. Girls chased cars, vans, mini buses—any vehicle that they felt might be carrying their beloved Bieber. Even Tim Yap was chased as he left the backstage area—his bright purple jacket made him a Belieber magnet.

Purple was without a doubt the color of the day. Fans came decked out in Justin’s favorite color—purple shirts, skirts, shoes, dresses, hats.

The rest of Mall of Asia joined the fun—practically every store had Justin’s songs blaring from their speakers.

There were banners and baller bands, pinups and posters. One girl carried a huge sign that read “OLLG.” She wanted Justin to make her his One Less Lonely Girl, the girl he would serenade onstage. But it wasn’t her lucky night.

Justin’s team handpicked another girl—also dressed in purple, with a purple Lakers cap on her head—to share the stage with him. “I love you,” she said to him as she sang to her.

Despite being sick for days with a chest infection, Justin Bieber was ever the trooper, singing not just his songs but a couple of covers (Edwin McCain’s “I’ll Be” and a few bars of Michael Jackson’s “Gotta Be Starting Something”). “It’s hot here—and I’m not talking about the weather,” he said as fans screamed. He also had fun playfully teasing his audience. When they screamed for him to sing his hit “Baby,” he sang “Rock A Bye Baby” and Britney Spears’ … “Baby One More Time.”

Post-concert, Justin’s fans have gone crazy trying to track down his One Less Lonely Girl in Manila. Three names surfaced—Kathleen Kaye Pesante, Leonest Franco and Alyssa Elasin, with Facebook pages quickly created for all three girls. But even the concert organizers cannot confirm the girl’s identity. And rumors that the girl is related to an executive from Smart, one of the show’s major sponsors, proved to be unfounded. “The person was chosen randomly by Justin’s team. We were the presentor of the program but Justin’s team ran the show. It was Justin’s choice,” said Mon Isberto, Smart Communications spokesperson. 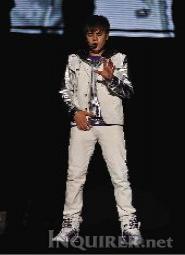 “Everyone can be my One Less Lonely Girl,” Justin said to local media hours before the show.