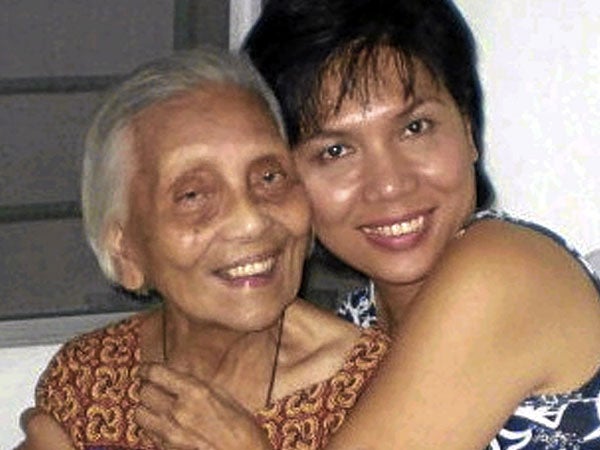 A helping hand for caregivers

Three siblings – half of an entire brood – sat at the last row of the assembly. They had planned on being at the forum-workshop in full force, all five who are in the country, drawn by a need to understand and cope with a situation suddenly thrust upon them as a family.  Their mother was diagnosed in 2009 with early dementia due to Alzheimer’s disease.

A few rows in front of them sat a 77-year-old man who had travelled alone from San Pablo, Laguna to Quezon City on a rainy morning.  He had hoped to get as much information as he could, he said, to pass on to his wife who was a caregiver for an octogenarian with Alzheimer’s in the United States.

Slipping into the hall just in time for the start of the presentation were five young men and women in medical scrubs.  They work as nurses and caregivers in a home for the elderly with facilities in three cities, and they had this morning off for staff development.

A gaggle of elderly women, obviously regulars of the gathering, teased each other as they ran through their current ailments, symptoms and homespun treatment.  One of them volunteered, half-jokingly, that she comes religiously to find out “what to expect as I grow old, if and how I can prevent it, and whether I’m getting the care I should.”

The theme for that Saturday morning session: caring for, and management of, older adults with dementia.

“There are almost as many reasons and stories as there are people who come to our forum,” said Adele Joaquin, president of Bantay Matanda, Inc., which organizes the regular monthly forum-workshop, held at the Christ the King Seminary in Quezon City.

For Adele, these assemblies are occasions for people who care for elderly family members to meet and share experiences, discover ways of coping, and find comfort and reassurance.

Bantay Matanda hopes to address the need for greater awareness and education on the principles and techniques of caring for the elderly in the context of the Filipino family system.  The objective was distilled from Adele’s own experience as primary caregiver for her mother, Encarnacion Joaquin, who was diagnosed with vascular dementia in 1998.

“I knew nothing about the condition then.  I didn’t understand, and I didn’t know who to turn to,” she recalled.

Adele recounted how she started suspecting that something was amiss when her mother “started acting strange. She wasn’t the mother I knew, a woman who was so gentle.”

She decided to seek medical help when, during an argument with her mother over an otherwise trivial issue, the older woman picked up a wooden bar and threatened to hit her with it.  The initial diagnosis by a neurologist was Alzheimer’s disease, for which she was given the standard medication.  But when her condition seemed to worsen, Adele  sought out a psycho-geriatrician, who introduced her to a condition known as vascular dementia and with it, a whole new world of caring for a loved one afflicted with an illness for which there is no cure and medications only delay the progress of the disease.

“In such cases, caring for the elderly requires more than just physical presence –and it cannot be the concern of just one member of the family,” said Adele.  “But given our Filipino culture, this responsibility is often ‘assigned’ to the female members of the family,” said this youngest and only daughter among six children.

Through the monthly lay forum, which today is the primary vehicle for achieving Bantay Matanda’s mission of consciousness-raising, Adele is able to reach out to other caregivers and their families to at least equip them to address the challenges that come with caring for an elderly patient at home.

The exchange among participants during that session on dementia was just as enlightening as the speaker’s lecture.

Armando Romero asked, in behalf of his wife, what she as a caregiver could do to shorten her patient’s bathroom time, which would sometimes stretch for two hours.

Ruby Rosa F. Leoparte, one of the three siblings present, recalled how she once offered to assist her mother as she bathed to find out why she took so long in the bathroom. ”I watched as she shampooed her hair repeatedly, forgetting, within the two minutes it took to rinse out her hair and finish her bath, that she had already done that.”  She gently told her mom that she was done with her bath and  it was time to towel off – pointing to her palms, wrinkled from being under the water for too long, to prove her point.

At the end of the forum, Ruby Rosa and her two siblings, Juan Folloso Jr. and Raquel Perez, sought out Adele for an extended sharing and consultation.  They had found a kindred soul who well understood the initial confusion that they were going through and was willing to take time out to see them through it.

Family counselling is also one of the services offered by Bantay Matanda, which Adele provides together with geriatrician and BMI’s health director Dr. Deana Santos-Ringor, and Antonio Kosca, who with his wife Tita, gives inspirational talks for the elderly.

In addition to its regular workshops on caring for the elderly and their caregivers, Bantay Matanda also hopes to be able to raise enough funds to launch “Golden Moments,” a one-hour television program, and eventually open a daycare facility for the elderly.

“We still have a long way to go,” Adele acknowledged.  “We do believe that the mission of Bantay Matanda – the organization, as well as its actual translation of caring for the elderly – is to achieve the ideal setting of getting everyone involved.”