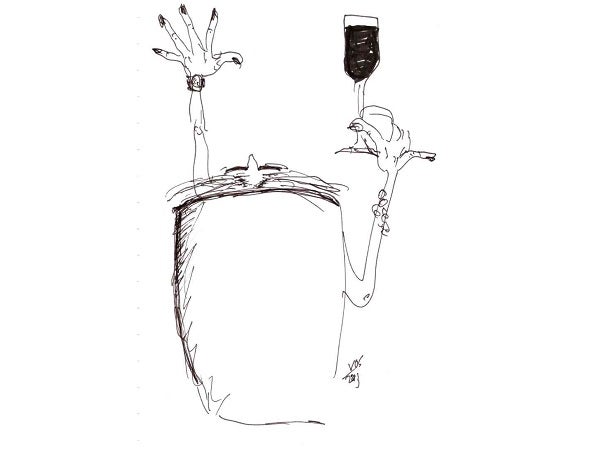 “A TOAST to me,” ILLUSTRATION BY VERGEL SANTOS

Taking care of me

The time has come to “take care of me.”

Financial guru Suze Orman used the phrase to set the focus of senior priorities, and I have to admit the idea feels strangely new, and rather daunting—definitely more daunting than all the care-giving I’ve been doing as mother to four children, grandmother to five grandchildren, and an only daughter to parents who lived to 85 and 91. In fact, it’s the last experience that has drawn me to the idea of taking care of me.

While my peers and I agreed that the time is here and now, we have different takes on the matter, although, again, our objective is the same: to simplify life for ourselves and put things in such order so that no complications are caused by our departure.

One friend was proud to announce, “I don’t have anything in my name anymore!”

“What about the house you live in?”

“Everything is in my children’s name!”

Obviously, she didn’t have a grandmother like Lola Enchay to warn her about the all-too-real possibility of growing old broke for being so over-trusting.

It’s not so much a criticism of children as a general mistrust of human nature when it comes to money matters. Among her stories I dare not forget is about a couple who transferred the title to the house they lived in to their children, and ended up staying in the garage for the rest of their days.

As it happens, my friend herself has not at all discounted such a grim possibility. She keeps an undated deed of return sale in case she decides to take the property back.

Anyway, I’ve known enough cases in my own time to make me reject outright the idea of prematurely leaving anything to children.

One involved the son of another friend. Given the title to a piece of the family compound, he eventually sold both the lot and the house he had built on it and moved to a condominium. The buyer, a stranger thrust into the family compound, had to build a wall before mutual discomfort degenerated into something more serious.

But that’s not the end of it. When the son’s marriage failed, he returned to the compound to live with his parents, leaving the condominium unit to his wife and children.

A more recent, similar case involved an only son who came to his sudden fortune in a strategy to avoid inheritance tax. A number of properties had been titled to him before his father went into a delicate surgery.

The father survived, indeed went on to recover fully, but not before he and his wife could do anything to keep the properties out of contention when their son’s marriage crumbled. The wife has sued for a separation of assets.

I myself don’t have that kind of inheritance to distribute—a couple of modest properties are just about it—and that’s precisely why I’m careful. One little wrong move can put me in penury.

Indeed, a premature distribution of assets goes against my philosophy of taking care of me, a philosophy based more or less on the Orman principle of wealth making and managing.

Although generally cast as a financial guru, Orman goes beyond finance. She attacks any mind-set that limits one’s capability for growth, not only financial, or debases one’s self-worth.

I’m convinced that the best way to ensure my financial security, as well as, for that matter, that of my children, is by upholding my own self-worth. And that begins with believing in myself, being comfortable in my wealth, and feeling truly deserving of it.

Equally important is trusting in my children’s own capability to take care of themselves, so that whatever comes from me is just a bonus.

Not that I’ve always thought this way. There was, in fact, a time when I felt I owed my children, say, a roof over their heads and, unable to provide it, felt guilty. The trick, I’ve come to believe, is to make sure my relationship with them is not based on money dependence.

In the meantime, I preside over my assets and grow them for myself—to do otherwise is to repel wealth of all sorts. And what gives me great pride and pleasure at this age is being able to do what I love doing and getting paid for it by my worth—writing this column, for instance.

Orman has also taught me the true meaning of generosity—again the kind that’s not a twisted devaluation of my own self-worth. I do still give, but never at the risk of my own financial security, of endangering my capability to take care of me. As in an emergency landing, I am to put the oxygen mask on myself first before attending to my child.

But, like everything else, the philosophy of self-worth can be stretched beneath virtue when taken without a sense of gratitude and moderation. Self-worth is not all about making and having wealth.

To be sure, I’ve seen enough relatives whose family lives are in turmoil precisely as a result of having too much money and not much else.

As another teacher of mine says, “It’s in moderation that perfection lies.”

And from where I stand, life, indeed, is looking just perfect.