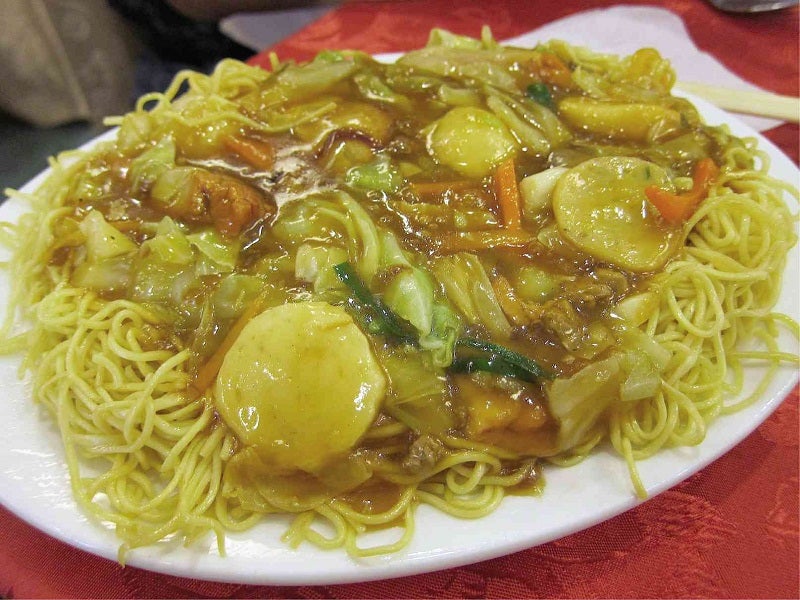 Today we remember the trials and sufferings of our Lord Jesus Christ. Repent and try to wash ourselves of our sins, and abstain from meat as sacrifice.

In a few days, we get to celebrate the resurrection of Christ by feasting on a great Easter Sunday lunch. It will be the Catholic Church’s first Easter with Pope Francis at the helm, so there’s an extra reason to celebrate.

In the spirit of Lent, let me share details on an interesting Chinese restaurant in Quezon City that I discovered, thanks to Inquirer columnist Neal Cruz and superfriends. They had lunch here during the Chinese New Year.

This place is special because it was one of the restaurants that catered to Pope John Paul II when he visited the Philippines to celebrate World Youth Day in 1995.

It looks like a regular Chinese restaurant, reminiscent of your favorite Escolta joint. An image of a giant golden dragon against a red backdrop greets the visitor. Aquariums with fish that you may later feast on line a wall. You will also notice the red tablecloth and the waiters in white polo and red pants or skirts.

Noticeable is the memorabilia on display by the entrance: the plate that Pope John Paul II ate from, the utensils and wine glasses he used, and photos of him with the staff who served

A member of the staff who had the honor of serving the Pope is still with the restaurant,  and we were luckily waited upon by this very same server, Mang Johnny. Like the waiters of legendary restaurants Star Café in Baguio or Prince Albert at the InterCon, Mang Johnny was a joy to have by our side.

A blessing in disguise, as we had Lapu-Lapu instead.

The place is no Shang Palace, and the restaurant’s name is highly contestable as a Shangri-La. The Lapu-Lapu had to be re-cooked to “well-done” as it was slightly gummy, although shown in live form in a pail before being cooked. The cold cuts are, shall we say, on the pious side.

But redemption lies in the duck. While it is no Peking Garden or Hai Shin Lou, a quick browse-through of tables showed that this was the easy favorite. Deep-fried and spicy, the dish is highly addictive, while not exactly heavenly. The pancit canton is also hearty, and almost every table had it.

Another interesting thing—a place for the Pope is also a place for politicians (not necessarily for penance!). On my first visit, Quezon City Mayor Herbert Bautista and his team were there in full force. On my second visit, it was Caloocan’s Enrico Echiverri who was there. I can’t find the common thread, but that was what I witnessed.

Maybe it’s a common love for the restaurant’s butchi, which always arrives fresh and hot. It could be the great waitering expertise of good ol’ Mang Johnny, who makes sure “happy ka.” Or it could be the good vibes from that blessed plate of Pope John Paul II on the wall.

Whatever the reason, the place is always full. And for that reason alone, this place is, indeed, blessed.