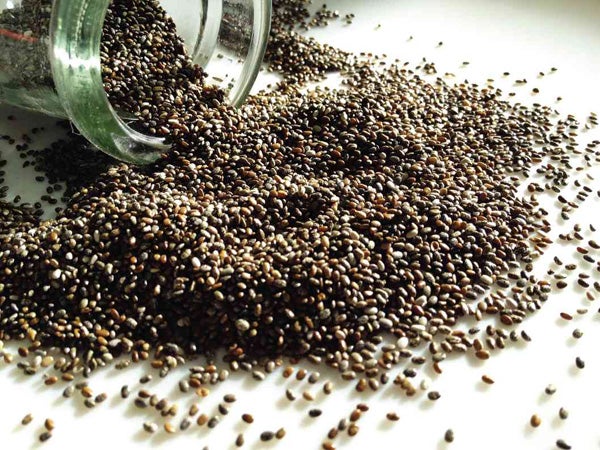 Why chia seeds are today’s ‘it’ food

Runners believe it makes them go the extra mile, bodybuilders swear it helps them build more muscle mass. Heck, even ancient Aztec warriors are believed to have sustained their energy with just a tablespoon of this exotic seed.

If you’ve been working out in the gym recently, chances are you’ve heard about the mighty chia seeds. But are chia seeds really the superfood many claim them to be, or is their sudden rise to popularity a mere product of clever marketing?

The fitness industry took interest in chia seeds when American author and journalist Christopher McDougall wrote about it in his 2009 New York Times Bestseller book “Born to Run: A Hidden Tribe, Superathletes, and the Greatest Race the World Has Ever Seen.”

In the book, McDougall documented the Tarahumara tribe in Mexico, who ran ultra marathons (typically a distance of more than 100 km) at incredible speeds with minimal or no injuries at all.

The tribe’s choice of energy drink? A “home-brewed Red Bull,” wrote McDougall, called chia fresca, made of chia seeds mixed in water with sugar and lime. A tablespoon of chia, McDougall wrote, “is like a smoothie made from salmon, spinach and human growth hormone.”

Wrote the author, “If you had to pick just one desert island food, you couldn’t do much better than chia, at least if you were interested in building muscle, lowering cholesterol and reducing your risk of heart disease; after a few months on the chia diet you could probably swim home.”

Shy Sison Vesagas, a tax lawyer and mother of one boy, first heard about chia from her triathlon teammates. Curious, she tried the seeds December 2012 and noticed that, since taking the seeds, she doesn’t get cramps anymore while running. She said long runs, anything over 15 km, always gave her cramps. She also noted she has been running faster and longer, and even her skin got clearer (she’s also a smoker).

A vegetarian for 19 years, Vesagas said she adds a tablespoon of chia seeds to her coffee three times a day. Chia, when added to water, turns into a gelatinous, chewy substance. “I feel bolder now, more confident, since I don’t get cramps anymore,” she said.

Chia, or Salvia hispanica, is a member of the mint family from Mexico and South America. Eaten raw or added to dishes, chia seeds do pack a lot of bang for the buck. Their Omega-3 fatty acids are much higher than salmon, they’re a good source for complete protein, have more fiber than flax seed, and contain a wealth of antioxidants and minerals.

International Krav Maga Federation instructor Abe Tolentino began taking chia seeds over a year ago when he read about their anti-inflammatory properties. As an instructor, he said, his joints took a beating. He makes green smoothies or puddings with chia seeds. He admits, though, that he is not really sure if the chia seeds have been beneficial so far.

“I have no clinical studies to show that they make a difference. I’m generally a healthy person. For my raw vegan friends, though, it’s the highest source of Omega-3 from a non-animal source,” Tolentino said. His diet consist of 50-70 percent raw veggies per day.

There are also claims that consumption of chia seeds promotes weight loss because it curbs the appetite, balances blood sugar levels, and lowers cholesterol and trigylcerides and blood pressure. Registered nutritionist, dietitian and weight-management consultant Pam Joyce Laiz, however, cautions the public to remain skeptical of any product whose claims have yet to be extensively studied by science.

“While it is true that chia seeds contain so many nutrients in just one small serving, claims of their benefits are not proven and need more scientific studies. These are all testimonials. There is, in fact, no such thing as ‘superfood.’ That’s a term coined by marketing people. You cannot get complete nutrition eating chia seeds alone,” Laiz said.

She said Vesagas’ cramp-free running, for instance, may be attributed to the fact that chia seeds are high in potassium and are extremely hydrophilic. Meaning, they hold water well and retain the electrolytes. For endurance athletes, this is good news, Laiz said. But unless you’re athletic, she said it is best to stick to just one tablespoon or less of chia seeds a day.

Chia seeds are high in fiber, so that consumption of more than a tablespoon a day can cause bloating and constipation. She said that is generally not a problem for active people such as athletes and fitness buffs, who tend to consume a lot of water every day.

The Omega-3 fatty acids in chia seeds, as in most plant sources, are also short-chain, alpha-linolenic acid (ALA), not the long-chain eicosapentaenoic acid (EPA) and docosahexaenoic acid (DHA) found in fatty fish like salmon. So don’t take chia seeds expecting the benefits of fish oils. The body, however, converts ALA into EPA and DHA, albeit in really low doses.

Although it is not known if both short- and long-chain acids are equally beneficial, especially since EPA and DHA seem to be the popular choice for Omega-3, adding both into your diet, said Laiz, is, in fact, beneficial to the body.

“ALA promotes integrity of cells in the colon. That means a healthy metabolism and digestion. One is not necessarily superior over the other. What’s important is, you get the benefits of both short- and long-chain acids,” Laiz said.

Excess consumption of Omega-3, she said, could cause the blood pressure to dip extremely low, dilate the blood, and malabsorption of other nutrients. Laiz said the daily recommended intake of Omega-3 is only 300-500 mg per day, although it is still safe to go up to 3 grams per day (3,000 mg). Chia seeds, she added, contains around 2,250 mg per tablespoon. (A tablespoon has 68 calories.)

Since chia seeds are a complete source of dietary protein, packed with all the essential amino acids, muscle wasting, a concern mostly by bodybuilders and those wanting to build muscles, will be minimized. Muscle wasting happens when proteins break down faster than they are replaced. Amino accids, such as those contained in chia seeds, are the body’s building blocks.

Chia seeds, however, do not act like diet pills. Laiz said because digestion is slowed down, it can give you the feeling of fullness. But this feeling, also caused by its high fiber and protein content, does not necessarily curb the appetite. If you want to lose weight, the most sensible thing to do is to cut your calories and start moving.

Since the transit time in the gastrointestinal tract is slow, the conversion of carbs to sugar is also slower, so that may stabilize blood sugar, she said. Since it lowers the blood pressure, it may also be beneficial to hypertensive people.

But before running to your nearest health store, Laiz said chia seeds interact with drugs. If you’re taking medications for, say, diabetes, hypertension or cholesterol, consult with your doctors first. She added that heart patients must also seek their doctor’s advice before adding chia seeds into their diet.

Laiz’s conclusion? Chia seeds are a good source of nutrition—loaded with high nutritional values than most food sources in such a tiny serving—but they do not provide you with everything you need. A well-balanced intake of nutrients is still recommended.